Archaeologists date find of Canaanite official’s burial to reign of Seti I, who conquered region in 13th century BCE 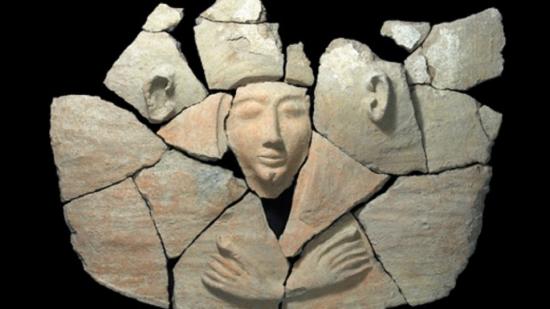 Parts of the anthropoid coffin’s lid after an initial cleaning. (photo credit: Clara Amit, courtesy of the Israel Antiquities Authority)

A late Bronze Age tomb containing bronze and ceramic votive artifacts and a ceramic coffin — the final resting place of a man who died some 3,300 years ago — was discovered by Israeli archaeologists in the Jezreel Valley last month, the Israel Antiquities Authority announced Wednesday.

But while the objects in the grave point to Egyptian influence, researchers say it is likely the tomb belonged to a local Canaanite carrying cultural hallmarks of a powerful ruler of the Nile kingdom.

The find, which also contained a golden scarab, was discovered by workers installing a natural gas pipeline near Kibbutz Sarid, about 15 kilometers (10 miles) southwest of Nazareth in the northern Jezreel Valley.

A team of Israel Antiquities archaeologists were called to perform a rescue operation after the site was uncovered.

Excavation directors Dr. Edwin van den Brink, Dan Kirzner and Dr. Ron Be’eri of the IAA said in a statement that they found “a cylindrical clay coffin with an anthropoid lid (a cover fashioned in the image of a person) surrounded by a variety of pottery consisting mainly of storage vessels for food, tableware, cultic vessels and animal bones. As was the custom, it seems these were used as offerings for the gods, and were also meant to provide the dead with sustenance in the afterlife.” Also in the grave were a bronze drinking bowl and a bronze dagger, all of which bore the marks of Canaanite, not Egyptian, design.

On the lid of the coffin is a naturalistic impression of a man’s face, with stylized hair in an Egyptian style, ears and, like sarcophagi of Egyptian pharaohs, hands crossed over the chest in the manner of the deceased. Inside was the body of an adult male — likely a wealthy man or a Canaanite official — beside whom lay a small golden scarab seal bearing the throne name of King Seti I of Egypt, one of the most powerful rulers of the Nile over 3,000 years ago. 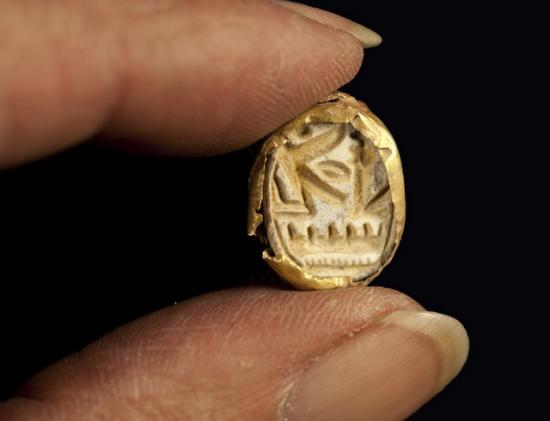 The gold scarab found at Tel Shadud inside an anthropoid coffin.(photo credit: Clara Amit, courtesy of the Israel Antiquities Authority)

Seti I ruled the Egyptian empire from around 1290 to 1279 BCE and is considered by many Egyptologists to be one of the most powerful kings of the XIXth Dynasty — which included his son Ramesses II. Because Ramesses II has been identified by some as the pharaoh of the Exodus story, Seti I has often been portrayed in film as the biblical king’s father. 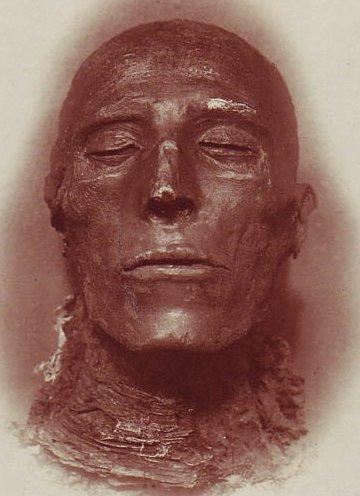 Pharaoh_Seti_I’s mummy (photo credit: Emil_Brugsch via Wikimedia Commons)
During the first year of his reign, Seti — also known by his throne name Menmaatre, “Eternal is the justice of Re” — launched a campaign to reconquer Egypt’s territories in Canaan, and marched his armies as far north as Beit She’an, south of the Sea of Galilee. Egypt then instated Canaanite vassals to rule the territory on the pharaoh’s behalf and levied indemnities to finance his vast construction projects.

The cylindrical coffin was a rare find, the likes of which has not been made in Israel for at least 50 years, Be’eri said. Similar anthropoid coffins from around the same period were found at Beit She’an, and Deir al-Balah and Tel al-Farah in the south. The coffin’s design, however, was markedly different from the Canaanite coffins dated to the same time period found at Deir al-Balah, in the modern Gaza Strip. 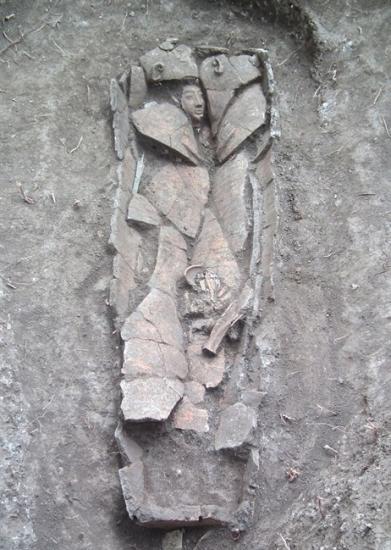 The clay anthropoid coffin found near Tel Shadud at the time of its discovery. (photo credit: Dan Kirzner, courtesy the Israel Antiquities Authority)

At the IAA labs in Jerusalem’s Har Hotzvim industrial zone, where the mask-like lid, dagger, bowl and scarab seal were put on display Wednesday, Be’eri explained that the man found inside the coffin was likely Canaanite rather than Egyptian. Egyptians traditionally buried their dead in Egyptian soil, and the grave goods were distinctly Canaanite. Four other bodies, likely members of the man’s family, were found buried nearby in a similar style.

“Canaanites… were not accustomed to burying themselves in coffins of this sort. The Canaanite style of burial is different,” and the man unearthed was laid to rest whole, in an Egyptian style, Be’eri said. “Completeness of the body is a basic thing in Egyptian burial, and that’s because [they believed] the soul of the dead… is meant to leave the body after death.”

Be’eri said the IAA intends to perform a more thorough analysis of the man’s remains to determine whether he was Canaanite or Egyptian, however.

The archaeologists dated the find to the Late Bronze Age based on the style of the coffin and set a latest possible date to the reign of Seti I because of the scarab seal found inside.

The artifacts, said Be’eri, demonstrates “the presence or very strong cultural influence of Egypt in the Land of Israel during the second millennium BCE, probably amid Canaanite society or in the Canaanite cities that dominated the Jezreel Valley.”