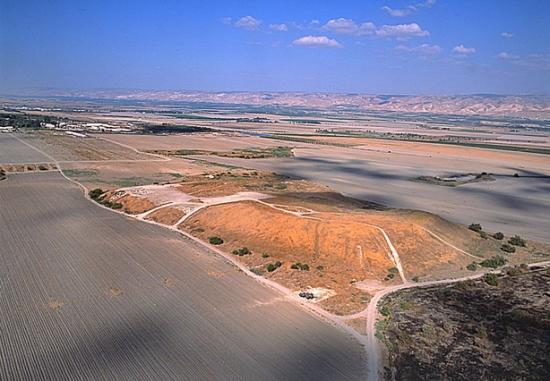 Tel Rehov, view to the north

During 16 years of excavating Tel Rehov in the Jordan Valley, archaeologists uncovered a 3,000-year-old, well-planned city.

They also found a unique building that might have been the house of Elisha the prophet.

"We found there figurines, clay figurines. We found large vessels -- like big vessels that were probably used for serving food, not for just the nuclear family, but maybe for a larger community," he said.

Mazar also pointed out the unique structure of the house.

"Normally the houses had one entrance leading to a large space with rooms all around," he explained. "This house was divided into two wings. The two wings were connected to one another through the backroom and each one of the wings had an opening to the street."

Outside the backroom were incense altars that may have been used to make an offering to God before entering the house to hear the prophet's message.

During the excavations, archaeologists discovered a special room inside the house with a table and a bench. They also discovered a pottery shard with the name Elisha on it, dated to the 9th century.

The discovery has led some to believe this was the room of the prophet Elisha.

"We found an ink inscription written in red ink on pottery, but it is broken unfortunately," Mazar said. "But we reconstructed the name as Elisha."

The prophet Elisha was born about seven miles from Tel Rehov in Avel Mehola and went throughout the kingdom of Israel, from Jericho to Samaria to Shunam.

"You know I cannot say for sure this particular Elisha that we found is the biblical Elisha," Mazar said. "You know it's very difficult to say, but it is very tempting because it is exactly the period when Elisha acted -- the second half of the 9th century BC."

Archaeologist Stephen Pfann calls the evidence consistent in many ways with the biblical account.

"With only six other people by the name of Elisha known in that time for a couple of centuries on either side, we can somehow believe that either there was just the luck that this holy man was also by the name of Elisha, or this was Elisha the prophet himself," Pfann told CBN News.

Another discovery pointing to the prophet Elisha are two different inscriptions mentioning the family of Nimshi.

"We remember that it was Elijah who was told to anoint Jehu, the son of Nimshi, to be the king," Pfann explained. "And he passed that on to Elisha who sent out one of his disciples to finally do the anointing."

Another inscription with the same name Nimshi was found about five miles away.

"So I came to this idea that perhaps the entire valley of Beit Shean, this beautiful fertile valley [with] food, springs, water, [and] good land was perhaps under rule, perhaps, or property of this family," Mazar said.

This family may also have had an unusual business: bee-keeping.

"Perhaps they were the owners of the apiary because one of [the] Nimshi inscriptions was found inside the apiary just between the hives," Mazar said.

"We saw that we have here a row of cylindrical, of clay cylinders. Each one of them is about 2-1/2 feet long and about 1 foot in diameter," Mazar continued. "We realized these must be bee hives."

This type of bee came from Turkey not Israel, indicating ancient trade relations between regions. They are the most ancient species of bees ever found in the world.

Many archaeologists shy away from drawing conclusions about the Bible, but some see it as a way of putting the pieces together.

"Archaeology is like a huge puzzle, you know, we add information from one excavation, a second excavation, a third excavation -- Meggido, Tel Rehov, Beit Shean…and together we bring it into a large picture, the large puzzle trying to decipher the material culture of the Israelites," Mazar explained.

For Cary Summers, who heads Nazareth Village, it's even more special.

"Well, it's like any other archeological site, in essence…every scoop of dirt it proves the Bible, one scoop at a time. And this site is absolutely magnificent dealing with the prophet Elisha," Summers told CBN News.

In this day and age, he said, it's even more important.

"There is always the skeptic who says, 'Show me the proof' and 'When you have the proof.' Basically, [we have] the tile that [was] found here with the name [and] also just the excavation itself," Summers continued.

"It's one more proof for what we call the doubting world," he said.

"For God to allow this to be unearthed at this time, I think it is again another indication that we are to aggressively go forward with this kind of data, this kind of research, this kind of archaeological dig," Summers said.

The future of the site is uncertain because its mud bricks are deteriorating. Researchers hope, however, it can be preserved to help future generations understand the Bible.