Chickens had begun to spread from Asia to the Near East thousands of years ago, but they were a spectator sport, not a food. 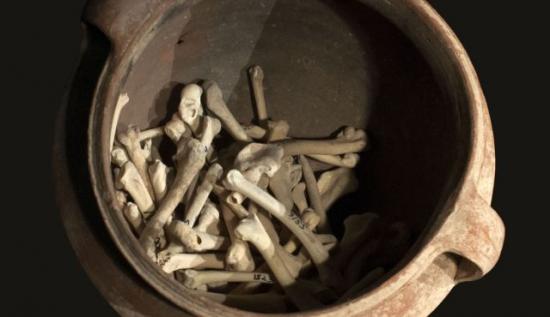 A cooking pot with chicken bones inside, found at Maresha Photo by Archaeology Dept., University of Haifa

Chickens may have evolved in southeast Asia and were first domesticated there, but their economic exploitation apparently began in ancient Israel. Piles of chicken bones discovered at the archaeological site of Tel Maresha, dating back around 2200-2400 years, are the earliest-known evidence of concentrated economic exploitation of the fowl, says a Haifa University archaeology team.

That's as opposed to pitting roosters against each other for fun. Cockfighting apparently began earlier – in Asia, well

over 8,000 years ago, says the team. Then chickens began to reach the Levant about 5,000 years ago. But the idea of eating the things rather than watching them savage one another apparently took a long time to sink in.

Not only did the team from the university's Zinman Institute of Archaeology find an "exceptionally high frequency" of chicken bones at Maresha. Most of the bones hailed from adult birds, and there were twice as many female-bird bones as male. These findings are strongly indicative that the chickens were being eaten, not exploited for sport - a conclusion also supported by butching marks on the bones.

Doctoral student Lee Perry-Gal speculates that as the chicken was domesticated for consumption, rather than sport or worship, it underwent breeding to become more docile.

Chicken remains were found at other archaeological sites dating from the Hellenistic period  (the fourth-second centuries BCE) around Israel. But they were a rarity. At Maresha, they constitute about 29% of animal remains found. At other sites, the proportion ranged from 1% to 13%.

Also indicative of the rising importance of the chicken during that era is the leap in the proportion of archaeological sites featuring chicken bones, from less than 3% in the Middle Bronze Age to nearly 50% in the Hellenistic period, say the researchers.

Why the chicken crossed the Mediterranean

Chickens as said evolved in eastern Asia and were evidently also first domesticated there, and in China, say the scientists in their paper, published in PNAS. They also note indications of chicken domestication in ancient India, dating from to the second millennium BCE. At that point, the bird began to spread out, including to the Near East.

The earliest chicken remains found in our region, in Turkey by the Mediterranean Sea, and in Iran and Syria, date back to the third millennium BCE, though there is an argument for even earlier chicken remains in ancient Egypt.

But these scattered chicken remains were rare and sparse, explain the archaeologists, and were certainly not great piles of bones indicative of feasting on fowls.

Also, ancient references to chickens in all these places relate to the cocks, not the females, and refer to them as belligerent exotica, not supper. At Maresha, for the first time, the prevalence of females and sheer amount of bones suggest the first concentrated farming for consumption.

How exactly the birds spread from southeast Asia to the Near East and Europe is not known.

It bears stressing again that the chicken was known, it just was not, apparently, being eaten. Chickens are mentioned by Theognis of Megara in the sixth century BCE, the paper points out and from the 7th century BCE, the ancient Greeks were painting cocks on to pottery. But the earliest sites in Europe clearly showing chicken domestication for eating are at least a hundred years later than Maresha – sometime in the 1st century BCE.

The archaeologists conclude that chicken husbandry may have begun in the southern Levant, and spread from there to Europe. Their dissemination may have been helped by the fact that the inland city of Maresha, which is mentioned in the Book of Joshua and in the Books of Chronicles, sat on a major trading route, though by the late second century BCE, the town had been destroyed, and was never to rise again.