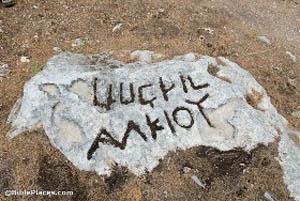 The 12th boundary stone from Tel Gezer, discovered over a decade before this latest find. The bilingual boundary stone features Greek and Hebrew text with personal and geographical titles. Photo: Bibleplaces.com, Judah and the Dead Sea Collection

Archaeologists working at the Biblical site of Tel Gezer discovered a boundary stone inscribed with both Greek and Hebrew text dating to the period of conflict between the Seleucids and the Maccabees. This is the thirteenth known boundary stone after over a century of excavations at Gezer, and it is the first to be found in over a decade. Archaeologists from Southwestern Baptist Theological Seminary also rediscovered another boundary stone originally discovered in the 19th-century by the French explorer Charles Claremont-Ganneau, but lost to the archaeological community for over a century.

In a Biblical Archaeology Review article promoting preservation at Gezer, BAR editor Hershel Shanks described the Biblical and archaeological history of the site.

Gezer is mentioned frequently in the Bible. Although Joshua defeated a coalition of Canaanite kings that included the king of Gezer, the Bible does not say that Gezer itself was captured by the Israelites (Joshua 10:33; 12:12). Gezer was allotted to the tribe of Joseph (or Ephraim) (Joshua 16:3, 10; Judges 1:29; 1 Chronicles 6:67; 7:28), but we are also told that the Israelites “did not drive out the Canaanites,” who dwelt in Gezer (Joshua 16:10). Even King David was unable to bring Gezer into the Israelite kingdom.

Finally, when an Egyptian Pharaoh (probably Siamun, in about 960 B.C.) gave his daughter in marriage to King Solomon—the only recorded instance of a Pharaoh’s daughter being permitted to marry a foreigner—the Pharaoh ceded Gezer to Solomon as part of his daughter’s dowry. (1 Kings 9:15–17). In the early years of Solomon’s reign, Egypt had launched an invasion of Palestine and had conquered Canaanite Gezer. Undoubtedly, Solomon then mobilized against an Egyptian attack on his own Israelite kingdom. But Israel must have been the greater power because at this point Egypt apparently decided to abandon the invasion, opting for a diplomatic rapprochement by marriage and territorial concession. Thereafter, the Bible tells us, Solomon fortified Gezer, along with Jerusalem, Megiddo and Hazor (1 Kings 9:15). Twentieth-century archaeologists have found irrefutable evidence of these fortifications at Gezer, including not only the magnificent gateway but also a casemate wall (a double wall divided by partitions into rooms) attached to it.

Gezer also has special significance in the history of archaeology. Gezer was the first Biblical city to be identified by an inscription found at the site. Even today only a handful of sites—Beth Shean, Arad, Hazor—have been so identified. In 1873, the great French scholar Clermont-Ganneau found a boundary inscription dating from the Herodian period which reads in Hebrew script, “boundary of Gezer.” 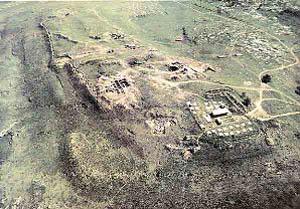 This aerial photograph from the early 1980s shows the landscape around the main site of Tel Gezer. Thirteen inscribed boundary stones have been discovered in the area around Gezer.

This final boundary stone was rediscovered in this season’s excavation. According to the excavator’s press release, the boundary stones reveal the Jewish occupants’ concern over keeping their fields according to Jewish law. Many of the boundary stones include the inscription “Region of Gezer” in Hebrew along with “Belonging to Alkos” in Greek. The newly-discovered thirteenth stone follows the inscriptions known from other boundary stones very closely, with a few exceptions. The weathered letters are larger than on other known examples, and the Hebrew and Greek text is written on the same side of the stone.

After a century of excavation, Gezer continues to produce interesting finds. In 2011, excavations of a Canaanite water system at Gezer uncovered a natural cave at the base of a tunnel system dug in the early 2nd millennium B.C.E.

More details on the Southwestern Baptist Theological Seminary excavations will be made public by the upcoming Hadashot Akrheologiyot publication on the first five years of the survey.