A massive 3,300 year-old complex, which archeologists believe may have been used by a religious cult, has been discovered at the Tel Burna excavation site east of Kiryat Gat, in central Israel. The discovery was reported by the Live Science  website.

One possibility is that the site was used for the worship of Baal, the Canaanite storm god, according to Yitzhak Shai of Ariel University, who is directing a research project at the site. But it's also possible that a female deity, such as the ancient war goddess Anat, was worshipped there. 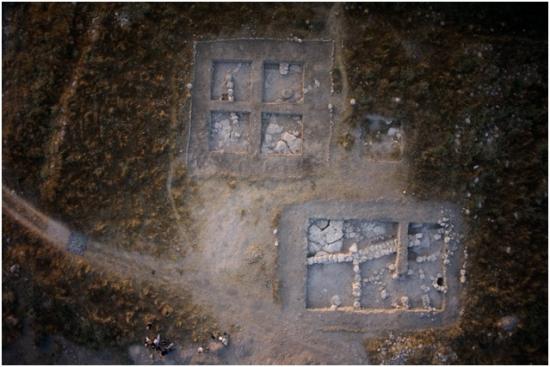 The foundations of the ancient cult complex in Israel were made of field stone (shown here). Photo courtesy Professor Itzhaq Shai.
Though not yet fully excavated, the site is believed to be very large. The courtyard alone was 52 square foot (16 square meters.) Inside the complex, researchers discovered three connected cups, fragments of facemasks, massive jars that are almost as big as a person and burnt animal bones that may indicate sacrificial rituals. 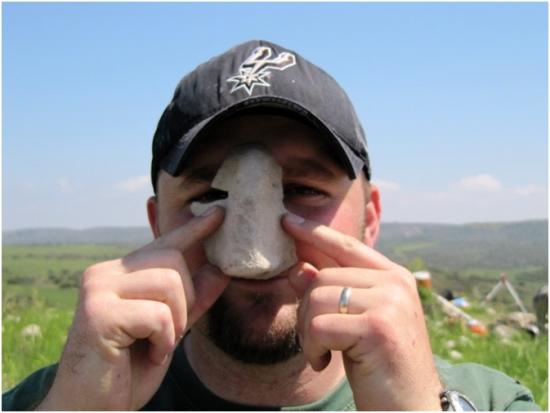 Fragments of facemasks, like this one, were discovered in the 3,300-year-old cult complex at Tel Burna.
Credit:  courtesy Professor Itzhaq Shai.

"It is difficult to determine exactly who the masks are depicting and whether it is a specific image," Shai said. "In general, masks are known to have been used in cultic ceremonies and processions."

The three connected cups, which were found in the cultic complex, were likely imported from Cyprus, the researchers say. The artifacts' use remains a mystery. "In the past, joint vessels similar in concept as the one found here have been considered as cultic objects," said Shai.

Dvory Namdar, of Hebrew University, is currently analyzing the walls of the vessels to determine what was put in them, something that may shed light on their purpose.

The researchers also found massive "pithoi" vessels (large storage jars), some almost as big as a person. "Along the eastern edge of the exposed area of the building, a row of sunken pithoi, with several smaller vessels found inside of them, were found," said Shai. Two of the vessels were imported from Cyprus, as indicated by their design.

The complex yielded many other finds, including a cylinder-shaped seal, goblets, chalices, broken figurines that look part-human and part-animal, and even a scarab, an artifact with an Egyptian hieroglyphic inscription on it.