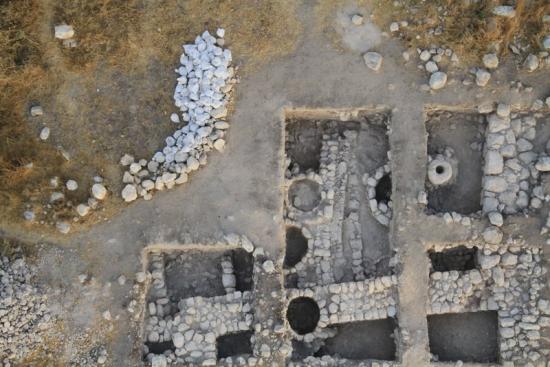 Aerial view of one of the excavation areas at Tel Burna. Courtesy Itzhaq Sahi and the Tel Burna Excavation Project

An archaeological team is excavating a site that is showing evidence of having been a fortified settlement belonging to the Kingdom of Judah both before and during the time when the Assyrians were sacking the kingdom’s cities in the 8th century BCE.

Known today as the site of Tel Burna, the mound is located in the fertile rolling plains of the Shephelah, a region between the coastal plains and the Jerusalem mountains in central Israel. It is an area that, anciently, served as a strategic borderland between the Philistines in the west and ancient Israel and the kingdom of Judah to the east. Today, Tel Burna is surrounded by other ancient sites that have been intensely investigated and excavated over the years.  But this site has seen relatively little exploration and research—until now.

According to project director and Ariel University assistant professor Dr. Itzhaq Shai, the site was long known to exist but full-scale excavations did not begin at the location until a few years ago.

“Several surveys have been conducted in the region,” said Shai, “however, the site had never been excavated until the summer of 2009, when we began a long-term archaeological project on the site.”

Though still young, the excavations have already revealed important clues to the site’s identification within the context of biblical history.

“The identification of the site has been debated for more than a century,” states Shai. “There are scholars who have claimed that Tel Burna is biblical Libnah, which was mentioned several times in the Bible. This identification was based mainly on geographical and historical arguments……… To date, there are other candidates for the location of ancient Libnah, including nearby Tel Zayit; however, the exposed archaeological remains at Tel Burna support this identification, with both the geographical, survey and excavation data fitting well with what we know and expect from a border town in the Iron Age.”

The biblical account has it that Libnah was one of the places the Israelites stopped during the Exodus, and became a town in the Kingdom of Judah.  It was the site of a revolt II Chronicles (21:10) during the reign of King Jehoram of Judah because the king "had abandoned [the] God of his fathers." Josiah, another king of Judah, married Hamutal, the daughter of Jeremiah of Libnah (1 Chronicles 3:15; 2 Kings 23:31-32;2 Kings 24:17-18;Jeremiah 22:11), whose sons Jehoahaz and Zedekiah also became kings of Judah. And in 732 BCE, 185,000 Assyrian soldiers under King Sennacherib were, according to the biblical record, killed by an angel of God while they were encamped near Libnah, preventing them from advancing to Jerusalem from the Judahite city of Lachish.

Thus far, excavations have revealed part of a 13th century BCE public structure, with finds that included Cypriot votive vessels, a scarab with dozens of beads, a cylinder seal, a rich ceramic assemblage of goblets, chalices, Cypriot zoomorphic vessels, local and imported Cypriot and Mycenaean figurines, fragments of ceramic masks and two large Cypriot pithoi. “All in all, the building size and the effort that was undertaken in order to build it alongside the presence of unique vessels indicate that this was a 13th century public building where ritual activity took place,” said Shai.

Clear evidence of fortification walls was also uncovered defining the summit of the mound, and dating suggests their use during the 9th and 8th centuries BCE.

Said Shai, “the Iron Age II (1000 – 586 BCE) wall reflects the role of this site during this period. The location of Tel Burna—midway between Gath, the dominant Philistine city in the Iron Age IIA (1000 – 925 BCE), and Lachish, the main Judahite city, monitoring the road along Nahal Guvrin, with visibility all the way to the coastal plain — would account for the investment of the central authority of Judah in establishing such a walled city so close to the city of Lachish.”

Other finds included LMLK (of or belonging to the king – like state property) and Rosette stamped pottery handles and pillar figurines, all indicative of a Judahite presence. Six silo structures were also uncovered. 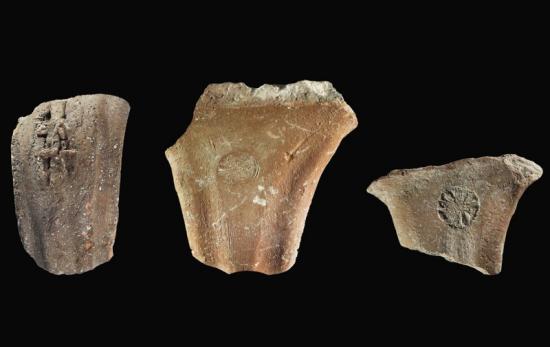 “The Iron Age remains attested to the importance of the settlement at the site and that it was a fortified Judahite border site facing the Philistines in the west,” summarized Shai.

Shai and his team plan to return to the site in 2015, when they will expand the excavated areas to uncover more of the Late Bronze public building, the Iron Age fortifications, agricultural installations, and Late Bronze Age burial caves.

Readers may learn more about Tel Burna and how to participate and support the excavations by going to the project website. A detailed article by Dr. Shai about the Tel Burna excavations will be published in the Spring 2015 issue of Popular Archaeology Magazine.