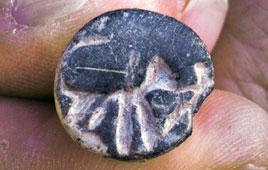 A small stone seal found recently in excavations of Tel Beit Shemesh, which could be the first archaeological evidence of the story of the biblical Samson.

Israel is known for its rich culture and history with archeologists' constantly unearthing artifacts of biblical proportions. The latest finding was a small stone seal found recently in excavations of Tel Beit Shemesh, which could be the first archaeological evidence of the story of the biblical Samson.

The seal, measuring 1.5 centimeters, depicts a large animal next to a human figure. The seal was found in a level of excavation that dates to the 11th century B.C.E. That was prior to the establishment of the Judean kingdom and is considered to be the period of the biblical judges - including Samson. Scholars say the scene shown on the artifact recalls the story in Judges of Samson fighting a lion.

But excavation directors Prof. Shlomo Bunimovitz and Dr. Zvi Lederman of Tel Aviv University say they do not suggest that the human figure on the seal is the biblical Samson. Rather, the geographical proximity to the area where Samson lived, and the time period of the seal, show that a story was being told at the time of a hero who fought a lion, and that the story eventually found its way into the biblical text and onto the seal.

Not far from Beit Shemesh is Tel Batash, which is the biblical Timna, where Samson's wife lived. As the Bible tells it, Samson was on his way to his engagement party when "a young lion roared against him." (Judges 14:5 ) 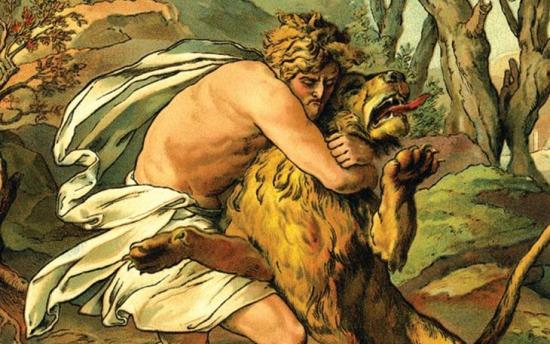