18 ft. high fortifications dating back to the 8th century BCE were discovered in the harbor of the ancient Philistine city. 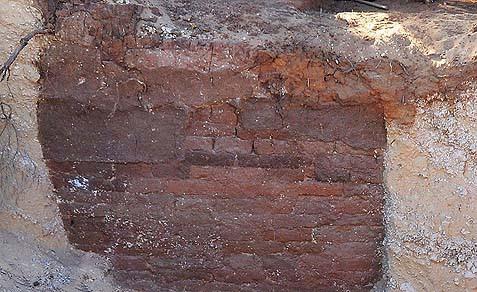 An archeological team headed by Dr. Alexander Fantalkin of Tel Aviv university has announced the discovery of one of the largest construction projects in the entire Mediterranean basin: a system of fortifications from the 8th century BCE, as well as coins, weights and parts of buildings from the Hellenistic period, have all been found in the archeological dig Tel Ashdod Yam – where the harbor of the philistine city of Ashdod used to be. The site is about 3 miles south of today’s thriving Israeli city of Ashdod.

This has been the first deep and well organized dig at the site, following the only previous dig there, carried out by the late archeologist Dr. Ya’akov Caplan in 1965-68.

The more recent dig has brought to light the remains of an 8th century BCE fortification system – a mud brick wall comprised of internal and external dykes circling a wharf. The dig has also unearthed ruins of buildings from the Hellenistic period (late 4th to early 2nd centuries BCE), as well as coins and weights.

“We knew there was an important archeological site there that hasn’t been dug until now,” Dr. Fantalkin told Walla. “We concluded the pioneer year of this project, and it’s being planned for many years to come. This is the ancient harbor of the Philistine city of Ashdod, We found there a very impressive fortification system comprised of 18 ft. tall mud brick walls. This brick wall is the core of a system of dykes that are combined into a huge, horseshoe shaped fortification, protecting a man-made pier.”

Dr. Fantalkin said his team was surprised by the degree of preservation of these structures, from some 2,750 years ago. They’re only now beginning to come to terms with the magnitude of what they’ve discovered.

An Assyrian governor ruled the southern Mediterranean basin in a time that was mired in power struggles and wars. Assyrian texts do describe a Philistine rebellion against Assyrian rule at the end of that period. Dr. Fantalkin believes the fortifications he discovered are related, one way or another, to the events on record.

Following the Philistine rebellion, the Assyrians sent down an army in 712 BCE, and the rebelling king fled to Egypt,” he continued. “The Assyrians demanded the Egyption extradite him, which they did. The entire affair is mentioned both in the Bible and in Assyrian sources. (For Gaza will be abandoned And Ashkelon a desolation; Ashdod will be driven out at noon And Ekron will be uprooted. Zephaniah 2:4) The rebellion was put down forcefully by the Assyrians and the city of Ashdod was destroyed.”