The back of 'Ostracon 16' bears orders to Elyashiv, the Judahite quartermaster at Tel Arad 2,600 years ago, from his friend Hananyahu 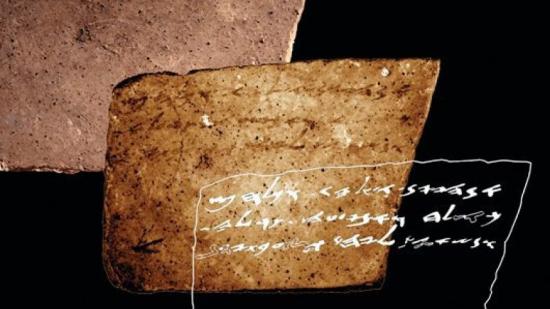 The newly discovered inscription on the back of Ostracon 16. Michael Cordonsky/Tel Aviv University
The “Elyashiv Ostracon” – an extremely rare bit of pottery bearing even rarer writing from the First Temple era – turns out to have more writing on its back side, scientists have announced following a serendipitous discovery.
The researchers deciphered 50 letters in 17 words on the ostracon’s rear.
Until now, they had thought the back of the sherd, also known as Ostracon 16 and kept at the Israel Museum for the last 50 years, was blank. Then, the team photographer, Michael, took an advanced-technology picture of that rear side, thinking he might be seeing something there, explains Tel Aviv University team member Dr. Barak Sober – and there was.
Fresh analysis of Ostracon 16 found four previously unknown lines on its front – where the writing is fairly clear after around 2,600 years – and three on its back.
The writing on the rear seems to simply be a continuation of a letter from Hananyahu to his friend, a Judahite quartermaster named Elyashiv Ben Oshiyahu quartered at the Arad Fortress, asking for an issue of wine and food from the reserves at the Arad fortress for one of the army units, says team member Dr. Arie Shaus.
The pottery bit also mentions a messenger by the name of Ga’alyahu, who was sent to Arad with the wine delivery.
The ancient Judahite citadel uncovered at Tel Arad in the inland Negev, 10 kilometers (6.2 miles) from the modern city of Arad, provided a wealth of artifacts from the kingdom’s late days.
Among the things found there about 50 years ago were 91 ostraca – fragments of pottery with ink writing on them, in paleo-Hebrew.
Of these ostraca, over a dozen were orders to the Judahite quartermaster Elyashiv, says Sober. It is the reanalysis of one of these that caused the sensation this week.
Letter from a friend
The ostraca aren’t biblical or poetical writings; they are orders to the quartermaster, commands, lists of names, and so on.
“All the ostraca in the ‘Elyashiv archive’ were found in the same room on the floor,” says Sober. “All were addressed to Elyashiv, starting ‘To Elyashiv’ – deliver this or that amount of wine or flour, and so on. One ostracon doesn’t address him but mentions him.”
Actually, even before writing was noticed on its back, the Elyashiv Ostraca was an anomaly. The other ostraca are orders, pure and simple. This one looks like a personal letter from his good friend Hananyahu (or possibly peer quartermaster, former school buddy, who knows?), says Sober.
“We don’t know how many of the ostraca Hananyahu wrote. Most of the letters to Elyashiv look like orders, but this was different,” says Sober. For one, it didn’t read like military barking, he explains. “It uses a phrase that could mean ‘Your friend,’ ‘Dear friend,’ maybe even ‘Beloved.’ Clearly, this is not an order, it’s something personal.”
The mysterious Hananyahu may well have lived in Be’er Sheva, another Judahite regional hub, says Shaus.
Another conclusion from the collection of ostraca is that literacy was widespread among the rank and file of the Judahites in the First Temple era. That had not been assumed until recently, but the writings discovered were not scribes carving tablets to appease kingly egos, but soldiers corresponding with each other. Sober, for one, says he feels the argument over literacy at the time is over.

The archaeological site at Tel Arad, southern Israel. Eliyahu Hershkovitz
An era ends
Who controlled the Judahite fortress at Tel Arad at the time, around 600 B.C.E., is not known, nor who was king of Judah.
There has been some argument over dating the finds at the site, say Shaus and Sober. The fortress itself must date from before the destruction of the First Temple in 586 B.C.E., but that was a time of turmoil in the region, not least among the Judahite elite. The Judahite monarchs were churning rapidly, some lasting only three months, says Shaus. In short, we have no clue who ruled the roost.
We do have a clue that the Judahites were bracing for a clash with the hated Edomites. “What we can say is that it was a period of tensions with Edom,” says Sober. “The other ostraca indicate an approaching battle with Edom – one of the writings speaks of calling for reinforcements of so many soldiers from here and so many soldiers from there to the Negev plateau. They were probably preparing for approaching Edomites.”
The applied mathematics researchers, Shira Faigenbaum-Golovin, Shaus and Sober, along with Dr. Anat Mendel-Geberovich of the archaeology department, cannot say which king built the fortress, either. They can postulate that it protected the Judean kingdom’s southern border and was manned by up to 30 soldiers, says Mendel-Geberovich.
Artifacts in general, and writing in particular, from the First Temple era are very rare, and one of the Tel Arad ostraca previously made waves: the so-called “House of Yahweh” sherd, also dating from the sixth century B.C.E. That is something of a laundry list as well, having been translated as follows:
“To my lord Elyashiv, May YHWH inquire after your well-being.” It then goes on to say, “And now, give to Shemaryahu a measure (of flour), and to the Kerosite you will give a measure (of flour). And concerning the matter about which you commanded me, it is well. He is staying in the house of YHWH.”
Ultimately, the fortress at ancient Arad was abandoned. Shaus and Sober acknowledge that they don’t know why, and laugh: “Maybe the Edomites showed up.”