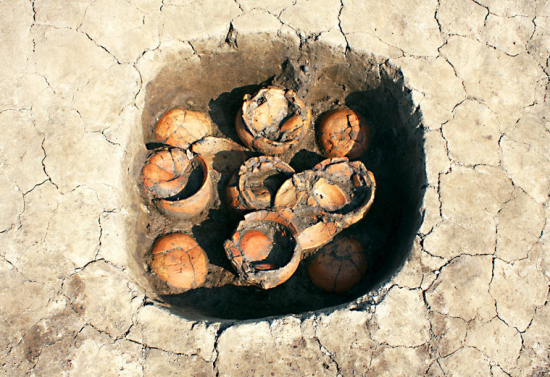 Five earthen containers arranged in a cross shape and four plates positioned at the corners of a hole discovered at the Tehara ruins in Ritto, Shiga Prefecture (Provided by Ritto city board of education)

Five coin-filled pots believed to have been used in an ancient Buddhist ritual to purify a building site have been unearthed at the Tehara ruins here.

The peculiar arrangement of the pots in a cross shape, with points facing north, south, east and west, suggests they were part of an esoteric rite in the Buddhist tradition, according to the Ritto city board of education.

"In Buddhist site-purification rituals, noxious vapors are purged by placing Buddhist images at nine points around a square, including the center," said Masayoshi Mizuno, an archaeologist and director of the Gangoji temple institute for research on cultural property. "This indicates there used to be an important building there."

The find is believed to be the first of its kind in Japan.

The jars, complete with lids, were found inside a hole 28 centimeters deep and 70 cm across in an open area at the ruins of a building that is believed to have served as a public office or private house for a local leader.

"Hajiki" clay plates 3 cm high and 13 cm in diameter were also found at the four corners of the hole.

"The pots that contain offerings appear to have been deliberately positioned in a central location and the four points of the compass," said Towao Sakaehara, director at the Osaka Museum of History and an expert in Japanese ancient history. "They seem to have been treated with great care.”

"They were likely buried in the hope of prosperity for the building owners and others, given that ancient coins bearing such words as ‘tomi’ (wealth) and ‘kotobuki’ (congratulations), as well as a peach seed believed to clear away bad vapors and bring perpetual youth and longevity, are encased," he added.

Pottery filled with "Wadokaichin" and "Jingukaiho" coins were also discovered around the hole. The ages of the clay pots and other factors suggest the site-purification ceremony continued for dozens of years, archaeologists said.