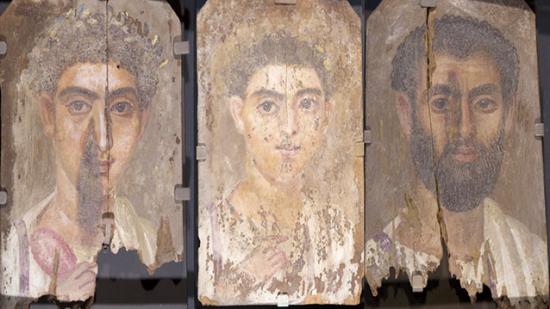 Roman-era Egyptian mummy portraits from the site of Tebtunis, Egypt, are shown in visible light, with no blue color apparent to the naked eye. In an unexpected discovery, a research team of scientists and art conservators has found the synthetic pigment Egyptian blue present in all three paintings. (Credit: Phoebe A. Hearst Museum of Anthropology, University of California, Berkeley)

Mostly untouched for 100 years, 15 Roman-era Egyptian mummy portraits and panel paintings were literally dusted off by scientists and art conservators from Northwestern University and the Phoebe A. Hearst Museum of Anthropology as they set out to investigate the materials the painters used nearly 2,000 years ago.

What the researchers discovered surprised them, because it was hidden from the naked eye: the ancient artists used the pigment Egyptian blue as material for underdrawings and for modulating color -- a finding never before documented. Because blue has to be manufactured, it typically is reserved for very prominent uses, not hidden under other colors.

“This defies our expectations for how Egyptian blue would be used,” said Marc Walton, research associate professor of materials science and engineering at Northwestern and an expert on the color blue. “The discovery changes our understanding of how this particular pigment was used by artists in the second century A.D. I suspect we will start to find unusual uses of this colorant in a lot of different works of art, such as wall paintings and sculpture.”

The best Roman-era painters tried to emulate Greek painters, who were considered the masters of the art form. Before the Greek period, Egyptian blue was used everywhere throughout the Mediterranean -- in frescoes, on temples, to depict the night sky, as decoration. But when the Greeks came along, their palette relied almost exclusively on yellow, white, black and red.

“When you look at the Tebtunis portraits we studied, that’s all you see, those four colors,” Walton said. “But when we started doing our analysis, all of a sudden we started to see strange occurrences of this blue pigment, which luminesces. We concluded that although the painters were trying hard not to show they were using this color, they were definitely using blue.”

The study was published this month by Applied Physics A, a journal focused on materials science and processing. The research collaboration is part of the Northwestern University-Art Institute of Chicago Center for Scientific Studies in the Arts (NU-ACCESS), for which Walton is a senior scientist.

“Our findings confirm the distinction between the visual and physical natures of artifacts -- expect the unexpected when you begin to analyze an artwork,” said Jane L. Williams, a conservator at the Hearst Museum and a co-author, along with Walton, of the study. “We see how these artists manipulated a small palette of pigments, including this unusual use of Egyptian blue, to create a much broader spectrum of hues.”

The researchers studied 11 mummy portraits and four panel painting fragments. The 15 paintings were excavated between December 1899 and April 1900 at the site of Tebtunis (now Umm el-Breigat) in the Fayum region of Egypt. They now are housed in the collections of the Hearst Museum at the University of California, Berkeley.

The fragile mummy portraits are extremely lifelike paintings of specific deceased individuals. Each portrait would be incorporated into the mummy wrappings and placed directly over the person’s face, Williams explained.

While working on the conservation treatment of these paintings, Williams had many unanswered questions about their materials and techniques, but without a conservation science division at the Hearst Museum, she had limited means to investigate. Working with NU-ACCESS made a comprehensive technical survey of the paintings possible, Williams said.

Walton and his Northwestern team brought expertise in scientific analysis of cultural heritage materials and some of the latest technology for the non-destructive analysis of artworks to the Hearst Museum. The study quickly revealed some surprises.

The researchers uncovered the unexpected uses of Egyptian blue -- the first man-made pigment, inspired by lapis lazuli, the true blue -- using a routine battery of different analytical techniques, such as X-ray fluorescence and X-ray diffraction. Six of the 15 paintings have the unusual use of blue, the researchers found.

The skilled painters employed blue for underdrawings, to modulate clothes, the shading on clothing and in other not necessarily intuitive uses of Egyptian blue, a pigment used for millennia before these paintings were made.

“We are speculating that the blue has a shiny quality to it, that it glistens a little when the light hits the pigment in certain ways,” Walton said. “The artists could be exploiting these other properties of the blue color that might not necessarily be intuitive to us at first glance.”

Research on these paintings, which is ongoing, will contribute to the international collaborative study project Ancient Panel Paintings: Examination, Analysis and Research (APPEAR), initiated by the J. Paul Getty Museum. APPEAR aims to create an international digital database to compile historic, technical and scientific information on Roman Egyptian portraits.

“Our collaboration with NU-ACCESS makes it possible for the Hearst Museum to contribute to this project at the level of much larger museums, like the Getty or the British Museum, that have conservation science divisions,” Williams said.

The paper is titled “Investigating the use of Egyptian blue in Roman Egyptian portraits and panels from Tebtunis, Egypt.” In addition to Walton and Williams, other authors of the paper are Monica Ganio (first author), Johanna Salvant and Oliver Cossairt, of Northwestern; and Lynn Lee, of the Getty Conservation Institute.

NU-ACCESS is based at Northwestern’s McCormick School of Engineering and Applied Science and is supported by a grant from the Andrew W. Mellon Foundation. The center’s mission is to provide scientific support for the investigation of art collections, as well as to develop new technology to look at art.