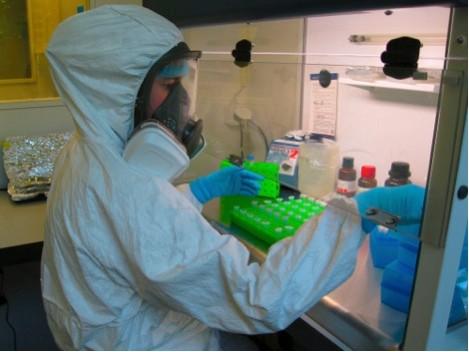 When a University of Oklahoma researcher and an international team of experts analyzed the dental calculus or plaque from teeth preserved for 1,000 years, the results revealed human health and dietary information never seen before.  The team discovered disease-causing bacteria in a German Medieval population, which is the same or very similar to inflammatory disease-causing bacteria in humans today—unlikely scientific results given modern hygiene and dental health practices.

Christina Warinner, research associate in the Molecular Anthropologies Laboratories, OU College of Arts and Sciences, assembled an international team of experts using the most cutting-edge technology available to build a detailed picture of people from the Medieval period by extracting DNA from samples of the dental calculus. The samples were small, but dental calculus has a thousand times more DNA than bone.  Warinner and her team also looked at and analyzed the protein in the samples for an even more detailed look.

“Through protein sequencing, we can reconstruct infection and immune processes. It is like excavating a battlefield archaeological site, just at a molecular scale,” says Enrico Cappellini, a senior researcher from the University of Copenhagen in Denmark.

“What makes dental calculus so unique,” according to Warinner, “is that it acts both as a long-term reservoir of the oral microbiome and as a trap for dietary and environmental debris. This allows us to investigate health and disease, as well as reconstruct aspects of an individual’s life history and activities. Never before have we been able to retrieve so much information from one small sample.”

Matthew Collins, a researcher from the University of York in the United Kingdom, says, “The preservation of biomolecules in dental calculus is remarkable — a microbial Pompeii.” He added, “As we learn more about the evolution of the oral microbiome, I can imagine a future in which most archaeologists regard calculus as more interesting than the teeth themselves.”

Warinner’s research was initially considered high-risk because no one knew what, if anything, would be preserved in dental calculus. The results were significant and have contributed valuable information on the long-term relationship between humans and their resident microbes. “The study of ancient microbiomes helps us understand the evolutionary history of human health and disease," says Frank Rühli, director of the Centre for Evolutionary Medicine at the University of Zürich. “It informs modern medicine.”

A journal article on this research was published in the February 23, 2014, issue of Nature Genetics and is available at www.nature.com/ng.