Tazovsky (Russie) : Grave of blond-haired 'infant prince' from the 15th century found in the Arctic

The burials were on the highest points of the spurs, or hillocks, on Arctic rivers. Picture here and below: Alexander Tkachev

These unique burials, not part of ancient necropolises nor close to each other, were each at the pinnacle of raised spurs beside rivers on the remote Tazovsky peninsula.

So far nine burials have been found, but only two opened - and more may be identified.

The latest to be unearthed during an archeological expedition this summer revealed the remains of a child aged between three and seven dating to the late 15th or early 16th centuries, sent to the next life with a meal of newly roasted venison in his grave.

The latest to be unearthed during an archeological expedition this summer revealed the remains of a child aged between three and seven.

One year ago, a boy aged 13 or 14 was found with cross-shaped inlays of white bronze on his funeral gown, it was disclosed. Archeologists suspect the others will be children too, but admit they could be wrong.

One theory, still to be fully tested, is that the youngsters were buried alone, away from their clans, because they died before being fully initiated into their polar societies.

There are known burial sites for this time of the indigenous Sikhirtya (Siirtya) people - small, with fair hair and light eyes - called Num-khibya-sikheri I and Num-khibya-sikheri V. The local Nenets call the location 'The Road of Those Who Went To Heaven'. 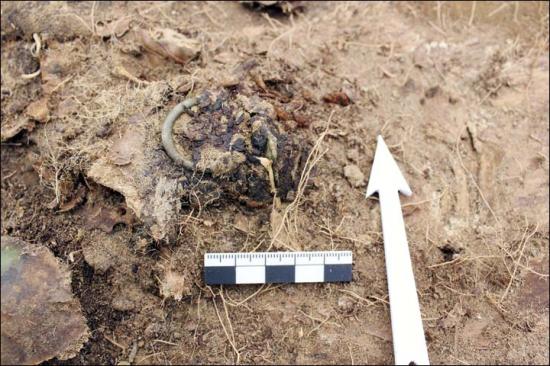 When we noticed the pieces of fur and woollen cloth along with the decorations - and understood it was impressive headwear - we were really shocked.'

'This was a child, presumably about three or four years old years, but could be up to seven.

'The child was lying on an underlay of birch bark. There were two iron knives in the area of the belt, an arrowhead, and reindeer bones under the feet.

'The headwear had bronze decorations sewn into it.

He explained: 'The burial was unusually rich for such a little child. In fact, we were rather taken aback.

'When we dug down, we thought the grave was almost empty, but then we saw two knives and were very surprised.

'When we noticed the pieces of fur and woollen cloth along with the decorations - and understood it was impressive headwear - we were really shocked.

'We did not expect such a rich child's burial in this place. We took all the ground around the head gear in one piece... not wanting to lose anything. Now, we will work on this in the lab.'

The headdress was 'two layered' - on the outside fur, but lined with a woollen fabric.

Ornaments were sewn into the elaborate headgear. There were decorative ornaments as well as rings.

The burials were on the highest points of the spurs, or hillocks, on Arctic rivers. They were shallow, up to 15 centimetres in depth.

The body lay on a birch bark underlay, the pieces sewn together. A small moat was dug around the burial place. /

Evidence was found of fires on mounds at the graves, with venison being cooked on the bone, perhaps as sustenance on the way to the next life. A construction of wood or branches was set alight.

'We found the traces of fire, embers and ash,' he said.

Some burials are 100 metres apart, others separated by a distance of kilometres.

Dr Tkachev said the dead may have been 'significant members of their society, but died before some initiation rite'. This would explain why 'they were buried separately'.

He said: 'If we will find adults in similar burials, I will need to reconsider this theory.'

The burials are from the indigenous Sikhirtya (Siirtya) people. They had arrived from the south some 2,800 years ago.

Nenets people described them as 'very small, with blonde hair and light eyes'. They hunted and fished but also traded with Russians.

By the mid 17th century they had become assimilated with the Nenets people.

The new finds were made by Dr Tkachev, archeologist Andrey Slushaev, from Yekaterinburg, and student Katya Gyurdzhoyan.

They plan to reconstruct the dead child's elaborate headdress.