Archaeologists leading the University of Toronto's Tayinat Archaeological Project in southeastern Turkey have unearthed the remains of a monumental gate complex adorned with stone sculptures, including a magnificently carved lion. The gate complex provided access to the citadel of Kunulua, capital of the Neo-Hittite Kingdom of Patina (ca. 950-725 BCE), and is reminiscent of the citadel gate excavated by British archaeologist Sir Leonard Woolley in 1911 at the royal Hittite city of Carchemish.

The Tayinat find provides valuable new insight into the innovative character and cultural sophistication of the diminutive Iron Age states that emerged in the eastern Mediterranean following the collapse of the great civilized powers of the Bronze Age at the end of second millennium BCE.

"The lion is fully intact, approximately 1.3 metres in height and 1.6 metres in length. It is poised in a seated position, with ears back, claws extended and roaring," says Timothy Harrison, professor of near eastern archaeology in the Department of Near and Middle Eastern Civilizations and director of U of T's Tayinat Archaeological Project (TAP). "A second piece found nearby depicts a human figure flanked by lions, which is an iconic Near Eastern cultural motif known as the Master and Animals. It symbolizes the imposition of civilized order over the chaotic forces of the natural world." 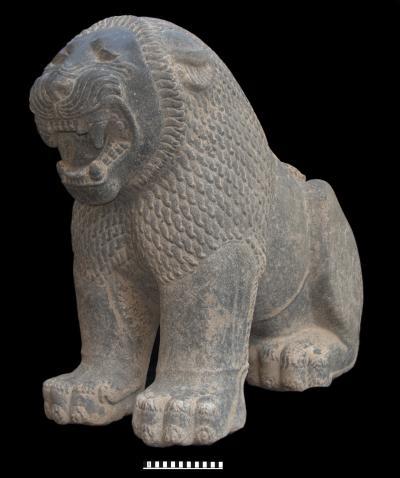 "The presence of lions, or sphinxes, and colossal statues astride the Master and Animals motif in the citadel gateways of the Neo-Hittite royal cities of Iron Age Syro-Anatolia continued a Bronze Age Hittite tradition that accentuated their symbolic role as boundary zones, and the role of the king as the divinely appointed guardian, or gatekeeper, of the community," says Harrison. The elaborately decorated gateways served as dynastic parades, legitimizing the power of the ruling elite.

The gate complex appears to have been destroyed following the Assyrian conquest of the site in 738 BCE, when the area was paved over and converted into the central courtyard of an Assyrian sacred precinct.

"The stylistic features of the lion closely resemble those of a double-lion column base found in the 1930s in the entrance to one of the temples that formed the Assyrian sacred precinct," says Harrison. "Whether reused or carved during the Assyrian occupation of the site, these later lion figures clearly belonged to a local Neo-Hittite sculptural tradition that predated the arrival of the Assyrians, and were not the product of Assyrian cultural influence as scholars have long assumed."

TAP is an international project, involving researchers from a dozen countries, and more than 20 universities and research institutes. It operates in close collaboration with the Ministry of Culture of Turkey, and provides research opportunities and training for both graduate and undergraduate students. The project is funded by the Social Sciences and Humanities Research Council of Canada and the Institute for Aegean Prehistory (INSTAP), and receives support from the University of Toronto.