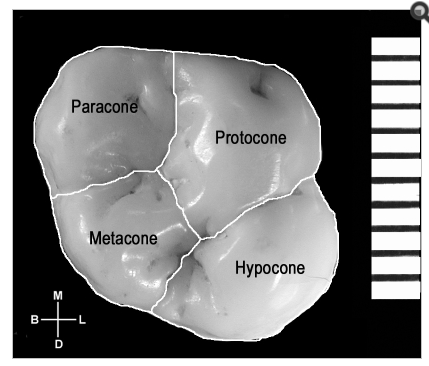 Occlusal photograph of the Krapina D171 M1 with the cusps outlined to illustrate the measurement methodology.

A significant number of Middle to Late Pleistocene sites contain primarily (and sometimes only) deciduous teeth (e.g., Grotta del Cavallo, Mezmaiskaya, Blombos). Not surprisingly, there has been a recent renewed interest in deciduous dental variation, especially in the context of distinguishing Homo neanderthalensis andHomo sapiens. Most studies of the deciduous dentition of fossil hominins have focused on standard metrical variation but morphological (non-metric and morphometric) variation also promises to shed light on long standing taxonomic questions. This study examines the taxonomic significance of the crown outline of the deciduous upper second molar through principal components analysis and linear discriminant analysis. We examine whether or not the crown shape of the upper deciduous second molar separatesH. neanderthalensis from H. sapiens and explore whether it can be used to correctly assign individuals to taxa. It builds on previous studies by focusing on crown rather than cervical outline and by including a large sample of geographically diverse recent human populations. Our samples include 17 H. neanderthalensis, five early H. sapiens, and 12 Upper Paleolithic H. sapiens. In addition, we include two Homo erectusspecimens in order to evaluate the polarity of crown shape differences observed betweenH. neanderthalensis and H. sapiens. Our results show that crown outline shape discriminates H. sapiens andH. neanderthalensis quite well, but does not do well at distinguishing H. erectus from H. sapiens. We conclude that the crown outline shape observed in H. sapiens is a primitive retention and that the skewed shape observed in H. neanderthalensis is a derived condition. Finally, we explore the phylogenetic implications of the results for the H. erectus molars.