Historic remains of one of Tauranga City's earliest buildings – a bakery dating back to the 1870s – has been unearthed at Masonic Park on The Strand.

Heritage New Zealand Pouhere Taonga were called in to investigate after contractors working on the renovation project, next to The Pheonix, discovered historic artefacts on May 9. 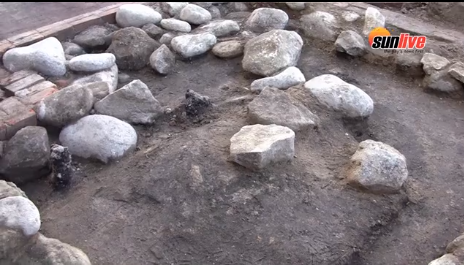 Tauranga City Council says for the last week archaeologists have been excavating the remains of the 1870s bakery and have discovered brick foundations of the large baking ovens.

The early cooking ovens are from two different time periods with one dating back to the early 1870s, or possibly earlier, and a later one that has not yet been accurately dated.

The bakery had a shop frontage on The Strand and was still operating in the World War II.

The Masonic Park site was historically home to the Masonic Hotel from 1865 until it was demolished in 1993, with council deciding the site was to become an open space reserve in 2010.

“It is rare to find such a well-preserved bakery from this time period anywhere in New Zealand. The only other examples we have are from the goldfields of Central Otago and one site in Dunedin,” says Rachel.

“It is exciting to find that part of the early township still survives to tell us more about our past.”

The renovation project was scheduled to be completed by end of June before the historical find halted work.

Instead while archaeologists are on site, project contractors are moving on to the next stage of the project, creating a new rail crossing opposite Masonic Park.

Renovation work at the park will resume around the archaeology site from next week.

In the meantime council and Heritage New Zealand are considering how best to preserve the find. Options and possible funding ideas will be presented to the city councillors next month for direction.

Some private sector companies have already expressed interest in assisting with funding.

The site is currently closed to the public. Heritage New Zealand and Council propose to host a public open day to talk about the history found there.