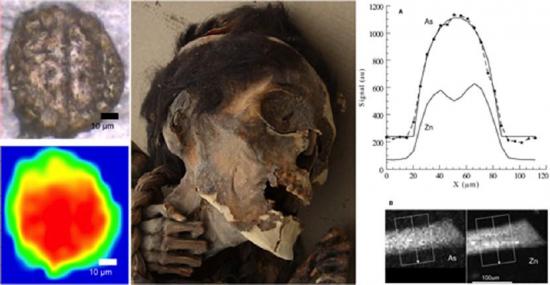 Water contaminated by arsenic afflicted and often killed people in ancient Inca and Chinchorro civilisations in northern Chile, a study has shown.

Scientists using a range of high-tech methods to analyse hair samples from a 1,000-1,500-year-old mummy from the Tarapacá Valley in Chile's Atacama Desert found a high concentration of arsenic in the mummy's hair come from drinking arsenic-laced water and eating contaminated plants.

Although previous analysis of hair samples from pre-Columbian era mummies that lived in Chile's Atacama desert showed evidence of arsenic poisoning, the methods did not reveal how the poison got into the hair.

Ioanna Kakoulli, an archaeologist at the University of California, Los Angeles, told Live Science: "They didn't map where the arsenic is precipitated on the hair -- they just took it and dissolved it."

This information does not reveal if the arsenic wound up in the hair externally, or if it was ingested and traveled through the bloodstream first.

Yet it is likely the arsenic-rich sediments came from copper-mining activities in the highlands. "When it rains, the arsenic can leach out into the rivers," Kakoulli added.

To find out more about the poisoning of the ancient people from northern Chile, the team examined a naturally preserved mummy that was buried in the TR40-A cemetery in Tarapacá Valley.

Using non-invasive techniques such as analysis of the skin, hair and clothes, as well as the surrounding soil, the researchers discovered skin conditions indicative of arsenic poisoning.

It was also revealed that the dominant form of arsenic in the hair was a type called arsenic III, whereas the inorganic arsenic in surface water and groundwater is mainly arsenic V. Studies have suggested that the body "biotransforms" ingested arsenic into arsenic III.

"The results are consistent with modern epidemiological studies of arsenic poisoning by ingestion," Kakoulli said, adding that the technological approach used in the study could prove useful to forensic investigations and toxicity assessments in archaeology.

The same method of testing will be used to see if ancient civilisations in the Tarapacá Valley used certain hallucinogens, as some individuals were buried with exotic Amazonian seeds and various hallucinogenic paraphernalia.

The study was published in the journal Analytical Chemistry.