What is war good for? Sparking civilization, suggest UCLA archaeology findings from Peru

Warfare, triggered by political conflict between the fifth century B.C. and the first century A.D., likely shaped the development of the first settlement that would classify as a civilization in the Titicaca basin of southern Peru, a new UCLA study suggests.

Charles Stanish, director of UCLA's Cotsen Institute of Archaeology, and Abigail Levine, a UCLA graduate student in anthropology, used archaeological evidence from the basin, home to a number of thriving and complex early societies during the first millennium B.C., to trace the evolution of two larger, dominant states in the region: Taraco, along the Ramis River, and Pukara, in the grassland pampas.

"This study is part of a larger, worldwide comparative research effort to define the factors that gave rise to the first societies that developed public buildings, widespread religions and regional political systems — or basically characteristics associated with ancient states or what is colloquially known as 'civilization,'" said Stanish, who is also a professor of anthropology at UCLA. "War, regional trade and specialized labor are the three factors that keep coming up as predecessors to civilization."

The findings appear online in the latest edition of Proceedings of the National Academy of Sciences.

Conducted between 2004 and 2006, the authors' excavations in Taraco unearthed signs of a massive fire that raged sometime during the first century A.D., reducing much of the state to ash and architectural rubble. The authors compared artifacts dating from before and after the fire and concluded that agriculture, pottery and the obsidian industry, all of which had flourished in the state, greatly declined after the fire.

Based on the range and extent of the destruction and the lack of evidence supporting reconstruction efforts, the authors suggest that the fire was a result of war, not of an accident or a ritual.

Iconographic evidence of conflict in regional stone-work, textiles and pottery suggests that the destruction of Taraco had been preceded by several centuries of raids. This includes depictions of trophy heads and people dressed in feline pelts cutting off heads, among other evidence.

Because the downfall of Taraco, which was home to roughly 5,000 people, coincided with the rise of neighboring Pukara as a dominant political force in the region, the authors suggest that warfare between the states may have led to the raids, shaping the early political landscape of the northern Titicaca basin.

Inhabited between 500 B.C. and 200 A.D., Pukara was the first regional population center in the Andes highlands. During its peak, it covered more than 2 square kilometer and housed approximately 10,000 residents, including bureaucrats, priests, artisans, farmers, herders and possibly warriors.

The civilization's ruins include impressive monolithic sculptures with a variety of geometric, zoomorphic and anthropomorphic images, plus intricate, multi-colored pottery in a variety of ritual and domestic forms.

War appears to have played a similar civilizing role in Mesoamerica, as well as Mesopotamia, Stanish said. To further test his theories on the origins of civilization, Stanish will begin a new project next year at a Neolithic site in Armenia. 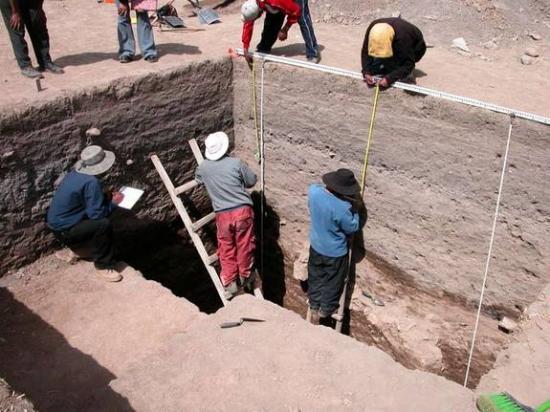 An excavation of two ancient Peruvian sites suggests the people of Pukara set fire to and waged war on the established ancient state of Taraco more than 2,000 years ago. - CREDIT: Charles Stanish. 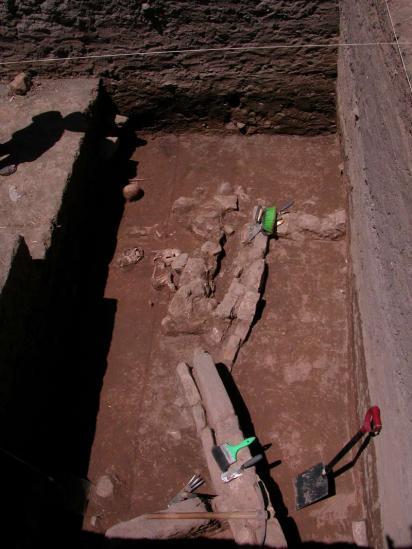 This excavation reveals two building periods in Peru, with evidence of burning found at the higher level, at a site called Taraco. - CREDIT: Charles Stanish.