Taposiris Magna (Egypte): Cleopatra's tomb may have been found 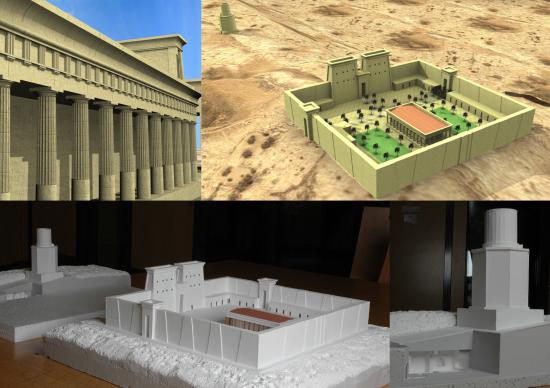 Egypt's top archaeologist has made his version of a sales pitch, presenting 22 coins, 10 mummies, and a fragment of a mask with a cleft chin as evidence that the discovery of the lost tomb of Mark Antony and Cleopatra is at hand.

Zahi Hawass showed off the ancient treasures to journalists on Sunday during a tour of a 2,000-year-old temple to the god Osiris, where they were found. He believes the site near the Mediterranean Sea contains the tomb of the doomed lovers that has been shrouded in mystery for so long.

"In my opinion, if this tomb is found, it will be one of the most important discoveries of the 21st century because of the love between Cleopatra and Mark Antony, and because of the sad story of their death," he said.

The lovers challenged Caesar Augustus for control of the Roman Empire more than two millennia ago. Their armies were defeated and rather than submit to capture, they committed suicide - Mark Antony by his sword, Cleopatra with a poisonous asp.

The Roman historian Plutarch said Caesar allowed the two to be buried together, but their tomb was never found.

Hawass' claim is the latest spectacular announcement by the archaeologist, who continues to capitalise on the world's fascination with ancient Egypt. He regularly unveils discoveries that are often met with scepticism and bemusement by Egyptologists abroad.

In the past, archaeologists have not always backed Hawass' more enthusiastic claims and suggested a degree of caution is sometimes warranted.

With his trademark Indiana Jones-style hat, Hawass guided journalists through the Taposiris Magna temple 50km from Egypt's ancient seaside capital of Alexandria. One by one, he held up the fruits of three years of excavation by a team from the Dominican Republic, including the fragment of a mask bearing a distinctive cleft chin.

"If you look at the face of Mark Antony, many believed he had this cleft on his chin and that's why I thought this could be Mark Antony," said Hawass.

But he admitted they "are not sure 100 per cent" and joked that the mask could depict Richard Burton, the actor who played Mark Antony in the 1963 movie, Cleopatra, also starring Elizabeth Taylor.

Kathleen Martinez, the Dominican archaeologist who has been excavating the site for the past three years, said she chose the temple based on 12 years of studying the life of Cleopatra.

"I believe it could be Taposiris Magna because it was the most sacred temple of its time," she said, explaining that the lovers were buried in a temple rather than a public tomb to protect them from the Romans.

Inside the temple enclosure, Martinez's team also found coins bearing Cleopatra's name and face, as well as the carvings that could represent the doomed lovers.

For Hawass, however, the most significant element was the recent discovery of tombs from the same time period ringing the area around the temple. The tombs included 10 mummies of apparent nobles.

"The discovery of the cemetery this week really convinced me that there is someone important buried inside this temple," he said to television cameras while standing inside a rough cut tomb surrounded by niches filled with bones and whole skeletons.

"No one would be buried outside a temple without a reason. We saw that in the pharaonic days; they were always buried beside pyramids," he said.

The discovery of the cemetery prompted Hawass to conduct a study of the temple with ground-penetrating radar, which revealed three possible sites for subterranean burial chambers 12 metres underground.

Excavations will start on Tuesday, said Hawass, who predicted the mystery of the resting place for the two would finally be solved. A second radar study is set for April 22.