In order to fit the infrastructure, excavations were constantly conducted by Anhui provincial institute of archaeology and cultural relic together with cultural departments in Ma’anshan city and Dangtu county. Taozhuang site, situated in Ma’anshan City, was excavated from 10th, July, 2011 till 20th September, 2011. As a result, an area, a total of 800 square meter, have been eventually explored. Of a series of significant archaeological achievements, a mound tomb was impressive, as for ceramics, proto-porcelains, and other cherish cultural relics up to forty were unearthed in the tomb.

Taozhuang mound tomb, dating to the Warring States, was 200 meters proximity to Taozhuang village, Xinshi town, Dangtu county. The mound tomb, set in an earth shallow pit, was partly destroyed, preserved with its main mound ca. 1 meter high. The bottom of the grave may have been oval, with its longer diameter 23 meter, shorter one 18 meter. Oriented east to west, the tomb measured 6.7 meter long, 3.5 meter wide and 0.55 meter deep. The evidence of remained ashes of wooden slabs may suggest that coffin chamber would have been 5.1 meter long and 2.5 meter wide. The chamber seems to have been divided into two sub-chambers, to the east and to the west. There were several human teeth and bones remained in the middle and to the north of the eastern chamber, and in the northeastern part of the western chamber. It is to be noticed that four limb bones were distributed in the northeastern part of the western chamber, from the east to west, every two a group. An irregular, oval earth pit, with the soil grey and brownish, was found out of the eastern burial chamber. The pit measured 1.6 meter in longer diameter, and 0.9 meter in shorter diameter, and 0.16 meter in depth. Within the pit lay well-preserved femur bones, indicating the orientation of the death: to the north. The evidence of these remained bones and teeth may suggest that the burial would have been a communal tomb. Otherwise, the earth pit out of the burial chamber may have had the purpose of sacrifice. 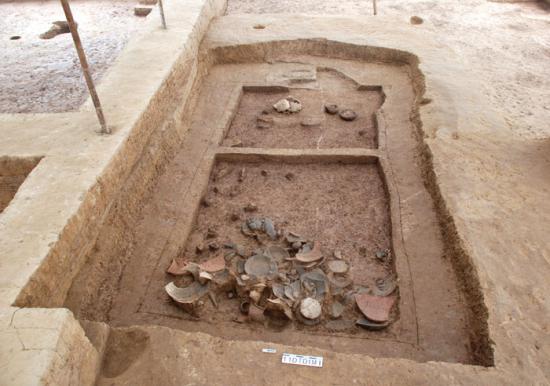 Funerary inventories include two categories: pottery manufactured for the purpose of burial, i.e., ritual ceramics and imitating bronze, such as ding tripod, tripod plate, washbasin with a tubular handle, angular vessel, and etc. There were ceramics connected with domestic function as the other category, including pottery, impressed ware and proto-porcelain. It should be notice of a variety of pottery forms, such as pottery fu vessel, steamer, bowls, and spinning wheels. Impressed wares have jars, and urns. Small bu vase, cup and goblet are part of proto-porcelains. Besides, the archaeologists found a bronze arrowhead and a dragonfly eye ball made of glass. Pottery, impressed ceramics and proto-porcelains were mainly concentrated in the coffin chamber to the west. In contrast to three categories mentioned above, other items like a proto-porcelain bu vase, washbasin with a tubular handle, tripod plate, bronze arrowhead and glass eye ball were placed in the eastern part of the burial chamber. 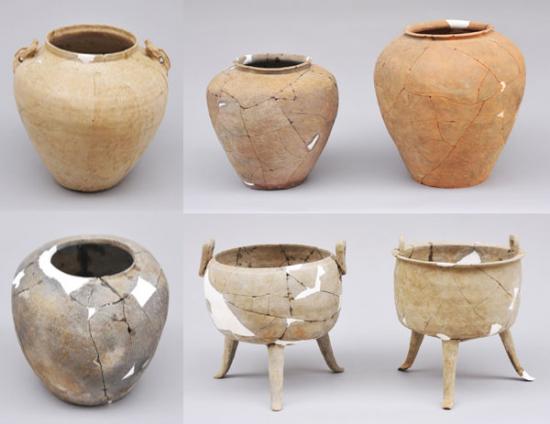 Mound tomb, a common inhumation form, seems to have been prevalent in the Wu and Yue states in the Shang-Zhou Periods, including normal and stone-chamber mound tombs. This kind of inhumation was often seen in Jiangsu, Zhejiang, Shanghai and Anhui provinces, dating to a periods from the Western Zhou to Spring and Autumn Periods. But, intensively impacted by burial system used in Central plain and Chu state, rectangular shaft earth tombs seem to have initially been present and later on commonly used within Wu and Yue states since the Late Spring and Autumn Periods. Till the Early Warring States period, the use of mound tomb may have been almost replaced. Thus, it is certain that such kind of tomb was found in Anhui for the first time; otherwise, Jiangsu and Zhejiang areas have a smaller quantity of mound tombs to be found.

It is noticeable that Taozhuang mound tomb, found in Dangtu county, Xinshi town, adjacent to Nanjing in Jiangsu province, occupies the core location within Ningzhen town area. The use of mound tombs may have undergone three phases of development: mound tomb, transition of mound tombs to rectangular shaft earth tombs, and rectangular shaft earth tomb. In conclusion, the excavations of Taozhuang site mound tomb could provide the substantial material for burial system and burial customs prevalent during the Early Warring States period. Meanwhile, the work could be taken as significant evidence for the study of mound tomb evolution within Ningzhen region. The assemble of proto-porcelain, impressed pottery, ritual pottery and imitating bronze, and the discovery of sacrificial pit may provide essential clue for the understanding of the politics, economics and cultural communication with other regions.      (Translator: Sang Li)