Research recently revealed that the Rijksmuseum’s monumental bronze statue of Shiva was cast in solid bronze. The thousand-year-old temple statue was X-rayed, along with the lorry transporting it, in the most powerful X-ray tunnel for containers of the Rotterdam customs authority. It is the first research of its kind on a museological masterpiece. 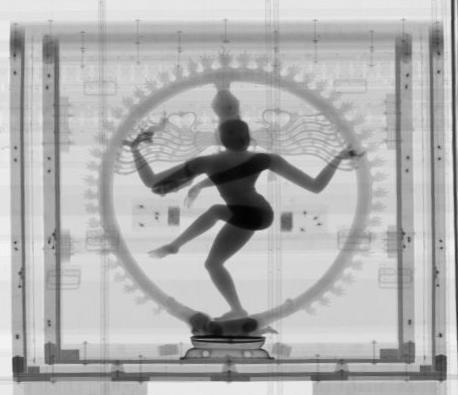 X-ray of the Shiva statue in the lorry. The dark solid shading indicates solid bronze casting.

At 153 cm x 114.5 cm, the Rijksmuseum’s Shiva is the largest known bronze statue from the Chola Dynasty (9th to 12th century) kept in a museological collection outside of India. 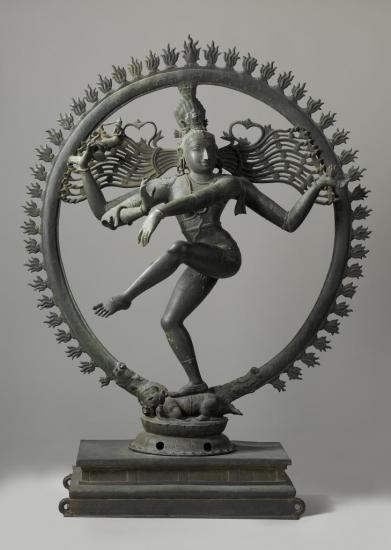 Given its weight (300 kg), the statue has always been suspected of not being hollow, as has been common practice in Europe since the Greek Antiquity.

As part of an earlier investigation, an X-ray was taken of the statue in a Rijksmuseum gallery in 1999 while visitors were evacuated as a precaution against radiation. Unfortunately, the equipment used at the time (280 KeV) was not powerful enough to determine anything definitively.

The Rotterdam X-ray tunnel of the Rotterdam customs authority offered a solution. Normally used to scan sea containers for suspicious contents, the high-energy digital radiation (9.3 MeV) offers sufficient resolution and range to distinguish between a 1mm copper wire and a 30 cm piece of steel.

The Rijksmuseum renovation project has provided  conservators and curators the opportunity to carry out in-depth research on special pieces from the Rijksmuseum collection, including this masterpiece from  the Asian Art Collection.

The statue was created ca. 1100 in South India. This region, the area that is now the state of Tamil Nadu in particular, is famous for its impressive Shiva temples, the most important of which were erected during the rule of the Chola Dynasty (9th to 12th century). Each temple had its own set of bronze statues which were carried through the city during major temple  festivals. This gives the statues their name: utsavamurti,  which is Sanskrit for ‘festival  images’. Chola bronzes were considered masterpieces of Indian bronze casting.

Anna  Ślączka,  curator of South Asian Art, comments,  ‘We had expected that the statue itself  would prove to be solid, but it was a complete surprise to discover that the aureole and the demon under Shiva’s feet are also solid.’

According to the literature, there is always at least one hollow element. A solid statue is much heavier and costly than a hollow one, and the high volume can cause damage to the bronze due to shrinking occurring during cooling. This solid bronze Shiva is evidence of a high level of mastery of bronze casting, as well as just how highly prized such statues were in the Hindu faith.

Thanks to this research, it has now been possible to determine the date of the statue more accurately. With a view to conservation work, the research has also revealed useful information on the statues' condition.

The appointment of the  curator of South Asian Art, Anna  Ślączka, was sponsored by Staal aan Zee, Tata Steel B.V., a named fund of the Rijksmuseum.