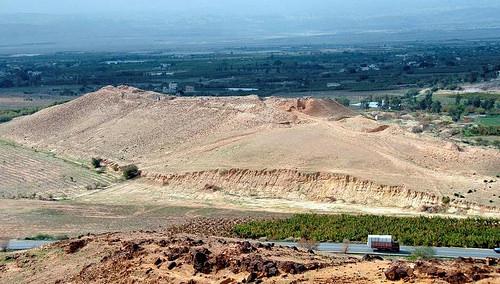 View of Tall el-Hammam. The mound is the most prominent feature on the landscape for miles around. Courtesy Tall el-Hammam Excavation Project, from the article. Making the Case for Sodom, published June 5, 2014 in Popular Archaeology.

Now having completed the tenth season of excavations, an archaeological team headed by Steven Collins of Trinity Southwest University, New Mexico, has unearthed a goldmine of ancient monumental structures and artifacts that are revealing a massive Bronze Age city-state that dominated the region of Jordan’s southern Jordan Valley, even during a time when many other great cities of the “Holy Land” region were either abandoned or in serious decline.

Known as Tall el-Hammam, Collins has been leading excavations at the imposing mound, or tel, since 2005.

"Very, very little was known about the Bronze Age in the Middle Ghor (southern Jordan Valley) before we began our excavations in 2005," says Collins. "Even most of the archaeological maps of the area were blank, or mostly so. What we’ve got on our hands is a major city-state that was, for all practical purposes, unknown to scholars before we started our Project."

Indeed, according to Collins, when comparing it with the remains of other nearby ancient cities, along with its prime location and dates of occupation, it emerges today as the best candidate for the lost city of Sodom—the infamous city that, based on the Biblical account, was destroyed by God in a fiery cataclysm because of its iniquity.

"Tall el-Hammam seemed to match every Sodom criterion demanded by the text," he says.  "Theorizing, on the basis of the Sodom texts, that Sodom was the largest of the Kikkar (the Jordan 'Disk', or 'well-watered plain' in the biblical text) cities east of the Jordan, I concluded that if one wanted to find Sodom, then one should look for the largest city on the eastern Kikkar that existed during the Middle Bronze Age, the time of Abraham and Lot. When we explored the area, the choice of Tall el-Hammam as the site of Sodom was virtually a no-brainer since it was at least five to ten times larger than all the other Bronze Age sites in the entire region, even beyond the Kikkar of the Jordan." 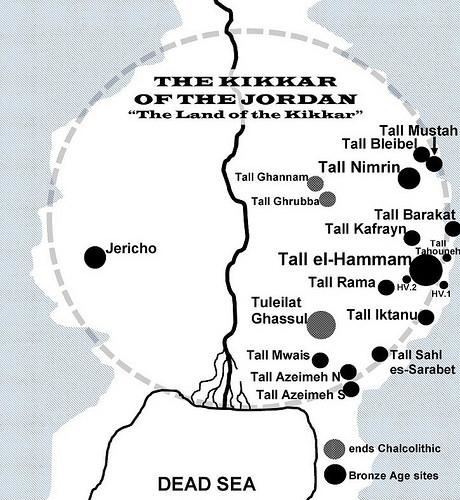 Map showing location of Tall el-Hammam in the 'Kikkar' of the Jordan with surrounding archaeological sites. Courtesy Tall el-Hammam Excavation Project (TeHEP), from the article, Making the Case for Sodom. published June 5, 2014 in Popular Archaeology.

But Collins would be the first to say that the story of this site is far more than the possible discovery of a lost Biblical city. It is, first and foremost, the story of an ancient people who built a massive Bronze Age city that thrived and prospered in a place strategically located among key water resources and trade routes, emerging as the central hub of a dominant city-state during the Early and Middle Bronze Ages (between 3500 and 1540 B.C.).

“The site is monstrous,” say Collins. He describes the site as consisting of both a lower and upper city. It features Early Bronze Age (3500 - 2350 BCE) evidence for a 5.2 meter thick city wall (built and then re-built stronger following an earthquake) as much as 10 meters in height and made entirely of mudbricks, with associated gates, towers, at least one roadway, and plazas. During the Middle Bronze Age (2000 - 1540 BCE), new construction, even more massive than those of the Early Bronze Age, replaced the old. To fortify the upper city, the Middle Bronze Age inhabitants built a massive mudbrick defensive rampart system. "It was a huge undertaking, requiring millions of bricks and, obviously, large numbers of laborers," states Collins. "The flat top of the rampart was about 7m (22 ft.) wide, and probably served as a ring-road around the upper city. The outer edge of the rampart has a footprint of approximately 250m x 400m. The 36-degree outer slope was covered with hard-packed clay, and rose over 30m (100 ft.) above the lower city. It was an impressive and formidable defensive system protecting the residences of the wealthier citizens of the city, including the king's palace and related temples and administrative buildings."* Moreover, in the lower city they followed the lines of the earlier, Early Bronze Age city walls and constructed a 4m-thick city wall built on a foundation of large stones and topped, like the upper city wall, by a mudbrick superstructure. This, too, was reinforced by an earthen/mudbrick rampart system sloping down and out at about 35-38 degrees from the new lower city wall. Put together, Collins says, the lower city defensive works rise over 100 feet above the surrounding plain, with the upper city rampart rising an additional 100+ feet above the lower city/tall. More Middle Bronze Age finds included a large monumental complex in the lower city/tall, remains of a mudbrick palatial structure in the upper city/tall (called the "red palace" because of the color of the mudbricks due to a fiery conflagration), and remains of a monumental gateway complex. The close of the 10th season in 2015 confirmed a few more surprises, including clear evidence that the Middle Bronze Age walls and fortifications were more extensive than previously thought, including the uncovering of more towers and gates. 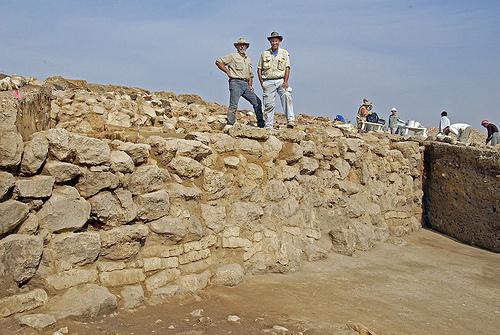 But based on the excavated evidence, the city’s Bronze Age heyday seems to have nevertheless come to a sudden, inexplicable end toward the end of the Middle Bronze Age—and the ancient city became a relative wasteland for 700 years, for the most part void of human habitation. The comparatively paltry or lack of Late Bronze Age material is a testament to this, with the same pattern shown in the smaller, nearby sites. A strange development, thinks Collins, for a great city-state that flourished even through the catastrophic climate changes that arguably led to the collapse of the great cities of the Levantine Early Bronze Age around 2350 BCE. Collins is hoping that further research and excavation may shed more light on this mystery.

Life at this ancient site returned after the 700-year gap, however. Excavations have shown a clear monumental Iron Age II (1000 - 332 BCE) presence, for example, with the discovery of a monumental gateway, city wall, monumental building, houses, and what has been interpreted as a cultic center. But these structures were not constructed until centuries later, on a relatively small scale, and the sheer magnitude of the Bronze Age construction never returned.

See the article, Making the Case for Sodom for more information, including additional images, about the excavations at Tall el-Hammam. In addition, a detailed report of the 10th season of excavations can be accessed here.