Tall el-Hammam (Jordanie) - Looking for Sodom: The North Side Story

Looking for Sodom: The North Side Story

An archaeological excavation in Jordan northeast of the Dead Sea is now uncovering evidence that may overturn a long-held tradition about the location of the infamous biblical city of Sodom.

For decades, scientists and scholars have been searching for the fabled cities of Sodom and Gomorrah and the "cities of the Plain", the cities that, according to the Biblical record, were destroyed anciently by God because of the great iniquity of their inhabitants. Recent archaeological investigations, including two currently in progress, are now raising some fascinating prospects that may possibly bring us closer to identifying the location and remains of at least one of these infamous cities, Sodom, the kingpin itself. One of these investigations may overturn long-held theories about where the infamous city was located.

The South Side Story

Traditionally, research has focused on the lands bordering the southeast end of the Dead Sea, where a narrow, arid alluvial plain abuts steeply rising highland areas. Many scholars have interpreted geographic and scriptural references documented in the Biblical account as pointing to this area:

And Lot lifted up his eyes, and beheld all the plain of Jordan, that it was well watered every where, before the Lord destroyed Sodom and Gomorrah, even as the garden of the Lord, like the land of Egypt, as thou comest unto Zoar.

Using Zoar as their operative word, many scholars thus guided themselves by the Biblical and extra-Biblical accounts of Josephus and the ancient Madaba Map as locating Zoar at the southern end of the Dead Sea. Early investigations in the area of Zoar, however, turned up nothing.  But a later expedition conducted by Paul Lapp and then continuing excavations beginning in 1975 by Thomas Schaub of Indiana University of Pennsylvania and Walter Rast of Valparaiso University after his death revealed some noteworthy finds. They explored and excavated the remains of four settlements dated to the Early Bronze Age. Excavations at the two largest sites, Bab edh-Dhra  and Numeira, turned up a 7-meter stone wall and earlier mudbrick wall, shaft tombs, house remains, and a clear destruction layer. Numerous Early Bronze Age tombs discovered in the area have been suggested to represent burials of as many as 500,000 individuals. Based on the dating, both Bab edh-Dhra and Numeira were destroyed at the same time. Some scholars have proposed that the settlements were destroyed by natural causes.  Bab edh-Drha, the largest of the sites, has been advanced by some as a possible candidate for Sodom and the smaller site of Numeira as Gomorrah. Conclusive evidence that the Biblical cities have been found? The jury is still very much out on this one.

Now a recent, little-publicized expedition involves a collaborative effort by a Russian company with specialized underwater exploration equipment and Jordanian authorities to investigate an area under the waters of the southeastern Dead Sea in the vicinity of Bab edh-Dhra. According to Zia Madani, one of the Jordanian directors of the project, NASA satellite photos showed what appeared to be objects/debris at the bottom of the sea in this area, indicators of possible submerged structural or other man-made remains. A purported Israeli exploration of the area using a submarine also indicated remains, but it was determined that they were located on the Jordanian side of the Sea, leaving further exploration under the jurisdiction of Jordan. Results still await a careful and systematic underwater investigation.

The North Side Story

What is now emerging as the most promising new prospect for Sodom, according to a number of scholars, is a site called Tall el-Hammam located approximately 14 kilometers northeast of the Dead Sea in the fertile southern Jordan River Valley of Jordan. Nestled among lush agricultural fields, it is a mound (or Tall) that rises conspicuously from a ground space encompassing one square kilometer, a very large site by any comparison. Dr. Steven Collins of Trinity Southwest University began research related to Sodom by carefully examining the biblical text in Genesis, along with geographic study and intense, broad-based archaeological surveys. All indicators brought him to the location of Tall el-Hammam.  Since then, his ongoing full-scale excavations have revealed a massive site consisting of human occupational layers from the Chalcolithic Period (or Copper Age, 4300-300 B.C.E.) through the Early Bronze (3300-3000 B.C.E.), Intermediate Bronze (2350-2000 B.C.E), and Middle Bronze (2000-1550 B.C.E.), making the settlement contemporary with well-known ancient Canaanite cities to its west in present-day Israel.  Peculiar to the site is a clear Middle Bronze period destruction layer of ash followed by a distinct occupational hiatus of 500 to 700 years until the Iron Age ( 1200-332 B.C.E.). The site seems to have been left largely abandoned during this time gap. Says a site observer, "Something terrible happened between 1800 and 1550 B.C.E., and then, for centuries thereafter, it was a no-man's land."  All of the other sites within the area have shown the same chronological profile, including the next largest site, Tall Nimrin, which some have hypothesized might be the location of biblical Admah, one of the "cities of the Plain".  Said Collins, "Every turn of the spade reinforces the occupational profile predicted for Sodom [according to biblical chronology]" (from video above).*  But he makes it clear that scholarly caution and rigorous, systematic archaeological excavation and inquiry must rule the day.  "If rigorous scholarship and responsible, objective archaeology confirm a link between Tall el-Hammam and Sodom (or between Tall Nimrin and Admah) or other possible biblical associations, then so be it. If the same approach suggests that such connections are not warranted, then so be it. But  we must not hide from the possibilities because of bias one way or the other. As A. J. Ayer's verification principle requires of any assertion, we must state clearly the criteria whereby any hypothesis can be verified and/or falsified, then follow the evidence wherever it leads. This is the strict method of science."(from Tall el-Hammam website)** 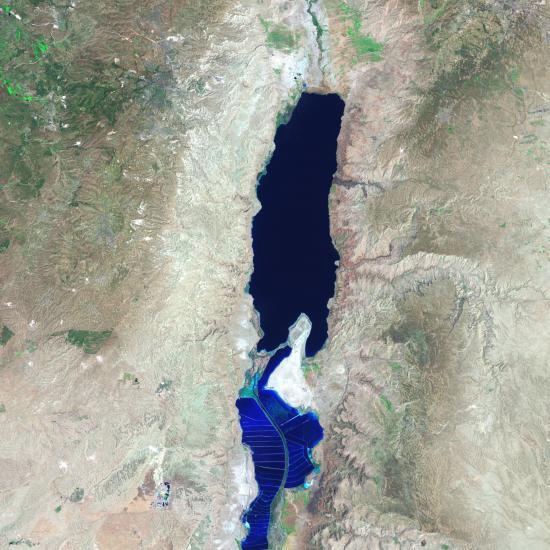 NASA satellite image of the Dead Sea. Traditionally, many scholars have conjectured the location of Sodom and Gomorrah near the southeast end of the Dead Sea. Others, including, Dr. Steven Collins of Trinity Southwest University, point to a location in the southern Jordan River Valley just northeast of the Dead Sea.  Image courtesy Jesse Allen, Earth Observatory.

Sodom and Gomorrah aside, Collins would be the first to say that any hyperbole surrounding the possible association of the site with Sodom would distract from the discovery's true value --- namely, that the excavations and analysis of the finds to date suggest that Tall el-Hammam represents what is left of the hub of a Bronze Age city-state complex at the cross-roads of major trade routes, rising to prominence as the economic powerhouse in the southern Jordan Valley and influencing and possibly controlling a system of smaller settlements in the region. Generations of kings built palaces, temples, administrative centers, and massive fortifications and defensive walls at this location.

Questions beg for answers. Who were these people and how did they live? How did they relate to the other kingdoms of the Levant, Mesopotamia, and Egypt at the time? What impact did they have on surrounding civilizations and how do the cultural remains help us to understand the world in the Levant at that time? What is their legacy?  Says Collins, "Archaeologically speaking, it is one of the most exciting sites that you can imagine because there is so much to be figured out. There are so many things [yet] to discover, so much analysis to be done.  We're touching on the periods of the Israelites, kings of the Ammonites, the people of the Bible who hung out in this area.  It is very exciting, not just from the standpoint of the "cities of the Plain", but for later periods, as well." (from video above)*

More detailed information about the Tall el-Hammam excavations and the discoveries can be found at http://www.tallelhammam.com/Tall_el_Hammam.html