If you arrived at the Taj Mahal in India before the sun rises on the day of the summer solstice (which usually occurs June 21), and walked up to the north-central portion of the garden where two pathways intersect with the waterway, and if you could step into that waterway and turn your gaze toward a pavilion to the northeast — you would see the sun rise directly over it.

If you could stay in that spot, in the waterway, for the entire day, the sun would appear to move behind you and then set in alignment with another pavilion, to the northwest. The mausoleum and minarets of theTaj Mahal are located between those two pavilions, and the rising and setting sun would appear to frame them.

Although standing in the waterway is impractical (and not allowed), the dawn and dusk would be sights to behold, and these alignments are just two among several that a physics researcher recently discovered between the solstice sun and the waterways, pavilions and pathways in the gardens of the Taj Mahal. 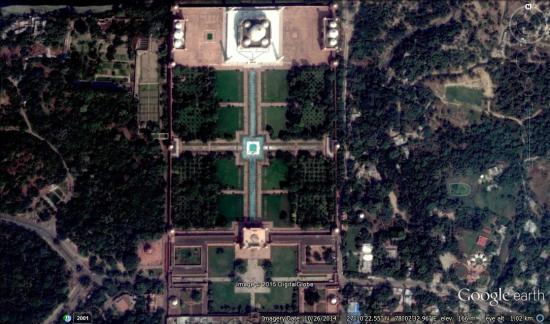 The Taj Mahal is a mausoleum built by Mughal Dynasty emperor Shah Jahan (who lived from 1592 to 1666) for his favorite wife Mumtaz Mahal (who lived 1592-1631). Her name meant "the Chosen one of the Palace."

Amelia Carolina Sparavigna, a physics professor at the Polytechnic University of Turin in Italy, reported the alignments in anarticle published recently in the journal Philica. 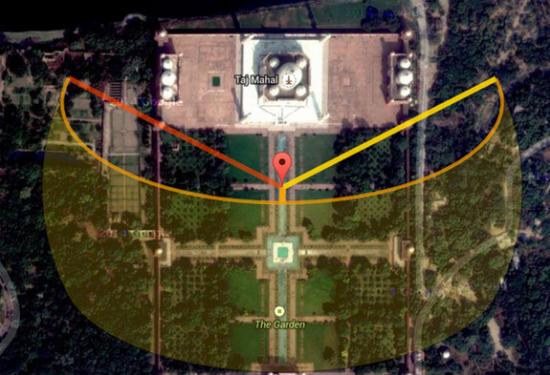 A striking alignment occurs on the north-central part of the gardens of the Taj Mahal during the summer solstice. If you were able to stand in the waterway where two paths meet, you would see the sun rise above a pavilion located to the northeast. If you were to stay in that position throughout the day, you would see the sun set in alignment with a pavilion to the northwest. The Taj Mahal and its minarets are located between these two pavilions, and the sun would appear to frame them. Credit: Image copyright Digital Globe, courtesy Amelia Carolina Sparavigna

The Mughal dynasty built the gardens in the "charbagh" style, a system developed in Persia that involves dividing a garden into four sections, Sparavigna noted in her article.

"It is well known that the Mughal gardens were created with the symbolic meaning of Gardens of Eden, with the four main canals flowing from a central spring to the four corners of the world," she wrote. Her research shows that solstice alignments can be found not only in the Taj Mahal gardens, but also in gardens built through time by different Mughal emperors. 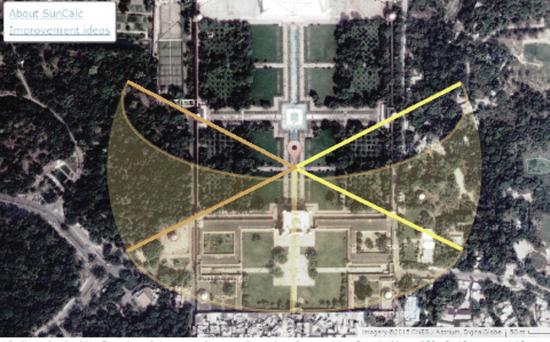 Although the alignments at the Taj Mahal likely had symbolic meanings, it's also possible that the architects of the structure used the solstice sun to help build the Taj Mahal, which is precisely oriented along a north-south axis.

"In fact, architects have six main directions: two are joining cardinal points (north-south, east-west) and four are those given by sunrise and sunset on summer and winter solstices,"Sparavignawrote in her paper.

Sparavigna made the discoveries by using an app called Sun Calc, which uses Google Earth satellite imagery to help calculate the direction at which the sun rises and sets on a given day and location.

Over the past decade the availability of free, high-resolution Google Earth imagery, combined with the development of apps like Sun Calc and Sollumis, has made it easier for researchers to discover and study solar alignments at historical sites. 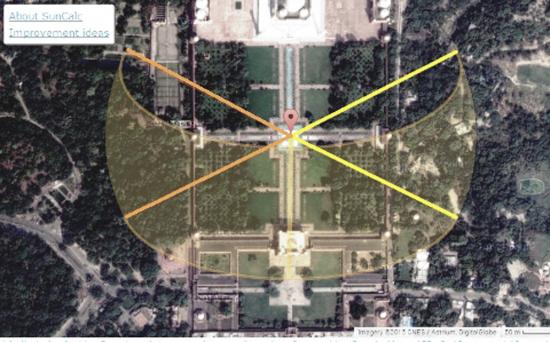 "Before software and satellites, we had to use traditional maps or plans, obtained after local surveying, and equations to determine the solar [angles] and draw them on maps. In fact, the use of satellites [makes] this work very fast and visually attractive," Sparavigna told Live Science.

In December 2014, she published another paper reporting her discovery of solstice alignments at a Roman fort in northern England.