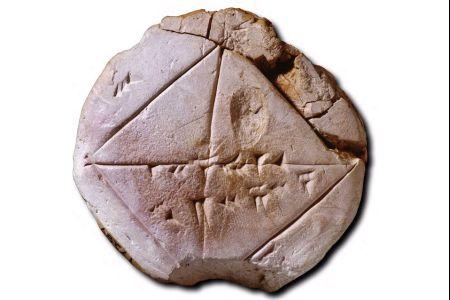 Old Babylonian "hand tablet" illustrating Pythagoras' Theorem and an approximation of the square root of two.

A New York exhibition of ancient tablets has revealed the highly sophisticated mathematical practices and education in central-southern Mesopotamia.

Before Pythagoras: The Culture of Old Babylonian Mathematics displays thirteen Babylonian tablets which show that people of the region were math experts more than 1,000 years before Greek mathematicians were even born.

Held at the New York University's Institute for the Study of the Ancient World (ISAW), the event exhibits tablets dating from the Old Babylonian Period (ca. 1900-1700 BCE) along with supplemental documentary material.

"It has long been widely recognized that many of the critical achievements of Western Civilization, including writing and the code of law that is the basis for our present-day legal system, developed in ancient Mesopotamia," Artdaily quoted ISAW director for exhibitions and public programs Jennifer Chi.

"By demonstrating the richness and sophistication of ancient Mesopotamian mathematics, Before Pythagoras adds an important dimension to the public knowledge of the history of historic cultures and attainments of present-day Iraq," she added.

The tablets, collected from the Columbia Rare Book and Manuscript Library, the University of Pennsylvania Museum of Archaeology and Anthropology, and the Yale Babylonian Collection, will be on display until December 17, 2010.

"The evidence we have for Old Babylonian mathematics is amazing not only in its abundance, but also in its range, from basic arithmetic to really challenging problems and investigations," said exhibition organizer Alexander Jones.

The modern knowledge of Babylonian mathematics is based on the work of scribes, who were young wealthy men formally trained in reading and writing.

The scribes learned and practiced mathematics while working in fields such as accounting, building-project planning, and other professions in which mathematics is essential.

"Since the documents are the actual manuscripts of the scribes… we feel as if we were looking over their shoulders as they work," said Jones.

"We can even see them getting confused and making mistakes."

The exhibited tablets are in cuneiform script and cover the full spectrum of mathematical activity from arithmetical tables copied by scribes-in-training to sophisticated work on topics today classified as number theory and algebra.

Many of the solutions used by scribes to solve the mathematical problems depended on principles that were believed to have been discovered by Greeks in the sixth century BCE and later.

Since the nineteenth century, thousands of cuneiform tablets dating to the Old Babylonian Period (c. 1900-1700 BCE) have come to light at various sites in ancient Mesopotamia (modern Iraq). A significant number record mathematical tables, problems, and calculations. In the 1920s these tablets began to be systematically studied by Otto Neugebauer, who spent two decades transcribing and interpreting tablets housed in European and American museums. His labors, and those of his associates, rivals, and successors, have revealed a rich culture of mathematical practice and education that flourished more than a thousand years before the Greek sages Thales and Pythagoras with whom histories of mathematics used to begin.

This exhibition is the first to explore the world of Old Babylonian mathematics through cuneiform tablets covering the full spectrum of mathematical activity, from arithmetical tables copied out by young scribes-in-training to sophisticated work on topics that would now be classified as number theory and algebra. The pioneering research of Neugebauer and his contemporaries concentrated on the mathematical content of the advanced texts; a selection of archival manuscripts and correspondence offers a glimpse of Neugebauer's research methods and his central role in this “heroic age.”

The cuneiform tablets illustrate three major themes: arithmetic exploiting a notation of numbers based entirely on two basic symbols; the scribal schools of Nippur; and advanced training. Many of the latter problems were much more difficult than any that they would have to deal with in professional scribal careers, and their solutions depended on principles that, before the rediscovery of the Babylonian tablets, were believed to have been discovered by the Greeks of the sixth century BCE and after.

Before Pythagoras: The Culture of Old Babylonian Mathematics is curated by Alexander Jones and Christine Proust and is on view at ISAW from November 12th–December 17th, 2010. It is the first in a series of exhibitions that will highlight research areas being explored by ISAW’s Faculty, Visiting Research Scholars and Graduate Students.

This exhibition was made possible through the support of the Leon Levy Foundation.