T0NINA (Mexique): Ballgame court world be the one described in Popol Vuh

Tonina Ballgame Court World be the one described in Popol Vuh 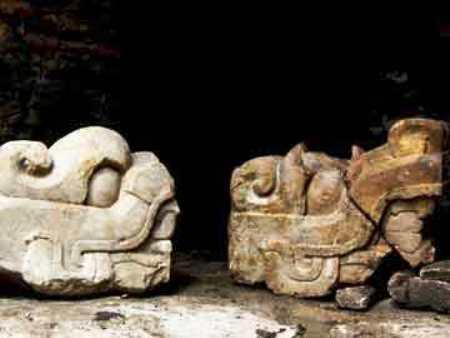 Two sculptures with the shape of a serpent’s head allow determining the form that the ritual space once had.

The recent finding of 2 sculptures with the shape of a serpent’s head that 1,500 years ago were part of the Ballgame at the Maya city of Tonina, today in Chiapas, were found by archaeologists of the National Institute of Anthropology and History (INAH). This discovering allows consolidating the hypotheses of how this ritual place looked like in the Prehispanic age; due to its architectural position it is the one that resembles more the one described in Popol Vuh, the sacred book of the Mayas.

The recent finding of the 2 sculptures adds up to other 4 similar that have appeared in different moments since 1992, all of them in Palacio del Inframundo  (Underworld Palace), at the Acropolis of Tonina. Both monuments, manufactured with limestone and 80 centimeters long, present a Teotihuacan style.

Archaeologist Juan Yadeun Angulo, responsible for the Tonina Archaeological Project, informed that the finding allowed reinforcing hypotheses regarding the form that the ritual court had.

“With this discovery, Tonina Ballgame court, 70 meters long, becomes the only example in Mexico of how these ritual spaces were in the Classic period (200-900 AD), which scoreboards were animal-shaped monuments”.

After pointing out that the study of this ballgame courts goes back 3 decades, the archaeologist from the Chiapas INAH Center detailed that since 1992 were found fragments pf figures of reptile heads, buried at the Palacio del Inframundo. To present, 4 of them have been completed, but inscriptions at the site refer to 6.

“Finally, during the maintenance works at Palacio del Inframundo we found the 2 missing representations; we compared the finding with the information of the glyphs and concluded that they date around 500 of the Common Era”.

According to Yadeun, sculptures of snake heads were attached to the lateral walls of the court until 688 AD, representing the myth mentioned in Popol Vuh regarding astral movement, specifically the equinoxes, solstices and the Ecliptic, which is the orbit described by the Earth in its movement around the Sun.

“The Ballgame court at Tonina is the one that resembles more the one described in Popol Vuh, since it is, among the ones known in Mexico, the deepest sunken ballcourt, and the sacred book of the Mayas points out that the Ballcourt of the Underworld is the meander of a plentiful river. In the case of Tonina, there is a river that often floods the court.

“By its architectonic position, Tonina Ballcourt is the one that has more relation with the tales of the Popol Vuh; for this reason, when we found the first 4 sculptures of serpent’s head, we thought they could symbolize the Wakah Chan, “Six Heaven” or “High Heaven”, and finding the last pair of sculptures confirmed it”.

Juan Yadeun explained that the number of sculptures is also related to the ancient Maya power symbols. “Serpents refer to the scepter of the rulers, considered lords of the maize, those who held the knowledge of the agricultural cycle, farming and harvest times, which only could be calculates by reading the sky”.

The reptile-shaped scoreboards remained exposed until 688 AD, declared the archaeologist, adding that they were also associated to a catastrophic event: the decline of Tonina.

At the time, forces allied with Palenque, under the command of K’inich Janaahb’ Pakal, invaded Tonina and took its ruler captive, Yukno’m Wahywal, “Lord of Fire”, who was probably killed. There was chaos, and “all this serpents and feathers iconography was destroyed and buried, because these were the symbols of the warriors that were defeated.

“The Ballcourt got into operation again in 699AD, when ruler K’inich B’aaknal Chaahk, defeated in revenge different provinces of Palenque, taking captives. Then, sculptural representations o the prisoners substituted the serpent’s head markers. This way, the Popol Vuh passage in which the “divine twins” Hunahpu and Ixbalanque destroy the lords of the underworld, represented in this case by Palenque rulers, was recreated”, declared archaeologist Yadeun.

The 6 serpent sculptures were found in more than 300 pieces; the first 4 were restored and are exposed in the Tonina Site Museum, while the 2 recently found will be intervened soon.

After determining that they were 6 the representations that adorned -1,500 years ago- the Ballcourt of Tonina, it was decided to place replicas so visitors could admire this space as it looked in the old days, which were set in the occasion of the recent Night of Astronomical Observation, attended by more than 1,500 persons. 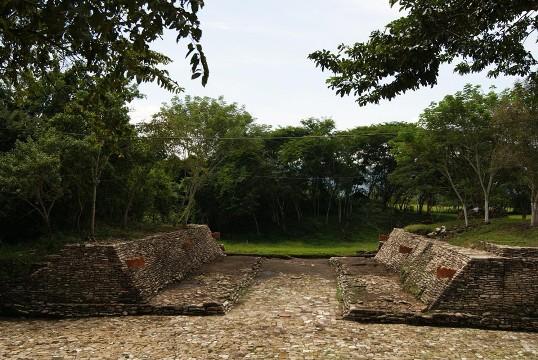