Etchings on a carved elk antler dating to nearly 11,000 years ago, may have been used to promote fertility.

A Paleolithic elk antler, carved with zigzag lines and a human figure, has been unearthed in Poland.

Analysis of the figure indicates an image on it depicts a woman with spread legs.

Carved zigzags on the object may symbolize water and life. 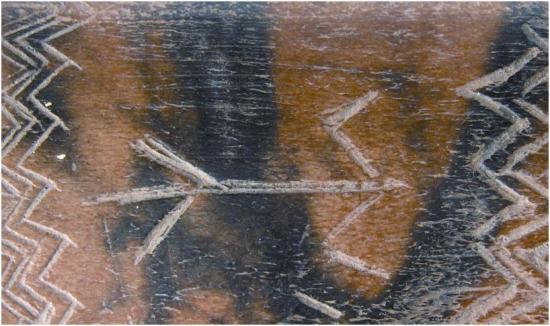 A close-up of etchings found on a 11,000-year-old elk antler. Scientists believe the figure is a woman with spread legs. Click to enlarge this image.  Tomasz Plonka

A Stone Age-era artifact carved with multiple zigzags and what is likely a woman with spread legs suggests that fertility rituals may have been important to early Europeans, according to new research.

The object, which will be documented in the March issue of the Journal of Archaeological Science, is made out of a large elk antler and has been radiocarbon dated to about 10,900 years ago.

"The ornament is composed of groups of zigzag lines and a human representation, probably a woman with spread legs with a short zigzag nearby," lead author Tomasz Płonka told Discovery News. "The woman may be nude, but the geometrical style of representation does not allow us to answer (this question)."

Płonka, a University of Wroclaw archaeologist, and his colleagues analyzed the object, unearthed by a farmer at Swidwin, Poland.

At first the scientists believed the geometrical figure carved onto the antler could have been either the mentioned woman, or a nude man raising his arms. Measurements to determine the ratio of the stick figure limbs, in addition to comparisons with other early human representations, lead the researchers to support the woman interpretation.

Zigzags are very popular motifs on artifacts from many cultures throughout the world, with many possible meanings, but Płonka said, "I think our zigzag lines are connected with water and life symbolism."

The lines also appear to have been carved by different individuals, suggesting that some group effort was involved in the creation of the object.

A geological study of the Polish site found that thawing of ice blocks occurred, increasing the number of water bodies in the region.

"Consequently, the role of aquatic environment as the source of food (fish, mammals) and perhaps transport thoroughfare gained importance," the scientists concluded.

Giant elks were the most imposing animals of the European Plain, perhaps symbolizing "the power of life," according to Płonka. The structure of the carved antler indicates its growth stage was spring or summer. The scientists believe the elk was selected and killed on purpose to make the object, which may have served a role in rituals for many years.

"Some strokes of zigzag lines, which are near the edge of the ornamented surfaces are worn," Płonka explained.

Co-author Krzysztof Kowalski of the National Museum in Szczecin told Discovery News that he and his colleagues are not certain what culture produced the piece, but they've narrowed it down to two probable candidates: the Federmesser or the Ahrensburg cultures.

The Federmesser culture is known for its distinctive flint blade tools, while the Ahrensburg people were famous for their animal-hunting prowess. Intact Ahrensburgian reindeer skeletons with arrowheads in their chests suggest some animals were sacrificed during rituals.

Other European objects, such as an amber figurine found in Weitsche, Germany, provide "evidence there were richly ornamented ritual artifacts at the end of the Paleolithic in Central Europe," Płonka said.

The researchers aren't yet certain if the images on the carved antler are associated with Venus figurines, statuettes of women with exaggerated sexual features that date to as early as 35,000 years ago. Some Venus figurines have been excavated in Poland not too far from the Swidwin site.