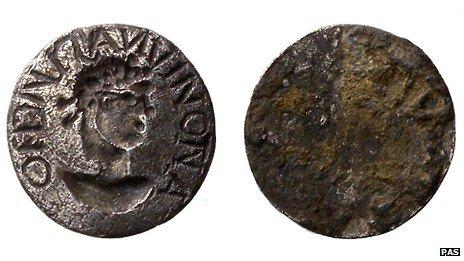 The 11mm (0.43in) disc was probably a bezel from a finger ring, experts said

A small Roman silver disc, thought to have been part of a signet ring, has revealed evidence of Christian worship in late Roman Norfolk.

The disc, circa 312 to 410AD, found near Swaffham in February, is inscribed 'Antonius, may you live in God'.

Adrian Marsden, finds officer based at Norwich Castle Museum, said: "We have practically no other evidence for any Christians in Norfolk."

The disc was declared treasure at an inquest in King's Lynn.

Mr Marsden added: "The disc that would have been set into the bezel from a signet ring constitutes important evidence for Christianity in late Roman Norfolk. 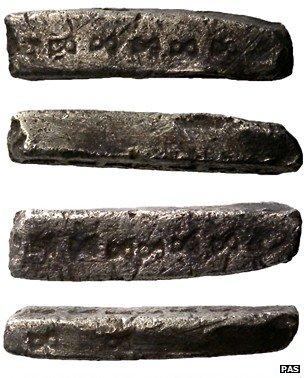 The ingot indicates how trade was conducted in the Viking period

"The inscription, translating as 'Antonius, may you live in God', is a Christian formula and we have practically no other evidence - apart from a broadly similar ring in gold from Brancaster - for any Christians in Norfolk.

"On one level, of course, this is good negative evidence, implying that most people at the time worshipped the old gods. On another, it shows there were one or two Christians around.

"The ring would have been a gift to Antonius, perhaps on the occasion of his conversion, coming of age or betrothal/marriage."

"The Vikings didn't use coined money at this date but bullion, so these ingots are useful examples of how trade was carried on," said Mr Marsden.

The 28mm (1.1in) ingot, circa 850 to 1000AD, was found by a metal detector enthusiast near Downham Market last summer and features a decorative motif typical on jewellery of the Viking period.

Mr Marsden added: "The ingot offers some interesting possibilities for metallurgical analysis, to look at how pure they are and what sort of other metals if any might be alloyed with the silver."

The Norwich Castle Museum hopes to acquire the ingot and Roman disc for their collection.