Svätý Jur (Slovaquie) : one of the most important Slavic castles

For an archaeologist, the most important thing is his most recent rare discovery, says Július Vavák.

Vavák has found the first Arab coin from the area of the Great Moravia Empire, at the site in Svätý Jur, the now small town outside Bratislava that once was one of the most important Slavic castles in the region.

What, in your opinion, are the most important discoveries from Svätý Jur? What will happen to them?

Sometimes you say to yourself that you have discovered a really awesome object. But there are many awesome discoveries from the fort that took a few years to find, like a deposit which included jewellery (earrings, a knob pendant and a ring), a knife, a spear and a vessel. 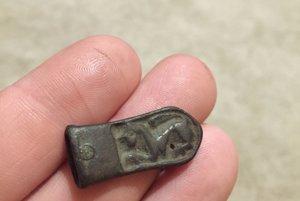 Another significant discovery was of a quadratic building on stone foundations from the Great Moravian period, which has few comparisons. For an archaeologist, the most important thing is his most recent rare discovery. For me, this is a coin, a dirham from the times of the Abbasid caliphate, or Arab Empire. We have many different coins from the fort: Roman coins, one Celtic coin and others from the 17th century. But this one is extraordinary, even though it is incomplete and quite damaged. It is from 867 and was emitted by Caliph Al-Mu´tazz.

Arabic coin from the 9th century - Source: Archive of Malokarpatské Múzeum in Pezinok

What is the function of the fort of Svätý Jur within Bratislava Gate – compared to other forts from that period?

Map of the fortress - Source: Archive of Malokarpatské Múzeum in Pezinok

Part of the fortification

We have some ideas, but we are not sure. Its function in the 8th century was especially military-strategic. We cannot forget the fact that the builders of the fort were Slavs friendly to the Avar Khaganate, but experts never thought about it this way because some of our discoveries had been missing at the time. The artefacts from the 9th to 10th century tell us that the fort was an important military refuge, but we also know that it was a manufacturing centre and a very populated place. The castles and hillforts in Bratislava and Devín were also border fortresses. We know that the monarch of Great Moravia, Rastislav, occasionally resided from time to time at the Devín castle, and from a Frankish source we know that it was called Castle Dovina during that time. This castle and three other small forts at the foot of Devinska Kobyla protected both the ford of the Morava and the Danube rivers and the crossroads of trade routes. The castle looks like it could have belonged to the Moravian part of the Great Moravian Empire. Bratislava castle, also known as the Preslava castle, was an interesting place, too, and very likely one of the most important castles of the Nitra principality. It is possible that our castle in Borinka - a hillfort in Svätý Jur (whose name we do not know) and two other forts on the other side of the Little Carpathians – sat on the borders between the joined principalities Nitra and Moravia. I think that the castle of Svätý Jur supplied castles in Bratislava and Devín with products and military support, as well as possible refugium at the rear. The fort in Svätý Jur was probably one of the most important castle in the region, just after Preslava and Dovina, although each castle had its own function.

Can you say more about the protection of the ancient roads leading through the Little Carpathian valleys during the early Middle Ages?

The protection of the roads was provided by castles, and we can see this in the affiliation of Borinka with Svätý Jur. It is also possible that the trade caravans were also protected by armed men. The Carpathian passes could have been safe during times of peace, but protection of the roads was important. The Great Moravian people had to be able to deliver rare goods, and the traders needed a feeling of security.