The sharp-edged stones were made at least 60,000 years before modern humans reached the island of Sulawesi—but who made them? 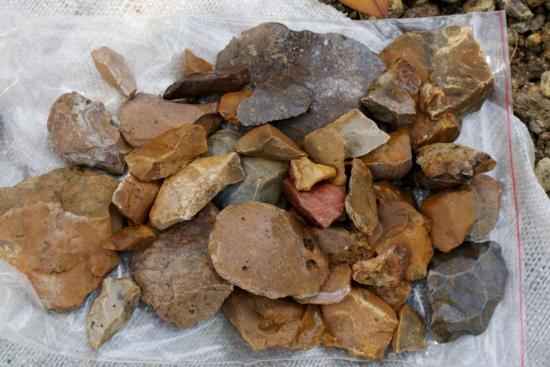 These ancient stone artifacts were found scattered among surface gravels near the Talepu sites. Unfortunately, scientists can’t determine how old they are, since they were found on the surface. PHOTOGRAPH BY ERICK SETIABUDI

Stone tools found on the Indonesian island of Sulawesi predate the arrival of modern humans to the area by more than 60,000 years—but researchers aren’t sure who made them.

The perplexing artifacts, announced on Wednesday in Nature, are most likely between 118,000 and 194,000 years old, though some may be even older. The keen-edged flakes of stone were excavated from an ancient river floodplain in southwest Sulawesi, near the present-day village of Talepu. Some even bear telltale signs of being hammered into shape.

But today’s best evidence indicates that modern Homo sapiens didn’t arrive on neighboring islands until about 50,000 years ago, well after the mysterious toolmakers left their wares behind. The find further indicates that some earlier form of human was more successful at traversing the south Pacific’s island networks than previously believed.

“It’s an excellent paper,” says paleoanthropologist Russell Ciochon of the University of Iowa, who wasn’t involved with the study. “It establishes for certain that an archaic human was living in Sulawesi ... And that’s an exciting finding.”

Gerrit van den Bergh of the University of Wollongong in Australia, the study’s lead author, says that the tools likely were made by Homo erectus, an ancient hominin that lived on nearby islands beginning at least 1.5 million years ago. It’s also possible that the toolmakers are yet-undiscovered relatives of Homo floresiensis, a “hobbit” hominin found on the island of Flores, just south of Sulawesi, between 18,000 and 95,000 years ago, if not earlier.

But the team can’t say for sure which ancient human made the tools. The flakes—crafted from broken riverbed cobbles—aren’t distinctive enough to point to any particular toolmaker: For more than three million years, numerous species of ancient humans made tools using similarly simple methods.

And Homo erectus and the meter-tall Homo floresiensis used tools of various sizes, making it impossible to use the tools’ dimensions to determine their owners’ stature.

“Tiny hominins with tiny hands might still have used outsized artifacts, and vice-versa,” says Adam Brumm of Griffith University in Australia, a co-author of the study and an expert on Homo floresiensis tools.

The find underscores that ancient humans were surprisingly mobile, proliferating across the South Pacific long before the arrival of seafaring modern humans—a fact advanced by University of New England archaeologist Michael Morwood, the co-discoverer of Homo floresiensis and the study’s senior author. (Morwood died unexpectedly in 2013.)

Prior to Morwood and others’ work, scientists had surmised that ancient humans couldn’t have crossed the powerful ocean currents between Flores and the islands to the west without boats, preventing the island’s habitation until Homo sapiens arrived between 40,000 and 50,000 years ago.

But finds on Flores clearly show that ancient humans lived for hundreds of thousands of years on the island, perhaps descended from Homo erectus individuals washed eastward atop tsunami debris. Some Flores tools have even been dated to more than a million years old.

The Walanae River at Paroto, two kilometers east of Talepu, the village on Sulawesi where researchers found the troves of ancient tools. Stone artifacts also have been recovered from Walanae, though they appear to be younger than the Talepu tools. PHOTOGRAPH BY GERRIT VAN DEN BERGH

Morwood’s team then turned its focus to Sulawesi, where researchers had been stumbling across stone tools since at least the 1970s. But these artifacts had not been found in a geological context that would assign them a date.

Researchers finally struck pay dirt in 2007, when van den Bergh walked along a newly built road in Talepu with a member of the local cultural heritage department—and spotted stone tools in the exposed hillside. “There were so many artifacts, we just had to dig there,” says van den Bergh. “We were quite lucky, I guess.”

The team excavated the site from 2007 to 2012. At the time, Morwood was confident that the tools they found were at least as old as the Flores remains. In a 2010 interview with The Guardian, Morwood teased that the Sulawesi tools could be up to two million years old, a find that, if it held, would further upend anthropologists’ understanding of when humans arrived in the south Pacific.

But Talepu’s complicated geochemistry stymied efforts to date the tools until Bo Li of the University of Wollongong employed a laborious, state-of-the-art dating method, called MET-pIRIR, on mineral grains found with the tools. When he combined the mineral dating with other data, Li determined that the tools were most likely between 118,000 and 194,000 years ago, and no more than 780,000 years old.

Morwood died before he received confirmation of the tools’ ancient origins. His colleagues, however, are keeping his vision alive, and plan to return to Sulawesi to hunt for fossils of the enigmatic humans who left behind the riverside tools.

When asked how Morwood would have proceeded after publishing this study, Brumm says: “...with a twinkle in his eyes, he would have said, ‘So where shall we dig next? He was not one to bask in glory. There was always another, more interesting hominin fossil to find. And he badly wanted to find it.”