New archaeological evidence has dramatically pushed back the accepted earliest human occupation of the Indonesian island of Sulawesi to more than 100,000 years ago – 60,000 years older than previously thought.

It has long been believed that humans first entered the island sometime between 40,000 and 60,000 years ago. Sulawesi could have been a stepping stone for the first people to arrive in Australia 50,000 to 60,000 years ago.

Now a research team, led by the University of Wollongong, has reported, in the prestigious Nature magazine, the existence of stone artefacts on Sulawesi dated to more than 100,000 years using the latest generation of luminescence dating technique for feldspars minerals. 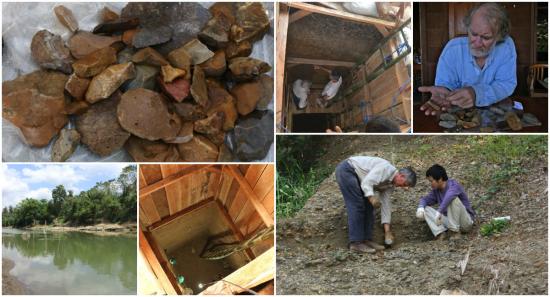 Clockwise from top left: Surface collected stone artefacts that were found lying scattered on the gravelly surface near Talepu; The research team taking dating samples from the baulks of the excavation; Professor Mike Morwood in 2009 examining stone artefacts collected near Talepu; Professor Bert Roberts and Dr Bo Li taking Optical dating samples in an ancient terrace fill on the banks of the Walanae River near Paroto; The excavation site; The Walanae River at Paroto, at 2 km east of Talepu. An ancient gravel terrace deposit containing stone artefacts and Anoa fossils crops out. The age of this deposit is younger than the Talepu gravels.

Researchers, led by project director Dr Gerrit van den Bergh from UOW’s Centre for Archaeological Science (CAS) excavated an open-air site called Talepu in the south western arm of Sulawesi and unearthed stone tools, together with the fossil remains of extinct and extant megafauna. The excavations went down to a staggering 12 metre depth.

“It now seems that before modern humans entered the island, there might have been pre-modern hominins on Sulawesi at a much earlier stage,” Dr van den Bergh said.

Dr van den Bergh said it was possible that -- like the island of Flores where the ‘Hobbit’ (Homo floresiensis) fossils were discovered more than a decade ago – fossils of pre modern humans may yet be found on Sulawesi.

“Sulawesi, like Flores, could have been a natural laboratory for human evolution under isolated conditions,” Dr van den Bergh said.

Dr van den Bergh discovered the Talepu site in 2007 while surveying the area with Mr Anwar Akib, from the local Cultural Heritage Department.

The survey formed part of a collaboration between the Geological Agency of Indonesia and the late Professor Mike Morwood – also from CAS and leader of the team that discovered the ‘Hobbit’. At the time, Dr van den Bergh was working as a Research Associate with Professor Morwood.

Dr van den Bergh (pictured above left with Dr Bo Li) said that a new road had been cut at Talepu and had passed through gravel deposits exposing many stone artefacts on the surface. The age of the artefacts was not clear, however, and early attempts to date the deposits failed to reach a conclusive answer.

Their dating results obtained using Dr Li’s method provided a major breakthrough, showing that the stone tools were buried in sediments deposited more than 100,000 years ago. These luminescence ages were supported by those obtained by the fossil teeth in the deeper deposits at the site using another dating technique, based on the decay of naturally occurring uranium absorbed by the teeth after burial.

The species of human that made the stone tools remains an enigma, as no human fossils have been found at Talepu. But the old ages suggest that the toolmakers were either an archaic lineage of humans or – more controversially – some of earliest modern humans to reach Southeast Asia and perhaps the ancestors of the first people to arrive in Australia.