New achievements from the excavation at the Yejiashan West Zhou graveyard, Suizhou, Hubei

The Yejiashan graveyard in Suizhou is located in Jiangzhai Village, Xihe Town, an Economic Development Zone of Suizhou, and less than 1km north away from the excavated Xihuayuan and Miaotaizi sites. Its geographic coordinates are 113°27′28" in east longitude and 31°45′22" in north latitude, and its altitude is 88 meters.

This excavation was carried out between Feb.18th to Jun.14th, 2011 and 3700 square meters was disclosed in all 37 grids with 10×10m each in the excavated zone. In the end, there were 65 tombs and 1 horse pit discovered, and almost all the tombs were excavated excluding the 2 tombs which were under the residential houses. The majority of the excavated tombs had grave goods and there were up to 739 pieces (sets) unearthed, including potteries, bronzes, ceramics, lacquer and wooden artifacts, jades and lithic tools. Among them, the bronzes were 325 pieces. According to the typological characters of the artifacts, it was assumed that these artifacts were dated to the early West Zhou dynasty. Moreover, the scripts “曾侯” (Marquis Zeng) and “曾侯谏” (Marquis Zeng Jian) were found on the bonzes unearthed from several tombs, indicating that the graveyard should be related to the Zeng State or Marquis Zeng during the early West Zhou dynasty. 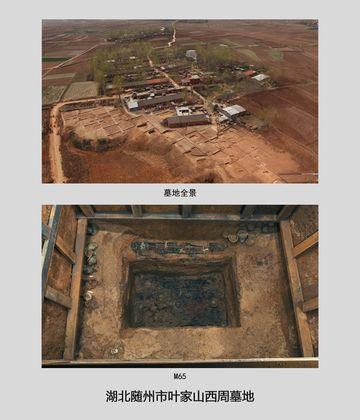 The excavation did not show that there were burial mounds, tomb architectures, tomb walls, tomb sacrifices and other related relics because the land had been smoothed several times. All the tombs were rectangular shaft earth pits and most of them had burial furniture. Although the burial furniture were rotten, it could still be told through the traces that the tombs were one outer coffin and one inner coffin tomb, one outer coffin and two inner coffins tomb, and single coffin tomb. In addition, most of the tombs had grave goods which were all placed on the two-tier platform made of mellow soil. As well a few tombs had waist pits, and round or rectangular holes used for putting coffins down to the pits, were found at the sides of some large-scaled tombs.

The achievements from this excavation are mainly the below.
Firstly, it is the first time to discover a high-level noble cemetery like the Yejiashan graveyard in the Hubei archaeological history of past 30 years. Based on the level and scale of the graveyard, this is a most important archaeological discovery in the Jianghan area and even in the Yangzi River reaches. The well-preserved disclosed high-level noble tombs dating to the early West Zhou dynasty, the rich unearthed cultural relics and their clear dating characters were unique in the past archaeological discoveries in Hubei.

Secondly, the large number of unearthed potteries, bronzes, primitive porcelains and others dating to the West Zhou dynasty are not only well-preserved, but have definite assemblage and coexist relationship. They are a group of important and standard artifacts for studying the West Zhou culture in the Han River reaches in Hubei.

Fifthly, most of the bronzes unearthed this time have scripts and the total number of the scripts reaches to 400 characteristics. Their content includes not only some common scripts for clan and states’ names, but a large number of people’s names which were never seen before. This is significant for scheduling the sequence of the tombs and studying the relations between the Zeng State and other states.

Sixthly, the Yejiashan graveyard supplied the newest materials for studying the states in the east Han River. Much attention has been paid on the distribution of the states in the east Han River. Recently, a large number of bronzes were unearthed successively in the Han River reaches. Particularly after the bronze group of the Marquis Er unearthed in Yangzishan, Suizhou, the issue about the ancient Er State has been gradually made clear. The discovery of the bronzes of Marquis Zeng dating to the early West Zhou in Yejiashan, indicated that the Zeng State and the Er State might have been two ancient states existing in Suizhou at the same time during the early West Zhou.      (Translator: Zhai Shaodong)