Sudbury (G-B): Prehistoric beads were made from British shells 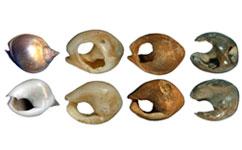 UK researchers used the new technique to analyse beads discovered in an Early Bronze Age grave near Sudbury in Suffolk. The grave is thought to have belonged to a young woman.

'They could have been made from ivory or bone; it wasn't immediately obvious it was shell,' explains Professor Julie Wilson of the University of York who oversaw the project, published in Plos One.

''Once you know the bead is made from shell,then if you can identify what kind of shell you're looking at, you can start working out whether or not the Great Cornard people had been travelling very far to get the raw materials, or if this is evidence of trading,' says Dr Beatrice Demarchi of the University of York, lead researcher of the study.

During the manufacture of beads, and in the burial environment, many of the shells lose the features that could be used to identify the species used.

Most techniques used by scientists to identify such shells rely on having to take tiny samples from them, which ultimately damages often precious, ancient material. But UK scientists developed a way to gain information on the taxonomy of shell beads quickly and ¿using either non-destructive or micro-destructive techniques.

Amino acid analysis uses such a small amount of the shell bead – less than two micrograms – that the damage to the shell is minimal so its archaeological value is maintained.

After analysing the shells from the Subbury grave, Wilson and her colleagues showed that most of the beads were made from the same type of shell. But one bead produced different data to the rest.

'We hadn't actually seen the beads, just the data,' says Wilson. 'But then we found out that the bead from which the odd data was taken actually looked very different to the others as well.'

Five of the six beads analysed had patterns closely resembling dog whelk shells, while one was shown to be most similar to a tusk shell.

'Dog whelks especially are common to the UK so it is more probable that this ornament had been made by using local raw materials rather than trading further,' says Demarchi.

Amino acids are the building blocks of proteins and their analysis can give us information on the overall protein composition of a shell. If two taxa have very different protein compositions, then we are able to tell them apart, so once the analysis is complete the researchers could run the protein composition through a database to find out which species it most closely resembled. Although the fine detail (protein sequence) is lost in this type of analysis, in most cases the information is still enough to be able to discriminate between shell taxa.

'It's like when you have two buildings. If they're upright and whole then you can see they look very different. If you take them down and only have the bricks you can still tell them apart but you can't see what they would have been when whole,' explains Demarchi. 'Amino acid analysis enables us to take the bricks, sort them out in groups, and get a clearer idea of how they would look when whole.'