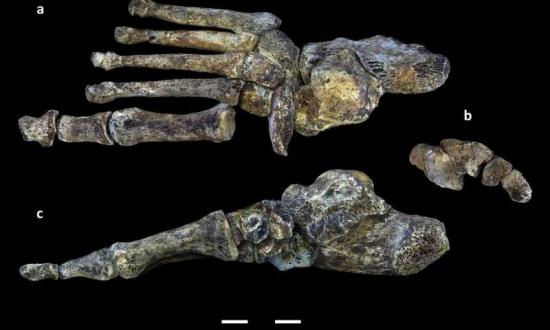 A new study on Homo naledi, the extinct human relative whose remains were discovered in a South African cave and introduced to the world last month, suggests that although its feet were the most human-like part of its body, H. naledididn't use them to walk in the same way we do. Detailed analysis of 107 foot bones indicates that H. naledi was well adapted for standing and walking on two feet, but that it also was likely comfortable climbing trees. The work, published in Nature Communications today with a concurrent study on H. naledi's hands, provides insight into the skeletal form and function that may have characterized early members of our genus.

"Homo naledi's foot is far more advanced than other parts of its body, for instance, its shoulders, skull, or pelvis," said William Harcourt-Smith, lead author of the new paper, resident research associate in the American Museum of Natural History's Division of Paleontology, and assistant professor at CUNY's Lehman College. "Quite obviously, having a very human-like foot was advantageous to this creature because it was the foot that lost its primitive, or ape-like, features first. That can tell us a great deal in terms of the selective pressures this species was facing."

Modern humans (Homo sapiens) and extinct species including Homo neanderthalensis, Homo erectus, Homo habilis, and Homo naledi are part of the Homo genus. The Homo genus and theAustralopithecus genus (extinct, close relatives of Homo) are referred to as hominins.

Walking upright is one of the defining features of the human lineage, and as feet are the only structure that make contact with the ground in bipeds, they can tell us a lot about our ancient relatives' way of moving. In the Dinaledi Chamber of the Rising Star cave system in South Africa, the H. naledi excavation team recovered at least one specimen from almost every single bone in the new species' foot. These bones represent at least five individuals--two juveniles and three adults--including one nearly complete foot.

Analysis of these bones has shown that the foot bones look much more like human bones than chimpanzee bones, except for two major areas: the toes of H. naledi's foot were more curved and their feet were generally flatter than seen in the average modern human. Despite the close similarity in the foot structure, H. naledi likely did not walk exactly like us, the researchers say. Clues from other parts of its body--long and curved fingers, and a more ape-like shoulder joint--paint a picture of a creature that was undoubtedly bipedal but also a tree climber.

"This species has a unique combination of traits below the neck, and that adds another type of bipedalism to our record of human evolution," Harcourt-Smith said. "There were lots of different experiments happening within hominins--it wasn't just a linear route to how we walk today. We are a messy lineage, and not just in our skulls and our teeth. We're messy in the way we moved around."

Because the H. naledi fossils have not yet been dated, researchers don't know how this form of bipedalism fits into our family tree.

"Regardless of age, this species is going to cause a paradigm shift in the way we think about human evolution, not only in the behavioral implications--which are fascinating--but in morphological and anatomical terms," Harcourt-Smith said.