The authors first discuss the phylogeny of IE languages:

It seems clear that the ancestor of the Anatolian subgroup (which includes Hittite) separated from the other dialects of PIE first, so from a cladistic point of view Anatolian is half the IE family (e.g., Jasanoff 2003). Within the non-Anatolian half, it appears that the ancestor of the Tocharian subgroup (whose attested languages were spoken in Xinjiang, today in western China, until approximately the tenth century ce) separated from the other dialects before the latter had diverged much (e.g., Winter 1998, Ringe 2000). It follows that an item inherited by two or more of the daughter subgroups can be reconstructed for “early” PIE only if it is attested in at least one Anatolian language and at least one non-Anatolian language, and such an item can be reconstructed for the ancestor of the non-Anatolian subgroups only if it is attested in one or both of the Tocharian languages and in some other IE language.

This doesn't seem to be evidence for the steppe hypothesis, but rather for the Anatolian one. The authors hypothesis a pre-4000BC Out-of-Steppe migration into the Balkans (migration 1 left), but that takes you only into the Balkans and not into all the places in Anatolia where IE languages were spoken historically (right). The hypothesis that pre-4000BC Proto-Anatolians migrated from the steppe must bridge quite a lot of ground to reach the historical Anatolians of the 2nd and 1st millennium BC. It must also explain that the physical anthropological change in Anatolia in the Chalcolithic and the Bronze Age is associated with migration of brachycephals which seems incompatible with movements from either the Copper Age Balkans or the Pontic-Caspian steppe that were occupied by gracile and robust dolicho-mesocephals respectively. Migration 1 is of course possible but it is hardly a better explanation for the first-order split of Anatolian vs. post-Anatolian Indo-European than expansions from the Neolithic "womb of nations" that included Anatolia. Arrows 1 and 2 doharmonize with the proposed linguistic phylogeny. But, why would steppe Indo-Europeans first migrate southwest, then east, and then west? What was the cause of this particular sequence of migrations (which is invoked to harmonize the the linguistic evidence)? I am perfectly willing to consider linguistic replacement in Anatolia (it happened at least twice in recorded history, first with Greek and then with Turkish), but the case is not particularly strong that it happened from a pre-4000BC Out-of-Steppe movement via the eastern Balkans. As for the Tocharians, their recorded language of the 1st millennium AD is 4ky removed from movement 2 to the Altai, so even if future discoveries convincingly prove this movement, the yawning gap of 4 thousand years will remain. My analysis of modern Uygurs shows that the Caucasoid element in the Turkic inhabitants of Eastern Turkestan (which presumably includes the Indo-European element) is complex, and perfectly compatible with a non-steppe, but rather West Asian ultimate origin of Tocharians. 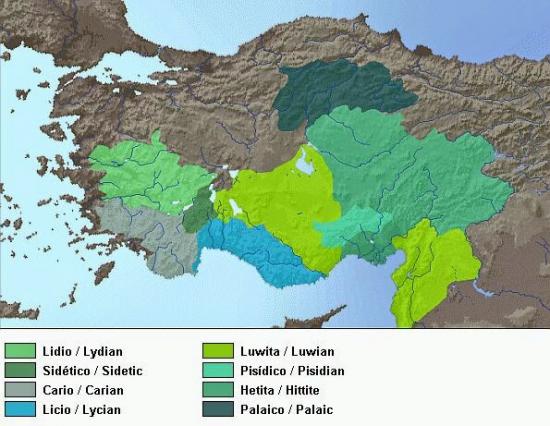 The authors next discuss the wheel vocabulary . The idea is that wheeled vehicles weren't known when farmers colonized Europe, so if PIE has terminology for wheeled vehicles, then it has to be later. I don't find these arguments convincing, because words change meanings, and PIE doesn't have a word for wheeled vehicle, but for a variety of its components, each of which might have meant something else originally. 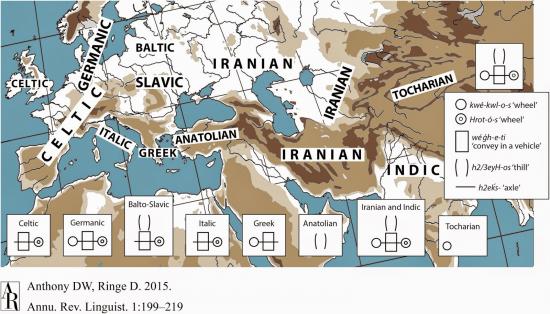 But, even if one concedes wheeled vehicles, it's still the case that neither Anatolian nor Tocharian has a repertoire of many terms for wheeled vehicles. So, all the wheel vocabulary proves (if one accepts it at all) is that post-Anatolian or even post-Tocharian languages had wheeled vehicles. This then provides a chronological constraint to the spread of post-Anatolian (or post-Tocharian) IE languages after the invention of wheeled vehicles, but tells us absolutely nothing about where they spread from (and hence the steppe hypothesis) but only when they spread. Thus, the wheel vocabulary is consistent with a whole number of theories that propose a spread of IE languages after the invention of wheeled vehicles and provides no special support for the steppe hypothesis over others.

The authors next discuss the lexical borrowings into Proto-Uralic and Proto-Finno-Ugrian. But, this only shows that early Uralic and Finno-Ugrian speakers came into contact with early Indo-Europeans, not that Indo-Europeans originated near Uralic and Finno-Ugrian speakers. Moreover, the authors also mention that PIE shows evidence of contacts with Proto-Kartvelian speakers. By the same line of argument, the PIE homeland should be close to Georgia where Proto-Kartvelian languages were presumably spoken. Indeed, Uralic languages are very widely spoken from Europe to eastern Siberia and the Uralic geographical constraint is much weaker than the Kartvelian one, as there are many parts of Eurasia (including the Pontic-Caspian steppe) that Uralic languages may have been spoken of, but a very small part of Eurasia (the southern Caucasus and northeastern Anatolia) for which any evidence of Kartvelians exists. The authors suggest that a steppe PIE explains both Proto-Uralic and Proto-Kartvelian borrowings as the steppe is between presumable speakers of these two language families. True, but Northeast and Northwest Caucasian speakers lie between Proto-Kartvelians and the steppe. A PIE origin on the steppe must bypass the NW/NE Caucasian speakers to bring Indo-Europeans in contact with Kartvelians, and a PIE origin in highland West Asia must bypass the same to bring them into contact with Uralic speakers. In sum, I don't see at all how the evidence from lexical borrowings favors the steppe hypothesis strongly.

The authors next discuss the archaeological implications of placing the homeland on the steppe and discuss how it may have been carried out. I continue to think that the spread of metallurgy is the most obvious candidate for an enabling factor. Having the capacity to build and trade metal objects, or kill people with metal weapons gives one obvious advantages that are unquestionable in every circumstance in the way that flocks of cattle and sheep, horses, and wheeled vehicles are not. Not only Indo-Europeans but also Semitic speakers may have been enabled by metallurgy to spread their languages. Neither Indo-Europeans nor Semites may have been master metallurgists, but metallurgical progress enabled language spread just as other technological innovations (e.g., stirrups, firearms, ocean-worthy boats) did in more recent history.

The authors then criticize past work on phylogenetic modeling of languages and end their article with this sentence:

Work currently in progress by the team of Chang, Hall, Cathcart, and Garrett promises to fill that gap.

An article by these authors is listed in the journal Language website, albeit without the actual text of the article yet:

Discussion of Indo-European origins and dispersal focuses on two hypotheses. Qualitative evidence from reconstructed vocabulary and correlations with archaeological data suggest that Indo-European languages originated in the Pontic-Caspian steppe and spread together with cultural innovations associated with pastoralism, beginning c. 6500–5500 BP. An alternative hypothesis, according to which Indo-European languages spread with the diffusion of farming from Anatolia, beginning c. 9500–8000 BP, is supported by statistical phylogenetic and phylogeographic analyses of lexical traits. The time and place of the Indo-European ancestor language therefore remain disputed. Here we present a phylogenetic analysis in which ancestry constraints permit more accurate inference of rates of change, based on observed changes between ancient or medieval languages and their modern descendants, and we show that the result strongly supports the steppe hypothesis. Positing ancestry constraints also reveals that homoplasy is common in lexical traits, contrary to the assumptions of previous work. We show that lexical traits undergo recurrent evolution due to recurring patterns of semantic and morphological change.

It's not clear what the article itself shows. If this is simply a criticism of the "old" dates of the first PIE split proposed by Gray/Atkinson and Bouckaert et al., then this does not really support the steppe hypothesis uniquely, but rather argues against the Neolithic Anatolian one. However, there are many hypotheses other than these two (including my Bronze Age expansion of Indo-European languages hypothesis from West Asia which is somewhat related to that of Stanislav Grigoriev) that can accommodate a later split of PIE.

To conclude, I think that archaeology and linguistics have failed to make a convincing case for steppe Proto-Indo-Europeans. It is certainly a respectable and popular theory but the evidence for it is hardly "so strong" as to create serious problems for other hypotheses. Hopefully, archaeogenetics will succeed where archaeology and linguistics (despite their valiant efforts) have failed.

The Indo-European Homeland from Linguistic and Archaeological Perspectives

Archaeological evidence and linguistic evidence converge in support of an origin of Indo-European languages on the Pontic-Caspian steppes around 4,000 years BCE. The evidence is so strong that arguments in support of other hypotheses should be reexamined.