A relief depicting a 2,000-year-old chariot race scene and new gladiator names has been discovered at an archeological dig in Muğla, proving the area was an important center for sporting events. 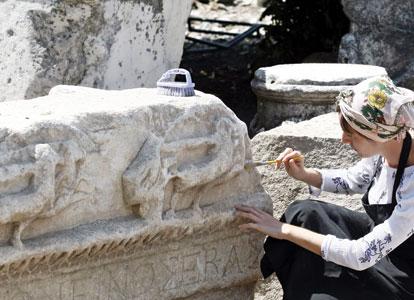 “We have found a block with a relief of a chariot race scene,” said Professor Bilal Söğüt, head of the excavation from Pamukkale University. “The chariot race scene provides us information on cultural and sporting activities. The chariot race relief also gives us considerable characteristic details of the carts and harness of that period.”

Ongoing excavations in the ancient city of Stratonikeia located in the Aegean province of Muğla are producing many interesting chariot race scenes. The city was established in the third century B.C., and later became part of ancient Greece and Rome.

An excavation team of 45 students and academics from seven universities, as well as 30 workers, found other blocks with reliefs of chariot race scenes in 2009.

“The one we found now and the former blocks must belong to different structures in size and location,” said Söğüt. “Chariot races organized in funeral ceremonies and sporting events were very important in the ancient period. We come across such figures on ceramics and structures often.”

“We also found new gladiator names in the recent excavations. We know that gladiators lived in this area and their graves are here,” he said. “A group of gladiators’ tombs are exhibited at the Muğla Museum. We believe Stratonikeia was an important area for gladiators. We believe we will find a structure where gladiators performed shows. But we don’t know yet where it is.”

Meanwhile, a research and development project team from the Education Ministry has also initiated a project called “Who Doesn’t Know the Past, Won’t Have a Future; So Teach Through History.”

“The project aims to introduce the environment to teachers and students and create historical consciousness,” Söğüt said, noting that the project had received funding of 49,550 euros as part of a learning program.

Excavations at Stratonikeia are continuing throughout the summer.