This month, the Journal of Human Evolution has published a short paper from Dominic Stratford and colleagues describing two hominin fossils from Milner Hall, a new excavation area within Sterkfontein Caves. One of the authors is my UW-Madison colleagues, Travis Pickering. If you know Sterkfontein, Milner Hall stretches from the area near the Silberberg Grotto across toward the underground lake.

The deposits sampled here are near the base of the fossil-bearing strata in Sterkfontein. Stratford, Grab and Pickering in a 2014 paper described the geological context of the excavation in Milner Hall. The excavation area includes at least three talus deposits that have sloped in from different sources, and have ages ranging from some of the oldest at Sterkfontein up to the last half million years. The hominin material comes from nearest the surface, in the T1 talus deposit. This talus was formed as miners early in the 20th century worked on a large stalactite nearby; this mining caused a relocation of a mixture of sediments from Member 5 and Member 2 into the T1 talus. According to the new paper describing the hominin material, the two hominin pieces most probably come from Member 5 sediments, which include some Oldowan flakes and a core. The age is uncertain. 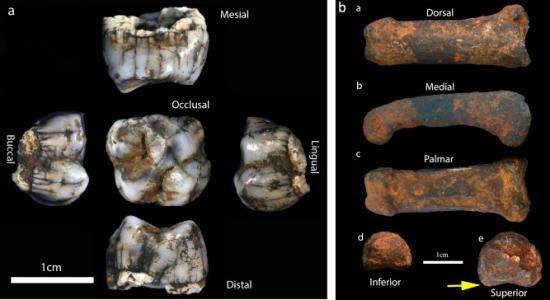 The tooth gives a bit more to compare:

StW 669, with its small occlusal area (116.5 mm2), tall vertical sides and widely spaced cusp apices, is grossly more similar to the M1s of Homo than to those ofAustralopithecus and Paranthropus. In overall shape and size, it compares most favorably to the Olduvai (Tanzania) M1 OH 6 (MD = 12.5 mm; BL = 12.3 mm) which is traditionally assigned to Homo habilis and to UW 101-1688, an M1 of the newly proposed South African species Homo naledi (MD = 12.4 mm; BL = 12.0 mm; Fig. 3a). In addition, like the majority of M1s traditionally assigned to earlyHomo (and especially to H. habilis, as well as to South African early Homo), StW 669 falls very near to the line of occlusal symmetry; in contrast, the vast majority of M1s of australopith-grade taxa (including Paranthropus) fall farther away and noticeably below this line.

Stratford and colleagues judge it to be a first molar, which is reasonable based on the cusp morphology. But the tooth lacks a distal interproximal facet, and I wonder if it may be a second molar instead. For some of these species (including H. naledi), the first and second molars can be hard to tell apart, without comparing a sample of them directly.

The tooth is small relative to most Australopithecus first molars, which means it is even smaller for a second molar of most species. But the size of the tooth does not distinguish species easily because are upper first molars attributed to Au. afarensis,Au. africanus, and even Au. robustus that have the same mesiodistal length as StW 669. These australopith species, however, have a broader buccolingual dimension than StW 669, which plots close to Homo first molars. The areas of the cusps are also more like Homo than Australopithecus, although the StW 669 paracone is yet smaller than the H. habilis examples. The two South African species that are most similar to this tooth are H. naledi and Au. sediba.

On the surface, the tooth looks like a very reasonable match for H. naledi first molars, and I think the match is even better for second molars. But it is not a bad match for the MH1 specimen of Au. sediba, either. We haven’t yet finished the analysis of cusp areas of the H. naledi molars, and on the basis of just this one tooth, I’m not sure we would be able to say StW 669 is very different from H. habilis, the KNM-ER 62000 specimen attributed to H. rudolfensis, or Dmanisi H. erectus.

But in the South African context, it seems like another example of a non-africanusspecimen at Sterkfontein. And both Au. sediba and H. naledi are so far known from only a single site each, so demonstrating that they were present at a second site might really help us to understand when and how long these species existed.