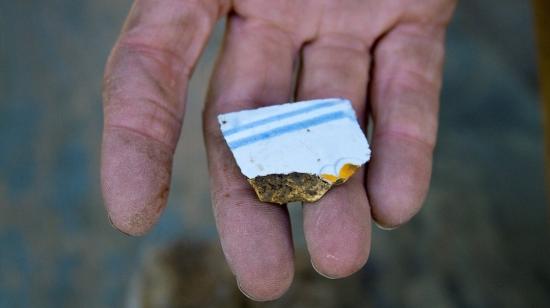 A piece of tin-enameled ceramic found at what archaeologists say is the site of a former French colony in St. Louis.Stephanie Zimmerman/St. Louis Public Radio

Archaeologists in St. Louis are ecstatic over what they say is an astonishing discovery in a most unlikely place.

Under a highway overpass just south of the city's famed arch, researchers have uncovered the first evidence of French settlement there 250 years ago. The findings will help shed new light on how settlers lived in the city back then.

"What we've uncovered is what appears to be a [wood] post-and-earth constructed house," says Michael Meyer, an archaeologist and the principal investigator with the Missouri Department of Transportation. "It's construction techniques commonly used by French Creole people during the colonial period – [the] late 18th century."

Meyer points toward a patch of dark dirt in a wide hole that's about five feet deep. This is the exact location of where some vertical wood posts formed the wall of a French house that was built around 1769.

There are two other visible layers in this hole, with concrete on top and brick in the middle – a construction method that Meyer says that's not surprising.

These archaeologists are here because MoDOT is planning major highway construction — and the National Historic Preservation Act requires an archaeological investigation before any work can begin.

Meyer goes to his truck and brings out one of the artifacts his team recently found. "This appears to be a tin-enameled ceramic — colonial period, possibly a polychrome majolica," he says. 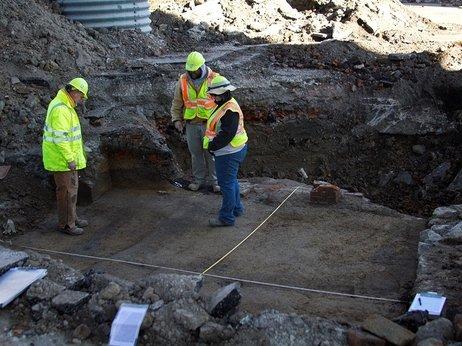 The piece was probably part of a bowl. It's white and has two blue stripes, and part of what looks to be a yellow floral design.

To be clear, people have lived in the St. Louis area for a long time. Just across the Mississippi River, in Illinois, is Cahokia Mounds – an ancient city of native North Americans. The settlement is thought to have been the largest city north of Mexico 900 years ago.

Meyer says finding evidence of St. Louis' European past is the most important work of his career, because much of old St. Louis is gone. In the 1930s, nearly 40 blocks where the French settlement once stood were leveled to make room for the Gateway Arch and a national park honoring Thomas Jefferson.

Fred Fausz teaches history at the University of Missouri-St. Louis, where he specializes in colonial America. He says the archaeological discovery is important because it confirms written evidence that St. Louis was a major commerce center and that many of its residents were well-off.

"It even tells us something new, in how far down the social scale these affluent products were showing up," Fausz says. "So someone who [lived] in a house that's only 15 feet by 18 feet nonetheless had access to pretty expensive French pottery, thanks to the international fur trade."

Back at the archaeological dig site, the importance of what's being found is not lost on Bob Moore, who's the National Park Service's historian for the Gateway Arch.

"I think everybody who's studied this over the years — from architectural historians to regular research historians like myself — have always felt that all the vestiges of colonial St. Louis are completely gone," he says.

Moore plans to display some of these artifacts in a museum exhibit below the Arch. And as St. Louis residents savor the year-long celebration of their city's founding 250 years ago, they now have something new to embrace.