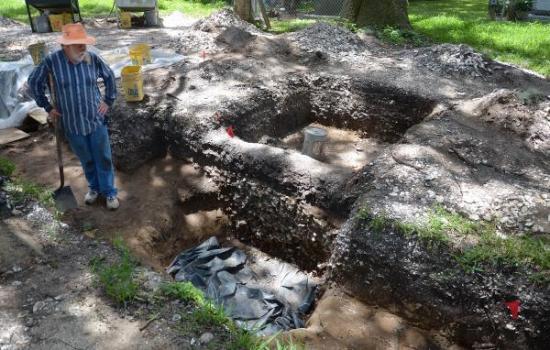 City archaeologist Carl Halbirt looks at an area of one of his digs off May Street on Thursday, where he believes he has uncovered a Timucuan Indian well that is more than 500 years old.  -  Peter Willott

An archaeological discovery made earlier this summer could show that indigenous people in the St. Augustine area once built and used wells before ever being exposed to European influence.

Local archaeologists previously assumed that the Timucuan indians, who settled in the area before the Spanish arrived, received fresh water from “seeps” in nearby embankments.

“We’ve never found an example like that, that predates the European settlement here,” city archaeologist Carl Halbirt said. “It gives us an idea of where the indigenous population possibly obtained their water.”

What appears to be a walk-in well was discovered on a property near the Francis and Mary Usina Bridge in June, as part of a city ordinance which requires certain properties to be investigated for archaeological deposits before construction.

Halbirt said the city has extracted more than a ton of shell, mostly oyster shell, and “tens of thousands” of animal bones, primarily from small fish.

“From that evidence, this is going to give us a really good idea of what their subsistence was like during that time period,” Halbirt said. “Most of the [bones are] fish, but we also have deer, turtle, water birds, and I think we have alligator.”

The goal now is to determine what the site’s primary and secondary purposes were. Since there were very few signs of European influence discovered there, Halbirt believes it was a Timucuan well.

That would make it the first well discovered in the area that was built before the arrival of the Spanish settlers.

“Here, because we have found no evidence of historic occupation other than a few olive jar shards, we can say this site is primarily prehistoric,” Halbirt said, defining prehistoric as any time before writing was invented, or before colonization in Florida’s case.

“Originally a source for potable water,” he said, “and later a convenient spot to toss their trash.”

The city will send the site’s discoveries to a lab for radiocarbon testing and will probably know within a month how old the structure is. Halbirt said he expects the range to be between 450 and 750 years ago, which would place it in the prehistoric time leading right to the arrival of the Spanish. After the city is done, the property will be backfilled for development, with some of the well left intact for future archaeologists.

“This is what makes it exciting is that you do have that potential for finding an aspect of prehistoric life that really no one expected,” Halbirt said. “Here we literally do have some type of something that we have never found before.”