A significant archaeological dig is underway at the Fountain of Youth in St. Augustine.

The rectangular holes in the ground are surrounded by firing cannons, tourists and re-enactors.

Under the tarps and in the holes is a crew led by Dr. Kathy Deagan, an archeologist with the University of Florida.

"We're trying to learn more and uncover more of the original settlement of St. Augustine of 1565," Deagan said.

"It was the first settlement in Florida by Pedro Menendez de Aviles and it lasted for about a year until the Native Americans drove out the Spaniards," she said.

She said it was believed that Menendez and the Spanish used existing structures here. With this latest dig, Deagan may have evidence to prove it.

She pointed to a group of artifacts still in the earth. There was part of an olive jar and a large shell, and Deagan noted how there were both Spanish and Native American items in that one spot.

Deagan also explained she found what appears to be evidence of a large circular building, based on post holes and discoloration of the soil.

In the area where they may have been a Native American circular building, she and her crew are finding quite a bit of Spanish artifacts which she says date back to the 1560's. They include tiny Spanish glass beads and chevron beads which may have been jewelry, trading beads or used for a rosary. The team has uncovered musket balls, and "big pieces of metal." The metal objects include what Deagan believes is a cross bow point, a belt loop and a button.

The artifacts are coming from an area that appears to have been burned.

Deagan pointed to a dark soil area with her trowel, "This dark soil with charcoal staining looks like burning." 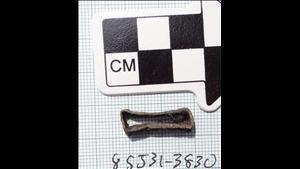 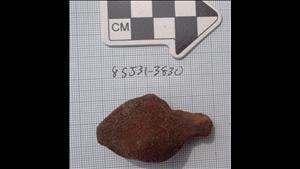 Deagan said that documents say the Timucuans drove away the Spanish from this area with fire.

"The storehouse of the Spanish was struck by flaming Indian arrows and there was a big fire," Deagan said. "Part of the building exploded because they had gunpowder stored there."

She continued, "We don't know if that's the exact thing we're seeing here [at the dig], but it could be."

Meanwhile, visitors to the Fountain of Youth often stop, peer into the holes in the ground, and ask Deagan and her crew questions.

"We get hundreds of people going by our dig every day," Deagan said.

For Deagan, these digs are a way to encourage interest in history. It's also a way to learn more about what was here 450 years ago, years before Jamestown was founded.