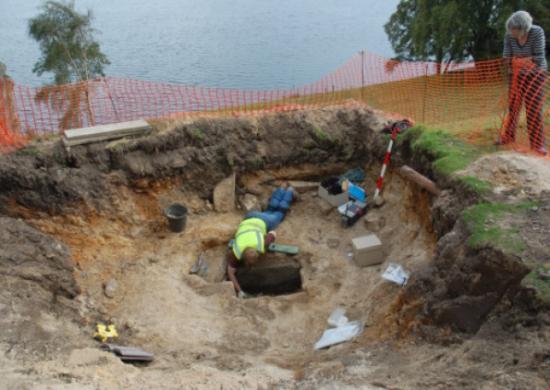 Archaeologists at the excavation site in Sutherland. Picture: Contributed

Fragments of the 4000 year-old sheepskin were discovered around the left arm bone of the skeleton of the middle aged female whose crouched body was contained within the burial cist.

It is the first time that sheepskin or wool has been discovered with Bronze Age remains anywhere in Scotland or Britain.

The remarkable discovery was made back in September, 2011, by a team of archaeologists at Glasgow-based Guard Archaeology in the back garden of Keas Cottage on the outskirts of Spinningdale, overlooking the mouth of the Dornoch Firth.

But details of the unique find have only now been publicly revealed following the official publication of the results of the dig in an archaeological journal.

The team, led by Iraia Arabaolaza, made the find after being commissioned to excavate and analyse the stone cist, built within a substantial pit, containing the remains of a women, believed to have been aged between 35 and 50, whose remains showed signs that she had been suffering from spinal joint disease.

She said: “The sheepskin discovered around the left arm of the body is the first sample of this kind in Scotland and is the first known example discovered from a Bronze Age burial in Britain. There have been two other samples of Bronze Age wool found in the British Isles, but no other examples of potential sheepskin are known.”

She continued: “Findings of hide or fur are few and far between in Britain but are often associated with ‘rich burials’ of adult inhumations.”

A spokesman for the archaeology company said: “ A tripartite food vessel urn, of Early Bronze Age date, was placed to the west of her skull, but what made this burial a particularly extraordinary site was the discovery of sheepskin and wool recovered from under the skeletal remains. The remains of the sheepskin may have been wrapped around the body.”

He added: “ A radiocarbon date of 2051-1911 BC and 2151-2018 BC was obtained from bone and charcoal fragments, placing the cist in the early Bronze Age period. The radiocarbon dating of the cist corresponds with the date of the food vessel urn buried with the body.

“The vessel contained carbonised material of non-botanical origin, unidentified cremated bone and a fragment of a small ring. These were probably placed there to assist the individual’s journey into the next world and indicate belief in the afterlife, which appears to have been a concept only adopted in Scotland.”

The report on the find states: “The small sample from Spinningdale is consistent with established knowledge of Bronze Age wool.”

It continues:: “There are two possible explanations for the significance of the grave goods found within the cist. The first is that they represent the individual and were part of her everyday life. The second interpretation is that they symbolize what the people that were burying them wanted to show to others witnessing the funerary rite.”

It adds: .”All the pathological manifestations encountered on the skeletal remains - degenerative joint disease and associated conditions - suggest an older individual with degenerative changes mostly concentrated on the lower lumbar spine. A possible congenital condition was also recorded on the sixth cervical vertebra where bony protuberances were identified on both sides of the vertebrae. None of these pathological conditions would have caused the death of the individual but they do indicate old age and/or a hard working life.”

The report concludes: “The Keas Cottage cist is an example of the complexity and diversity of early Bronze Age burials. The often accidental discoveries of prehistoric burials are increasing the numbers that can be added to the corpus and the general picture of the burial rites and people’s beliefs. The preservation of organic material, such as sheepskin or wool, also supports the view of a elaborate burial rites being carried out in the vicinity of the Dornoch Firth during the early Bronze Age.”