Archaeologists fear climate change could destroy preserved remains of the London, which blew up off Essex coast in 1665 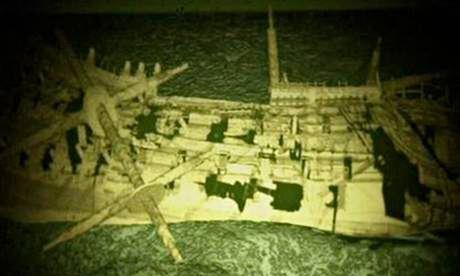 A CGI reconstruction of the London wreck. Photograph: Touch Productions

Archaeologists will embark on an emergency excavation of one of Britain's most important shipwrecks on Sunday after discovering it is deteriorating at alarming speed because of the warmer waters caused by climate change.

The once-mighty 17th-century vessel, named the London, has lain in the muddy silt of the Thames estuary off the Essex coast near Southend-on-Sea for 350 years.

Built in 1656, she was in a convoy that transported Charles II from the Netherlands to restore him to his throne after Oliver Cromwell's death in 1658. One of the most illustrious ships of her day, her remains are now a time capsule of the 17th century.

English Heritage, the government advisory body, has commissioned Cotswold Archaeology to carry out a major excavation.

A latchet shoe recovered from the wreck of the London by diver Steven Ellis, who said the Thames silt kept artefacts in good condition. Photograph: Steven Ellis

Mark Dunkley, a marine archaeologist at English Heritage, told the Guardian: "It's rare for wooden shipwrecks of this age and older to survive to this extent." The hundreds of surviving wrecks are mostly later iron and steel ships.

Asked why the wreck is deteriorating now after 350 years, he said: "Through human-induced climate change, warmer water is moving northwards. That's allowing the migration of warm-water invasive species." He spoke of the need for action to stop warm-water ship-boring organisms eating away at timber and organic artefacts and prevent loose objects being dispersed.

The London met her end in 1665 when she suffered a mysterious gunpowder explosion. More than 300 lives were lost in a tragedyrecorded by Samuel Pepys, the diarist and secretary to the Navy Board: "A little a' this side the buoy of the Nower [Nore], she suddenly blew up.

"About 24 [men] and a woman that were in the round-house and coach saved; the rest, being above 300, drowned: the ship breaking all in pieces, with 80 pieces of brass ordnance."

The diarist John Evelyn also lamented "the poor orphans and widows" left behind. 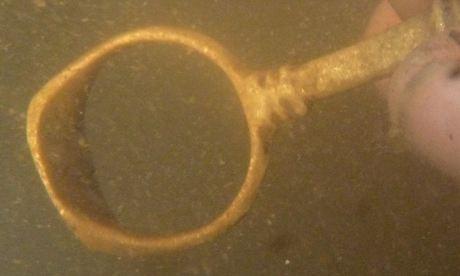 Initial finds include personal items such as this combined signet ring and pipe-tamper, as well as ship's fittings including cannonballs and an anchor cable. Photograph: Carol Ellis

The archaeologists are collaborating with Steven Ellis, a Thames estuary diver, who has been granted the government licence.

He too spoke of the need for action. During initial test dives, he spotted "loads of shoe soles". When he returned, they had been washed away, he said.

Ellis did, however, find a complete shoe that looked astonishingly modern, in superb condition considering its age. He said: "The Thames has got so much silt. That's why everything is in such good nick."

His other initial finds included personal items such as a bronze signet ring and clay pipes, as well as navigational dividers, buckets, pots and cooking utensils. He retrieved ship's fixtures and fittings such as door latches, an anchor cable and cannonballs.

The excavation will be complex. Though the wreck is only up to 18 metres deep, visibility is poor. Ellis said: "On a good day, you've got perhaps half a metre."

There are also strong currents and the site is at the edge of a shipping lane. "It makes it a little more hairy than most dives," he said. 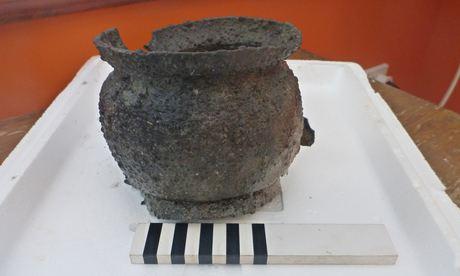 A pewter pot recovered from the London. Archaeologists say warm-water organisms, brought north by climate change, will eat away at the wreck. Photograph: Steven Ellis

The London's final resting place was only confirmed in 2005. She is one of only 49 ships protected under the Protection of Wrecks Act in England, an indication of her importance.

Dunkley said: "Part of the excitement for us, as archaeologists, is to share with those people that can't access the London with a scuba tank."

The wreck offers insights into the navy when England was emerging as a global power, he added. "It allows us to share our understanding of how people lived, fought and died on this class of ship. The London fills a gap in our understanding of ship technology and ship construction."

The vessel was fitted for war when she blew up. The women on board were possibly officers' relatives. Perhaps they would have disembarked as the ship would have been fully prepared for war, Dunkley suggests. "Pepys talks of ladies being on board. We don't know whether they were guests masquerading as crew members, which happened in Admiral Nelson's time. Or whether they were guests of the lower decks."

Although she blew up, the ship seems to be pretty complete, lying in two sections. She was once 37 metres long by 12 metres wide.

Divers will excavate the bow, the hold, the main gun deck and the carpenter's and boatswain's storerooms. Finds recovered from the site will be curated, published and displayed by Southend Museums Service.