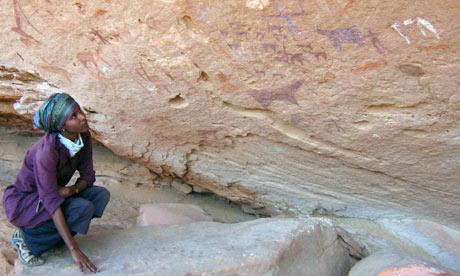 Striking prehistoric rock art created up to 5,000 years ago has been discovered in eastern Africa by a UK-based team of scientists.

A team headed by Dr Sada Mire – an archaeologist at the institute of archaeology at University College London (UCL) – made the finds at almost 100 sites in Somaliland on the Gulf of Aden.

Leaping antelopes, prancing giraffes and snakes poised to strike are among animals and reptiles depicted with astonishing clarity in the ancient paintings.

The images include a man on horseback, painted around 4,000 years ago – one of the earliest known depictions of a mounted hunter.

Such is the quality of the paintings that at least 10 of the sites are likely to be given World Heritage status.

Mire's research study will be published this month in the journal Current World Archaeology.

The archaeologist, who has just become a UN consultant for Somaliland, told the Guardian: "These are among the best prehistoric paintings in the world. Yet Somaliland is a country whose history is totally hidden.

"With wars, droughts and piracy in Somalia, hardly anyone has researched the archaeology until now. But it's absolutely full of extraordinarily well-preserved rock art."

One of the sites – Dhambalin, mountainous sand dunes located about 40 miles from the Red Sea – features pictures of horned cattle, sheep and goats, painted about 5,000 years ago. The animals have distinctive bands around their backs and bellies, which suggests farming or ritual traditions.

There are also animals such as giraffes that are no longer found in Somaliland.

Mire, who is Somali-born, has been particularly struck by ancient paintings of "eerie headless creatures".

She said: "Sometimes the cattle are represented as simply necks or horns, a pictorial shorthand that was evidently still sufficient to convey meaning to its audience."

Other paintings are more mysterious – like the 2,000-year-old colourful images of the full moon, half-moon and geometric signs at another site, Dawa'aleh.

Mire believes these depict the ancient artists' view of the world, time and space.

The sites are scattered across semi-desert terrain in Somaliland. The country is in the northern part of Somalia, and covers an area slightly larger than England – but with a population of just 3.5 million. More than half of these people are nomads.

Once part of the Ottoman empire, it was a British colony from 1884 until 1960. After gaining independence, Somaliland merged with Italian Somaliland, an Italian colony until 1941, to create modern Somalia.

Although Somaliland declared itself independent of Somalia in 1991, and has a separate government, it is yet to be recognised as a separate state.

Mire said: "Whereas Somalia has suffered with an ongoing civil war and piracy, Somaliland has remained peaceful. It does not have piracy.

"Yet, despite boasting a stable, grassroots democracy, the country has not been recognised by the UN and so does not formally exist, leaving it a breakaway state teetering on the edge of a violent region.

"However, its heritage puts it firmly on the archaeological world map. Few people, either inside or outside Somaliland, are aware of the riches it contains."

The latest discoveries are a sequel to the impressive cave paintings found at Laas Geel in 2000. For centuries, these were known only to nomads, who believed the site was haunted by evil spirits.

"This superstition had the fortunate side effect of preventing their livestock from damaging the fragile murals," Mire said. She believes that many more sites are yet to be found.