Solving a Dark Age mystery: 7th century Christians, Pagans and the search for the Battle of Hatfield

Paul Jameson, of the Battle of Hatfield Investigation Society, on the bid to tell the story of England’s first Christian king and early Pagan rituals 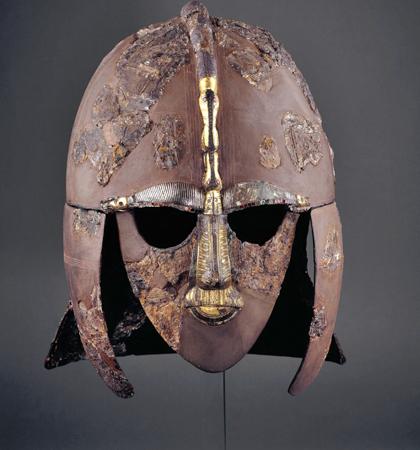 Historians believe the reconstructed helmet, famously found at Sutton Hoo, may have belonged to Rædwald of East Anglia - a 7th century king© Trustees of the British Museum
“The England of 632AD was one where regional kings jostled for power. It was a time of shifting, uneasy alliances ,convenient marriages and treachery amongst distant or even close relatives. It was a world embarking upon a division into those following a more enlightened Christian doctrine versus the still dominant force of Paganism.

Some, such as King Edwin’s supposed foster brother, King Cadwallon of Gwynedd  - one of his two foes, with Prince Penda of Mercia at the Battle of Hatfield - would profess to being Christian but were in practice more brutal than most adherents to Paganism. Penda was an avowed Pagan.

While all kings required special qualities, these could range from the use of brutality as a compelling force to a more enlightened  approach. This would, however, be tempered by an implied threat of retribution to those perceived to be challenging that arbitrary authority.

The practicalities of maintaining any regional Kingship meant that other regions would constantly need to be invaded so that the spoils of war could be used to pay for an army’s upkeep and hence ironically also the defence of the realm.

Although “just wars” were fought, the majority were necessary economically driven invasions of other territories, where “just” sometimes merely referred to the way the vanquished were treated by the victors. Edwin was also party to such behaviours, annexing kingdoms Elmet and Lindsey and also laying siege to Cadwallon, off Anglesey, which may help explain his later motivation.

“Laws” were regional decrees initiated and implemented by Kings and were not necessarily applied fairly.

Life meant either the struggle of the strong against the weak or of superficially respectful alliances based upon the fear of mutual harm.

In such fluid circumstances, Edwin ascended to the throne in Northumbria in 616 AD via the patronage of his protector , King Raedwald of East Anglia after defeating the previous King, Aethelfrith at the Battle of the River Idle.

Born in 586 AD, Edwin was the son of King Aelle of Deira. It is unclear if Edwin was first in line to the throne, but Aethelric  assumed the kingship and it may be that he handed this to Aethelfrith - possibly his son - by 604 AD. By then, both provinces had been united as Northumbria.

For reasons unexplained, Aethelfrith was intent on murdering Edwin, who was exiled immediately possibly firstly in Gwynedd, under Cadwallon’s father, and also in Mercia under King Cearl. Finally, by the early 610s AD, he was sheltered by the powerful King Raedwald in East Anglia.

The Bede of Jarrow reported a series of mystical events associated with Edwin which laid the base for his posthumous sainthood ,  allied to Edwin as King having a reputation for Law and Order and general civic improvements.

Firstly, Aethelfrith  bribed and then threatened Radewald into giving up Edwin to him, but due to divine prompting, Raedwald’s wife gained the conviction to persuade him that it was not honourable.

Raedwald immediately raised a great army and slew Aethelfrith at the Battle of the River Idle in 616 AD. As Raedwald’s son , Raegenhere also died, Edwin became a surrogate son and succeeded immediately to the Northumbrian throne, initially under Raedwald’s patronage.

A further practical inducement towards his adoption of Christianity was that his intended bride, Ethelberga of Kent, was a Christian and that her father only accepted on the condition that she could continue to practice Christianity without interference. Edwin also promised to consider adopting their faith.

In about 626 AD an assassin called Eumer was sent from King Cuichelm of Wessex in the guise of a messenger.

While delivering his speech, he suddenly drew a poisoned knife, but one of Edwin’s bodyguards, Lilla, threw himself in the way, dying in the process. Eumer managed to kill another protector and wounded Edwin before being dispatched.

That same evening, Edwin’s wife gave safe birth to their daughter, Eanfled. Upon recovery from the attack, Edwin gathered his army and defeated and killed Cuichelm.

Then as an intermediate step to possible conversion, Edwin also asked for and received, “a full course of instruction in the faith from the venerable Paulus” (Bede).

All of these events probably softened Edwin’s stance towards Christianity, but it was a pragmatic rather than a Damascene conversion which took place the next year (627 AD).

However, the conversion did not happen without Edwin holding a council of his chief advisors including his Pagan High Priest, Coifi, whose opinion was that he thought Paganism was,”valueless and pointless”.

Hence Edwin measuredly accepted the faith and was baptised in the same year on the 12th April (Easter Day) at York.

Somewhat ironically, Edwin soon developed a fervour for Christianity that saw all the nobility and a large number of, “humbler folk” (Bede) accept the faith. Edwin also persuaded King Earpwald (son of his protector, Raedwald) of East Anglia to accept the faith.

All of this evidence paints a picture of Edwin as thoughtful, practical, fair and dedicated to stability via the rigour of law.

In sharp contrast, his opponents at the Battle of Hatfield comprised the Pagan Prince Penda of Mercia and the nominally Christian but utterly barbarous Cadwallon of Gwynedd who would jointly go on to ransack Northumbria with the latter “not sparing women and children, putting them all to horrible deaths with ruthless savagery”, according to the Bede.

Frustratingly little is known about the Battle of Hatfield. The first writings about the battle were by Bede in around 731AD – 99 years and possibly at least two generations later in those times.

It probably took place on October 12 632AD at a place called, “Haethfelth”, which merely means heath field, also referred to as Hatfield. There are still many of these in the country including Hatfield Chase near Doncaster and High Hatfield near Cuckney, Nottinghamshire.

In an age of dense forestation (that lasted right up to the early 19th Century), the open land afforded by heath would represent an ideal clearing for a large conflict.

The Hatfield near Cuckney is the only one supported by hard evidence, as more than 200 bodies were discovered under St Mary’s Church in Cuckney in 1951.

The issue of who chose the battle site is unclear, but in an age of poor communication it would seem probable that one of the sides would issue a challenge to the other and that Cuckney represented good neutral ground.

In his 1975 article, “King Edwin and The Battle of Heathfield”, Stanley Revill surmises that the lack of road choices would have meant that Derby was a natural meeting point of roads from North Wales and southern Mercia. Thereafter a rapid joint advance would have been possible via Ryknield Street to Chesterfield.

Edwin’s lookouts may have been fooled by the clever practice of both Cadwallon and Penda’s forces following in a single line of approach.

If the weight of unexpected numbers caused Edwin’s forces to relinquish the high ground , then equidistant between Cuckney Hill, at its A60 bisection point and High Hatfield is a direct, obvious , downwards route to where Cuckney Church is today.

In addition, the road and the bridge that links Norton to Cuckney today would not have existed, meaning that the River Poulter would have stopped any escape in that direction as well as to the north.

As Edwin’s troops were fleeing from the south this would have left only a small possible escape route, meaning that it would be easy to block.

This would have left Edwin’s routed forces mainly encircled by the River Poulter, in the marshy land represented today by the meadow below the Church perimeter.

Since this may have put Edwin’s remnants in a weak position, then the composition of the 800 bodies are likely to have included more of Edwin’s men.

It is also worth considering that the bodies might represent only those fighting and dying in that tight enclave.

The burial site may merely have represented the first land that was suitable after the marshy area, as it would not be practical to transport larger numbers of dead, heavy bodies very far.

Legend has it that Edwin’s body was transported by some escaping elements of his forces eastwards - probably the only direction left away from the line of the battle - for a few miles to what became known as Edwinstowe. His head was then taken and buried in the church of St Peter at York.

Yet it may not have been possible to rescue Edwin’s body if he had been trapped in the area around what now contains the church. When the same Penda killed King Oswald of Northumbria at the Battle of Maserfield, nine years later, in 641 AD, his captured body was dismembered, his head and limbs being placed on stakes.

One of the tasks of the Battle of Hatfield Investigation Society will be to carry out research on Pagan rituals in respect of their treatment of the bodies - especially the spoiling of the heads - of their foes.

The Society represents the best chance of providing answers since 1951 and probably for a long time hence. So with the purest of motives we hope to solve the mystery and a portion of English history from the Dark Ages.”