Sogndalsdalen (Norvège): A viking blacksmith buried with his tools

More than a thousand years ago a blacksmith died. His tools were buried with him. Now they give us insight into the work and status of a blacksmith in the viking society 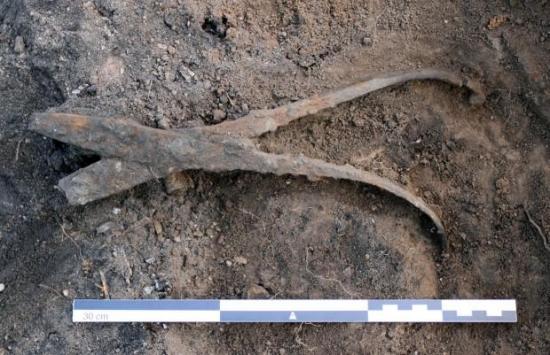 This was one of the tools found in the blacksmith's grave. The archeologists think his contemporaries wanted to show how talented and versatile the blacksmith was in his craft. (Photo: Howell Roberts, University Museum of Bergen)

A well-stocked grave of a blacksmith from the Viking Age is one of the best finds in Norway last year, according to Norwegian archeologists.

Leif Arne Nordheim, who lives in Sogndalsdalen on Norway’s west coast, decided to do something about some flagstones in his garden that irritatingly refused to lie flat. When he removed the stones he caught sight of something made of iron. 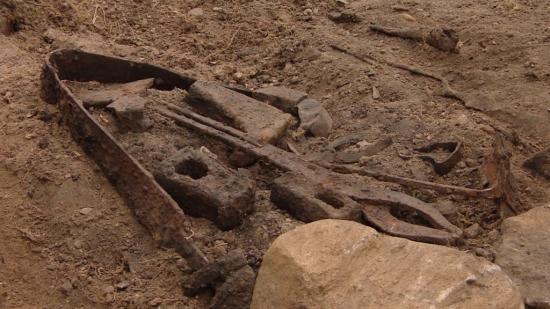 The weapons and tools from the grave

Brushing some of the objects off, he recognised them as a blacksmith’s hammer and tongs.

Nordheim contacted the regional culture authorities but had not dreamed that the artefacts dated back to the early Viking Age.

Archaeologist from the University Museum of Bergen were summoned, including Asle Bruen Olsen.

“It turned out to be a fantastic discovery and one of the richest graves investigated in the past years in this area,” says Olsen.

Was buried with his tools

The grave was composed of several layers. According to the archaeologist the placement of the objects signifies their relative status.

At the top they found the blacksmith tools. The archaeologists also found an axe and sword and some agricultural implements. Deeper down were the blacksmith’s personal items, including a razor, a scissors for trimming his beard, tweezers, a frying pan and a poker. The grave contained about 60 artefacts.

At the very bottom they found the cremated remains of a human – the blacksmith. Mixed in with these were more personal items – some beads that had been attached to his clothing and a comb made of bone.

Olsen says that the blacksmith tools definitely define this Viking’s line of work. 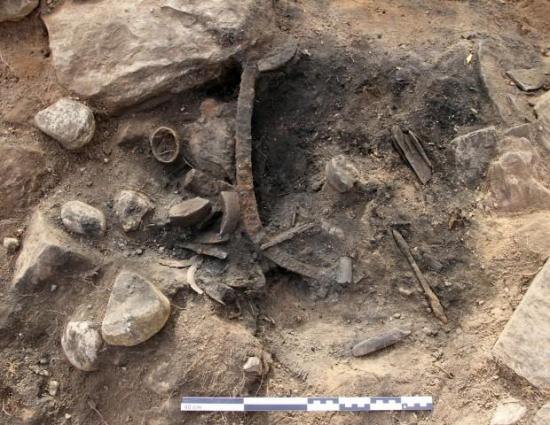 Also personal items were found in the grave. Here we can see a razor, a scissors for trimming beard, tweezers and a frying pan. (Photo: Howell Roberts, University Museum of Bergen)

“We think that the blacksmiths’ contemporaries wished to show how skilful he was in his work by including such an extensive amount of objects. He might have forged many of these tools himself.”

“The grave gives the impression that this was a local blacksmith and he enjoyed a high status in his society beyond being his trade,” says Olsen.