A luxury residence dating back about 2,000 years to the Roman era has been discovered in the Aegean province of İzmir. Located in the ancient city of Smyrna, the 400-square-meter residence has many rooms, including a bathroom and kitchen. 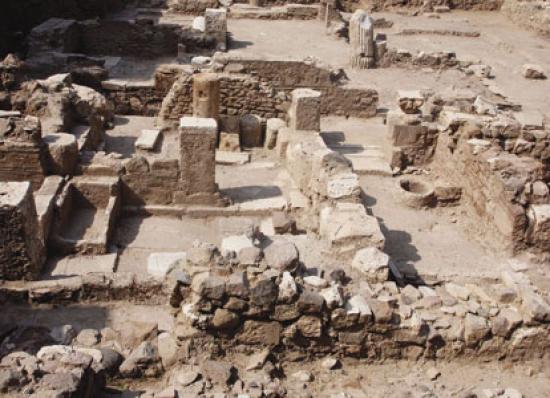 “The presence of numerous rooms, a bathroom and kitchen show us that a rich family must have lived here together with slaves. We see many details of their lifestyle from the remains found during excavations,” said archaeologist Akın Ersoy, who leads the excavation works.

The finding was made in the framework of excavations in the ancient city of Smyrna made by Dokuz Eylül University in cooperation with Turkey’s Culture and Tourism Ministry. It is the first time that a residence has been found in the central part of the city since excavation started three years ago, said Ersoy.

The residence, thought to be a two-story structure, has numerous rooms around an internal garden, Ersoy said, adding that the restroom and the kitchen had first been constructed as one, but were then detached by a wall constructed in between. “We found various pots and plates in the kitchen.”

Many findings regarding Roman culture have been discovered during the excavations, Ersoy said.

A Roman Road has also been discovered during the excavations, and the luxurious residence is located just by the side of this road, Ersoy said, adding that it was the first time they had encountered a Roman road. He said they had uncovered a 50-meter section.

“The fact that the residence was built alongside this historical road, and that it contains a kitchen and a restroom, which is not common for houses of that period, indicate that the house was owned by a rich family,” Ersoy said, adding that it was likely that slaves also lived in the residence. “We think four or five slaves used to sleep in the same place.”

Ersoy said they had found small accessories in the area, such as earrings, bracelets and oil lamps. The objects will be given to the İzmir Archaeology Museum.