Smederevska Palanka (Serbie): Could this be the world's oldest pocket calendar?

Engraved tusk would have told farmers when to harvest crops up to 8,000 years ago

It may look like a banana, but this curved device is actually thought to be the world's oldest pocket calendar.

Archaeologists found the calendar in Serbia and believe the moon-shaped device is around 8,000 years old.

It is made from the tusk of a wild boar and is marked with engravings thought to denote a lunar cycle of 28 days, as well as the four phases of the moon. 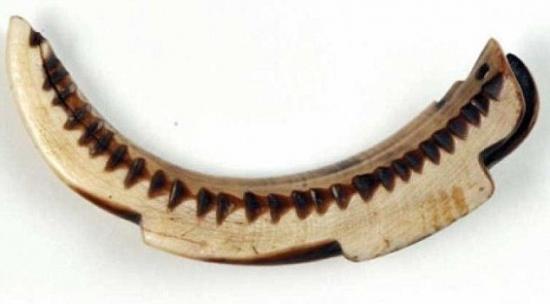 Archaeologists discovered what's thought to be a Neolithic moon-shaped calendar in eastern Serbia, pictured. It is made from the tusk of a wild boar, is thought to date back around 8,000 years and is marked with engravings that denote the lunar cycle.

The archaeologists believe ancient man would have used it to work out the best time to plant and harvest crops.

The tusk was found in an area close to the town of Smederevska Palanka in eastern Serbia.
Professor Milorad Stojic from the Archaeology Institute in Belgrade, who made the discovery said: ‘We believe the engraved tusk represents a moon calendar.’

‘There are 28 miniature triangular indentations carved there.

‘It fits into a pouch or a small bag so, yes, it can be said that this is probably the world's first pocket calculator.’ 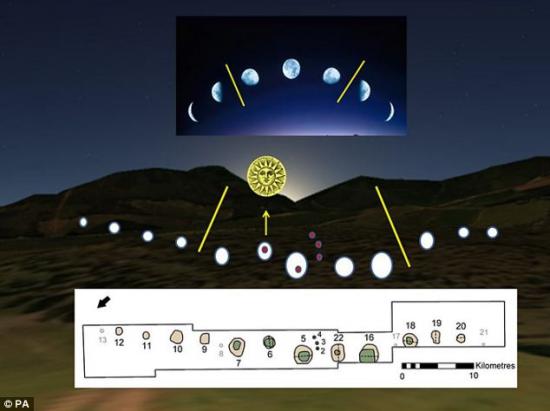 A group of 12 pits recently excavated in Aberdeenshire appear to mimic the phases of the moon to track lunar months over the course of a year. Researchers from the University of Birmingham now believe this monument could be the world's oldest 'calendar' and dates back 10,000 years
Professor Stojic said the area where the tusk was discovered represents one of Europe's most interesting archaeological sites from the Neolithic period and was a centre of religion 6,000 years ago.

Aside from farmers using the calendar for crops, Stojic added it could have also been used for family planning.

‘Lunar calendars were used since Palaeolithic and Neolithic times,’ explained the professor. ‘But never before have [archaeologists] found such a good example like this tusk in Smederevska Planka.’

Although the device is believed to be the oldest pocket calendar, it is not the oldest calendar in the world.
In July, archaeologists in Scotland discovered what they claimed was a 10,000-year-old date organiser.

A group of 12 pits excavated in Aberdeenshire apperared to mimic and align with the phases of the moon, making it possible to track lunar months over the course of a year.

The first formal time-measuring devices were thought to have been created in Mesopotamia about 5,000 years ago.

The pit alignment near Crathes Castle predates those discoveries by thousands of years, experts said.

The Mesolithic monument at Warren Field is said to have been created by hunter-gatherer societies ten centuries ago.