Source - http://www.pasthorizonspr.com/index.php/archives/04/2015/excavating-the-cromlech-tumulus-on-slievemore-the-story-so-far
Last year (2014), Achill Archaeological Field School detailed the background to an exciting excavationthat was about to begin on Slievemore Mountain, on Achill, the largest island in Ireland, located off the north west coast of County Mayo. 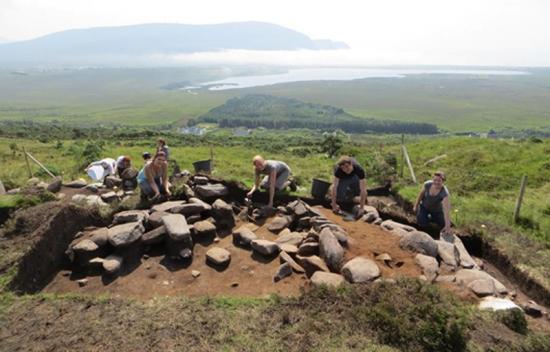 The site was first noted on the 1838 edition of the Ordnance Survey map where the labels ‘Cromlech’ and ‘Tumulus’ are used, apparently relating to two separate but adjacent sites a little to the west of a well known Neolithic court tomb. On later editions of the Ordnance Survey map and in most subsequent discussions the two terms are conflated and used to describe all of the visible archaeology in that location. Serious archaeological discussion of the site began in the 1890’s when Col. W.G. Wood Martin described the various elements as a ‘sepulchral complex’. Subsequent opinions have been divided over how the site should be categorised. 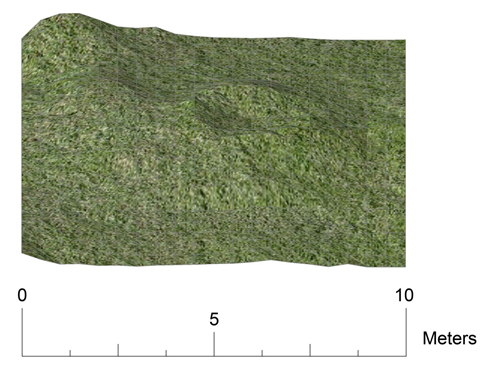 Topographic survey of the western half of the site, clearly showing the apparent circular mound with the distinctive central hollow. Part of the bank of the enclosure can be seen towards the rear at the left. Image: Achill Archaeological Field School

A number of archaeologists have regarded the eastern part of the site as a partially concealed and collapsed megalithic tomb, identifying the visible stone structures with the ‘Cromlech’ part of the site name, and the circular mound with its central hollow at the western end of the site as either a secondary burial mound or a later building, equating this with the ‘Tumulus’ part of the site name. Conversely other archaeologists have regarded the site with far less enthusiasm, viewing it as either a series of collapsed early medieval huts or as a post medieval agricultural building. It is currently listed in the Mayo Sites and Monuments Record as a possible megalithic structure.

During the summer of 2014, Achill Archaeological Field School began a two year project to survey and partially excavate the site, hoping to finally determine the date and function of the ‘Cromlech Tumulus’ as part of the ongoing research program investigating the archaeology of Slievemore from the earliest times up until the present day. A detailed GPS survey was followed by a high-resolution topographic survey, confirming the general layout of the site as recorded by Piggott and Powell in the 1950’s. The excavations in 2014 focused on the western half of the site, with the aim of examining the ‘tumulus’ part of the site. 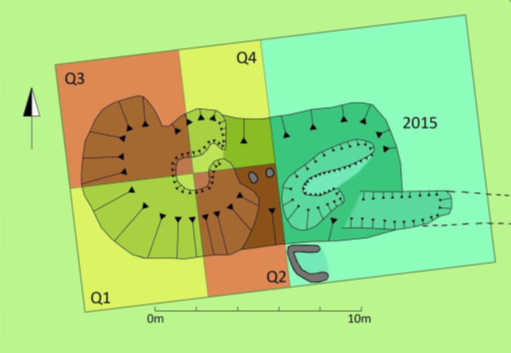 GPS survey of the ‘Cromlech Tumulus showing the areas excavated in 2014 and the area to be investigated this year. Image: Achill Archaeological Field School

Once the overlying peat was removed the archaeological deposits were found to be very well preserved but quite different in nature to that which had been proposed by previous researchers. What had appeared to be a small and neatly delineated circular mound or building turned out to be one side of a large enclosure. Whilst the full course of the enclosure hasn’t yet been established it is estimated to measure at least 15m by 20m. The enclosure is defined by two concentric bands of stone walling in-filled with charcoal rich soil. The charcoal rich soil appears to be reused Midden material, although this awaits proper confirmation. An entrance to the enclosure was located along its southern edge marked by two prominent orthostats.

A series of overlying hearths

The pair of orthostats that mark the entrance into the enclosure had been reused at some point in time as the entrance to an oval building. This secondary structure was defined by a rather slight stone and turf wall partially overlying the southern wall of the enclosure and extending into its interior. The age of this building isn’t currently known although the enclosure itself had been partially in-filled with soil before the building was constructed. Fortunately the oval building contained a series of overlying hearths which have provided material suitable for radiocarbon dating. After this building had gone out of use it was replaced by an even smaller circular building, defined by a simple turf bank. It was this final building that gave this part of the site the appearance of being a circular mound with a central hollow. 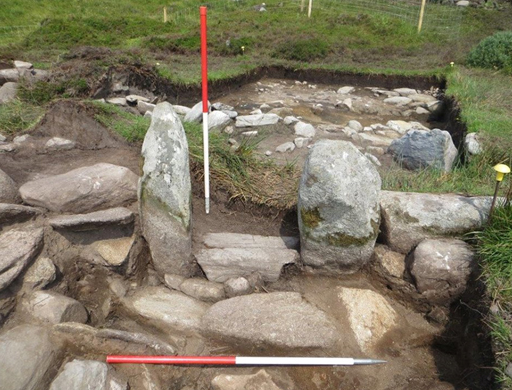 Close up of the pair of orthostats that formed the original entrance into the enclosure and which were reused as the entrance to the oval building. Image: Achill Archaeological Field School

As mentioned above the enclosure became in-filled with soil before the later buildings were constructed. Removal of this soil layer within the enclosure revealed a fascinating series of pits and post holes that seem to be part of the primary period of activity within the enclosure. The pits and postholes are so closely spaced that it is doubtful that they could all have been used simultaneously, suggesting activity within the enclosure took place over an extended period of time. So far the pattern of postholes does not create the convincing outline of a structure, but their depth and diameter suggests that quite substantial timbers were being used. It is hoped that when more of the interior is examined during the 2015 season more postholes will be revealed and perhaps a recognisable ground plan will become apparent.

The pits within the enclosure were among the most interesting features discovered during the 2014 season. One of the larger examples was a rectangular pit lined with stone slabs which had been deliberately in-filled with large stones. An adjacent pit was almost perfectly circular in plan and had vertical sides and a flat base. The bottom of the pit was covered by a single flat slab of stone that which fitted into the circular pit quite precisely. A far larger pit was partially investigated at the eastern edge of the excavation. This pit was several metres across and had been back filled with a random assortment of very large stones and boulders. The function of these pits is unclear at present, due to a lack of artefacts, but fortunately environmental samples were recovered from many of them and it is hoped that analysis of these samples will provide information about their dates and purposes. 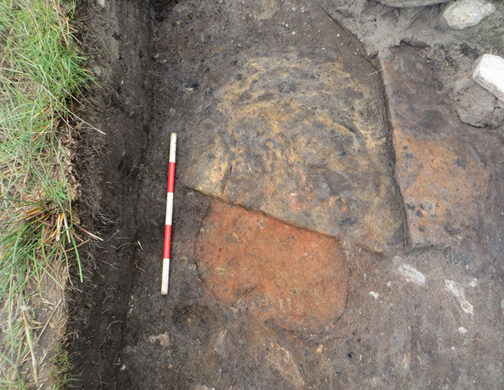 The three successive hearths within the centre of the oval building. Image: Achill Archaeological Field School

During the 2015 season work at the site will concentrate on completing the investigations of the interior of the enclosure and examining the various stone structures that make up the ‘Cromlech’ part of the site. At this point it is not clear if any of these stone elements will indeed turn out to be part of a megalithic structure or if they represent a different type of archaeology.

The enclosure is already a very exciting discovery, and whilst its date is not yet known, it is possible that it could be associated with a large number of prehistoric enclosures found elsewhere in County Mayo. Many of the other Mayo enclosures have been surveyed in some detail but only two examples have previously been the subject of detailed excavation, the examples at Glenulra and Belderrig. Both of those enclosure sites lie within the famous Neolithic field systems along the north Mayo coast and represent Neolithic settlement sites embedded in landscapes of stone field walls and Megalithic tombs. Slievemore has abundant pre bog field walls, one of which connects to the eastern end of the site, and a number of Megalithic tombs are located within the area around it, so a similar interpretation is a distinct possibility. However as yet the excavations have not provided any dateable artefacts and a Bronze Age or later date remains possible. The first batch of radiocarbon dates from the site should be returned during the summer of 2015 and we eagerly await these results. Whatever the outcome of the dating process the excavations have already added a new and exciting element to the remarkable story of the archaeology of Slievemore.