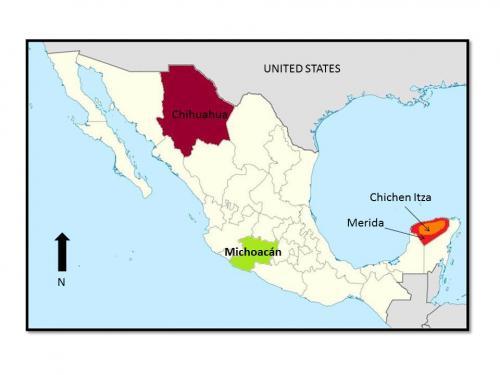 A new analysis of the skulls of prehistoric peoples in Mexico reveals significant regional variation in the facial characteristics of indigenous populations – indicating that there were notable physical differences between geographically separate groups before the arrival of Europeans.

"There has long been a school of thought that there was little physical variation prior to European contact," says Ann Ross, a forensic anthropologist at NC State who co-authored a paper on the work. "But we've found that there were clear differences between indigenous peoples before Europeans or Africans arrived in what is now Mexico."

The research team looked at skulls dating from A.D. 1 through the late 15th century. The researchers assessed facial landmarks, such as the cheekbones, the bones surrounding the eyes and the bridge of the nose. For purposes of comparison, the researchers also examined skulls of Spanish, African American and Mayan origin, dating to after Europeans arrived in Mexico.

After evaluating the skulls, the researchers ran statistical analyses of the facial landmarks. The results of those analyses allowed them to compute something called the Mahalanobis distance, which allowed them to measure the overall difference between the population groups. This assessment showed a clear separation between populations in different parts of pre-Columbian Mexico.

"This makes it clear that there was no clear, overarching phenotype for indigenous populations," says Ashley Humphries, a Ph.D. student at the University of South Florida (USF) and lead author of the paper. "All native peoples did not look alike."

The paper, "A Geometric Morphometric Study of Regional Craniofacial Variation in Mexico," was published online Sept. 4 in the International Journal of Osteoarchaeology. Co-authors include Ashley Maxwell, also a Ph.D. student at USF and Douglas Ubelaker of the National Museum of Natural History. Humphries and Maxwell both worked with Ross while master's students at NC State.