Skaun (Norvège): The mystery of a deeply gouged Viking shield

This gouge may be the result of a successful parry. The viking who owned the shield was on a journey, probably to Eastern Europe. 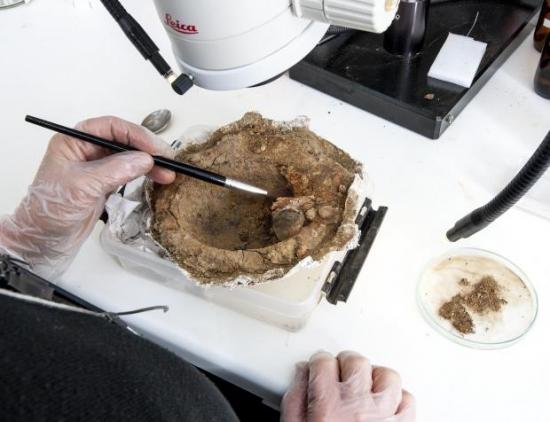 Viking shield bosses were made of rounded metal and placed in the middle of the shield. The rest of the shield was made mainly of wood. The cupped metal bulge covered the handle and provided additional protection there. This particular boss has a depression in it that could indicate an axe or sword strike.

The shield might have joined a Viking in battle. The guy who owned it probably lived a more colourful life than most of us.

“The gouge indicates that the shield owner was on a trip,” says archaeologist and field supervisor Ragnar Vennatrø. This guy either travelled to Eastern Europe, or he sent someone there.

The shield remnants are part of a burial ground from the Viking Age that are now being analysed at NTNU’s University Museum. Archaeologist Ingrid Ystgaard is heading up this work.

The discovery attracted attention in the media last year, primarily because of a sword that was uncovered in the same place. But only now are scientists able to piece together the whole story. The archaeologists are uncovering more Viking secrets.

He was found in August 2014, in Skaun in Sør-Trondelag county. He had lain in his grave since the second half of the 900s CE. Or so it was thought, until now. 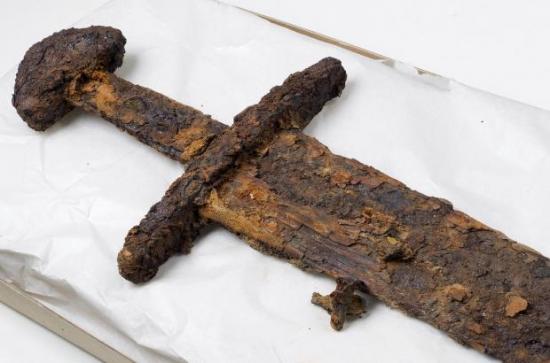 A sword was uncovered in the same place as the shield. (Photo: Åge Hojem / NTNU University Museum)

There is very little evidence of this Viking man himself. Perhaps only a small, burnt piece of bone.

But his sword, an axe, a measuring weight, some valuable items he was carrying, and the shield boss show that this individual had a certain status.

The discovery is also unusual because it gives a more complete picture of the person. Scientists believe this find is a gravesite, and the artefacts show the Vikings both as combatants and as participants in a civilized economy, where women generally ran the farms and everyday life while the men were out and about.

Inside the cupped boss, archaeologists found what may be the remains of a leather bag, tucked into what was probably the shield handle. The remains of the bag included 11 polished round stones. Along with these, one and a half Arab Kufic coins were found. These inscribed silver coins came from Kufa in present-day Iraq. This Viking may not have travelled all this way himself, but he at least had contact with someone who did.

It is not uncommon to find parts of coins. The weight of the silver was what counted, and if you needed change, you just cut off a bit of a coin. The measuring weight found in the shield boss may show that transactions were carefully calculated.

The story is revealed when you see all the parts of the discovery in context, but the sword is what that fascinates people the most. 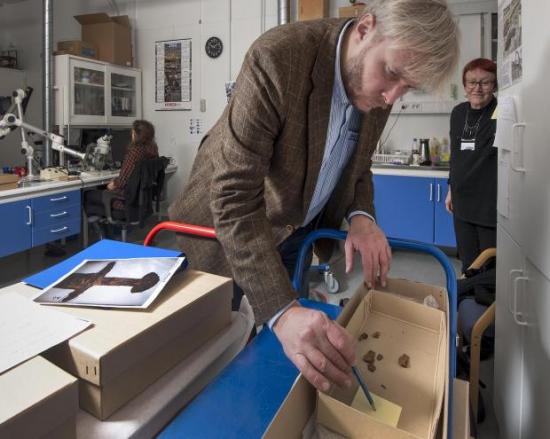 Vennatrø and Airola are among those who have examined the Viking finds. (Photo: Åge Hojem, NTNU University Museum)

“This is a ‘no-nonsense sword’,” says Vennatrø, as he shows off the full-length weapon.

This sword was not made for ceremonial use or decoration. It was designed for everyday use, whatever that might mean in this context. The sword was most likely composed of parts from various places, but the blade’s inscription has not yet been fully deciphered. It may say “Ulfberht,” and if so, the blade may originate from somewhere in present-day Germany.

Leena Aulikki Airola, the NTNU University Museum curator, has painstakingly revealed the discovery’s secrets, one by one.

“We found organic remains of the scabbard,” said Airola, who has spent many hours on this project. The wooden sheath was lined with fur. A layer of cloth and leather covered the outer wood.

Some fabric remnants still exist, particularly at the mouth of the scabbard, as do a few pieces of leather. Archaeologists can determine a lot about scabbard construction from these materials.

But the ground at the archaeological site is acidic, with abundant water flowage—not especially good for preserving organic materials, says Ystgaard.

Praise for the finder and the landowner

The archaeologists have high praise for the finder and the landowner. They have had positive experiences with Trondheim’s Metal Detecting Club, but not everyone who is out with a metal detector behaves as they should, and they risk destroying findings.

Magnus Meistad was out with his metal detector last year, actually looking for coins when he made the discovery. Meistad found the axe first, and he was unsure whether it was old. But when he uncovered parts of the sword, he had no doubt. He covered up both artefacts again, and then he notified landowner Arnt Olstad and contacted authorities. Perfectly done, say the archaeologists.

And so the wait began. Olstad and Meistad kept mum while the archaeologists raised the money necessary to excavate and conserve the find. People close by made sure that no one moved around the area unnecessarily.

After a few weeks the archaeologists received support to excavate a 3-meter by 3-meter square area from the Norwegian Directorate for Cultural Heritage. Here they uncovered the remains of a burial and several more discoveries.

Nearby they found two bronze pieces of jewellery that likely served as costume clasps and that appear to have belonged to a woman. The fasteners are of a type that archaeologists hadn’t seen before, which could mean one of two things: “Either the clasps come from afar, probably the east. Or locals created them,” says Vennatrø.

The clasps indicate that the woman who owned them had a certain status. It is easy to speculate how and why such objects from the east landed in Trøndelag county, or about women who may have moved long distances, even crossing borders.

But archaeologists are loath to do this.

On the contrary, none of them at this site would venture to say that the clasps have any strong connection with the discovery of the Viking man a few meters away. Although people who were buried here probably had some kind of connection to the same family farm, the owners of the objects may have lived at completely different times. Further investigations and surveys may eventually provide the answers.

But it was pure luck that there was any discovery at all.

The discovery site is located on cultivated land, and the plough furrows run parallel to the sword. Using photogrammetry, which provides a 3D representation of the site, you can see how close the objects came to being destroyed.

If you are reading this article on a powerful enough computer, you can even check this PDF of the discovery site. You can alsodownload a PDF of the shield boss here — granted, not in the same resolution that researchers have access to, but you get an impression. You can click on the picture, rotate it and turn it over and see how the sword and metal boss were found in the ground. Here you can read more about photogrammetry, which is rapidly changing the way archaeological sites are being mapped.